I'm a first year teacher, moving into a probability unit.

I was looking through my given materials, and think I've found two errors. It's been a long time since I've done probability and I don't want to ask staff for fear of sounding stupid.

I created a Word document that I took a screen shot of, in order to hopefully get some confirmation.

Anything inside the orange boxes are from my course materials, anything outside is work I did myself in Word. The red box on the right is just highlighting where I think the error occurs.

Any help would be greatly appreciated. 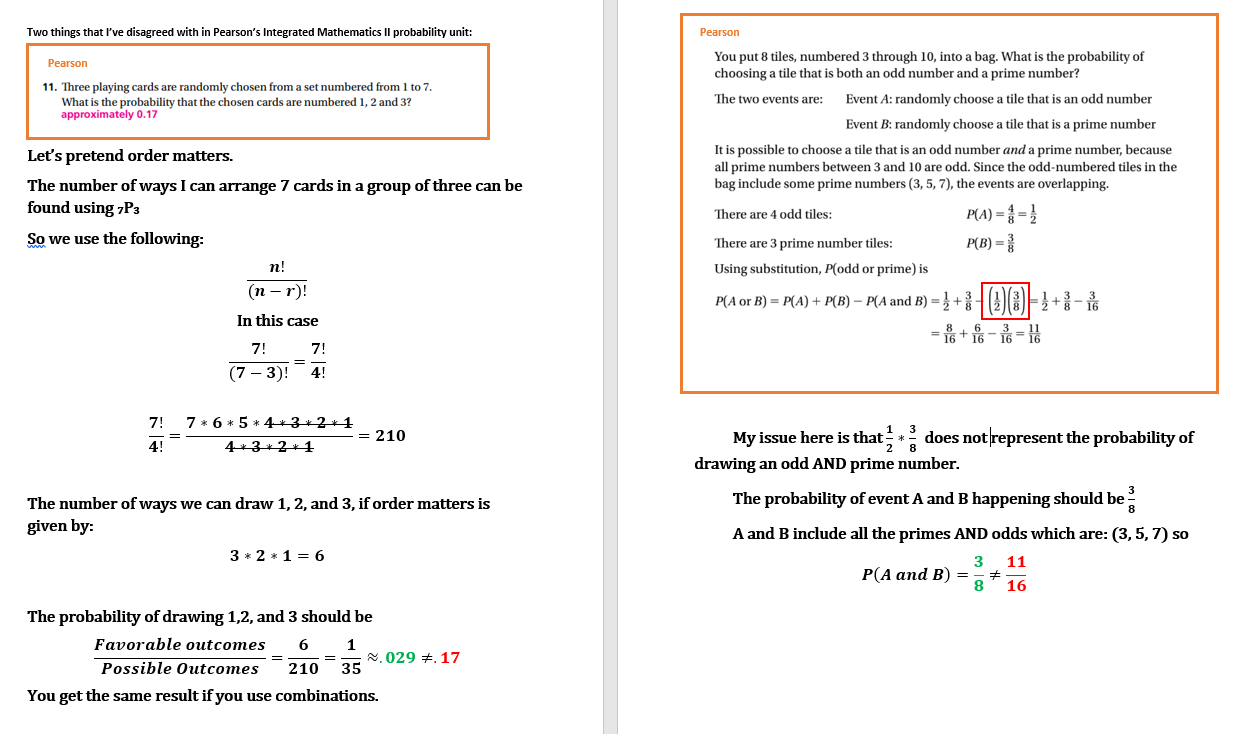 Not only you're right, but the second question is quite weird: the question asks for $P(A\cap B)$ when in the end the final result is supposedly $P(A\cup B)$. Moreover, $A$ contains $B$, which is never pointed out; the term "overlapping" is very misleading in this case. I would throw this material away or be very suspicious about every statement it makes if I were you.

I'm pretty sure its an error on the course materials. The ideas of a number being odd and a number being prime are dependent on each other (an even number cannot be prime unless it is $2$), so the rule $P(A)*P(B)=P(A\cap B)$ is not valid here (it's only valid for independent events). So: trust your instincts, you are correct.

What is truly amazing to me is how $11/16$ could be thought to be an answer in the second question. The provided solution at one point even explicitly lists out the $3$ odd primes in the set $\{3, 4, 5, 6, 7, 8, 9, 10\}$, and then after getting the correct answer, proceeds to continue on and perform completely irrelevant computations.

It should immediately obvious that, for a single choice from a set of $8$ numbers, the denominator of any resulting probability cannot be $16$.

I cannot even begin to speculate as to how $0.17$ was obtained for the first question, as a decimal answer gives little insight compared to a fraction.

As a teaching tool, I would advise that for the second exercise, you actually show the students how the teacher's guide went through the solution, step by step. Then ask at each step whether the reasoning was correct. If not, why not? Where does the solution break down? What would a correct solution look like? Approach it like a critique: students will be very interested in seeing that even a publisher of a textbook can make mistakes from time to time.

Both your answers are right, and it seems that the course material is wrong.

I figured the first one a bit different, but got the same answer you did.

When you pull the first card there is a 3 in 7 chance of it being a card you want.

Assuming success, when you pull the second card there is a 2 in 6 chance.

Again assuming success, when you pull the third card there is a 1 in 5 chance.

The odds of all three happening are an AND condition.

The second one is clearly self contradictory within the text. The story part says "AND" and the solution part says "OR".

Furthermore, the two conditions are not independent. If the number is a prime in that range, then it is odd, so the being odd condition is irrelevant. Since there are three primes out of eight numbers, your odds are $\frac{3}{8} $

Clearly you should view the rest of the material in this book with a skeptical eye.

Your answer is correct.

As Martin Argerami pointed out in the comments, the answer in the text is six times this, which suggests that the author(s) divided the $3!$ sequences in which the numbers $1$, $2$, and $3$ could be obtained by the $\binom{7}{3}$ ways of selecting three-element subsets of a set with seven elements.

What you cannot do is what the author(s) apparently did, making the mistake of treating the favorable outcomes as if order mattered and the sample space as if order does not matter.

You put $8$ tiles, numbered $3$ through $10$ into a bag. What is the probability of choosing a number that is both an odd number and a prime number?

You correctly determined that $3$ of the $8$ numbers are both odd and prime. The authors inexplicably treated the events of being odd and being prime as independent events even though an integer larger than $2$ can only be prime if it is odd.

You can use this example to demonstrate that probabilities can only be multiplied if events are independent.

Your correct answer to that question also allowed you to correctly answer the question the author(s) meant to ask:

You put $8$ tiles, numbered $3$ through $10$ into a bag. What is the probability of choosing a number that is an odd number or a prime number?

It is disheartening that the text was published with these errors. Please send the publisher a list of errata. Since the errors are present, you can critique them in class so that your students know to avoid making such errors themselves.