a) Compute the first 4 terms of its Fourier cosine series explicitly.

I don't think brute force is a solution

Can somebody help me?

Well, definitely, there has been some confusion around.
Let me try to put some order. I will deal the case "enginering-wise", although rigorously enough.

So your function looks like in the following sketch

The fact that $\phi(x)$ is mathematically undefined at $x=0,1$, but has there finite left and right limits, is somehow irrelevant to the Fourier series, which being continuous will (intuitively speaking) provide and "fill the gaps". It is in fact well known that the Fourier series at the discontinuity points (if "finitely many") takes on the average value between the left and right limit: that is the Dirichlet Theorem already mentioned. Have a look at the reference for a rigorous definition.
Thus in our case the Fourier series (the complete one, with infinite terms) will converge at $1/2$ for $x=0$ and $x=1$.
(the first four terms, for $x=0$ return $\phi(x)=0.5288..$). 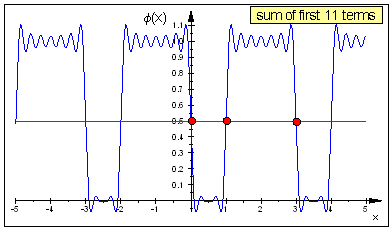 From MoonKnight comments we can deduce the following

Not the answer you're looking for? Browse other questions tagged real-analysis sequences-and-series summation fourier-analysis fourier-series or ask your own question.