Intuitive thinking of differential forms in terms of gradient, divergence and curl?

Is there a way to visualize the differential forms -

How do I visualize the above, is it intuitive?

I will try to give a visual representation of forms and provide intuition into exterior derivatives using Stokes' theorem:

A differential 1-form $\alpha$ is pointwisely a "covector", a function $\alpha|_p$ which assigns a real value to each vector tangent to $p \in M$. This assignment is linear: 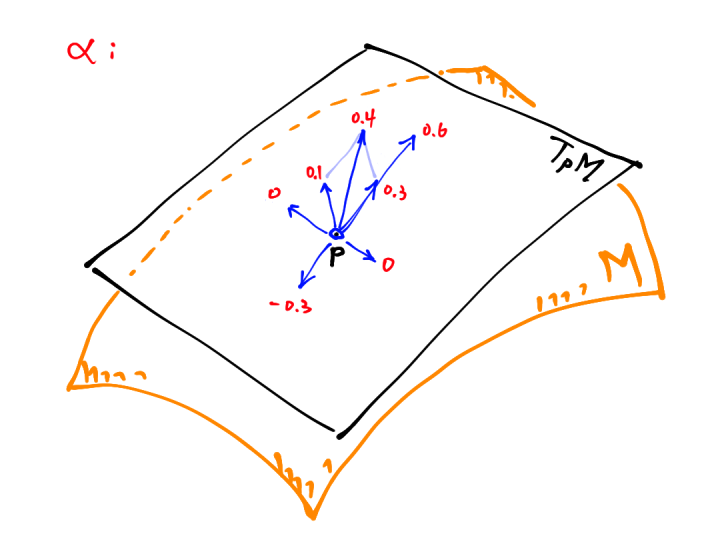 In the picture above, no covectors are drawn, but only vectors. This is because unlike (column) vectors, covectors are linear functions $\mathbb R^n\to \mathbb R$, which are hard to draw.

However, a covector may be regarded as a "row vector" since a linear map of the type $\mathbb R^n\to \mathbb R$ is equivalent to a left-multiplication by some $1\times n$ matrix. So if needed, one could still draw an arrow (column vector) $v$ that represents the function $f(x) = \langle v, x \rangle$ or $v^T$. 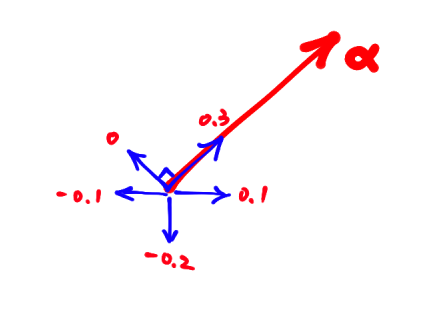 Although I draw arrows for covectors, I agree with John Hughes that covectors (dual vectors) should be regraded as functions rather than arrows eventually, to get a really suitable intuition.

Likewise, a 2-form $\sigma$ is pointwisely an alternating linear map (which we call a 2-covector) that assigns to each pair of vectors a real number ... 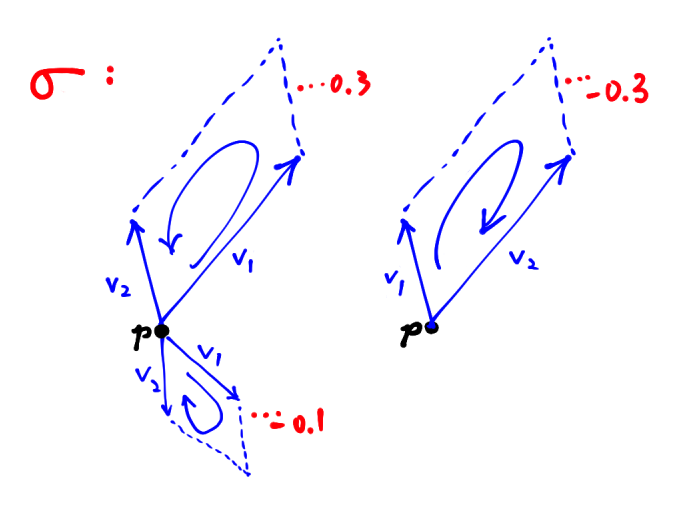 Recall that for a 1-form $\sigma$, we draw an arrow representing a covector at each point $p \in M$. For a fixed $p \in M$, this arrow points in the unit direction for which the linear function $\sigma|_p$ attains a maximal value. Similarly for 2-forms, we can associate to each $p \in M$ an oriented parallelogram (with fixed area) in the direction that attains the maximal value. 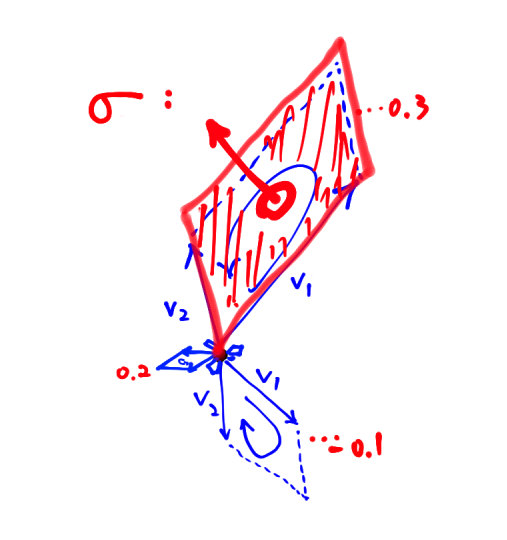 The directions of the faces representing 2-covectors form a vector field, which is how people regard a 2-form as a vector field that points the directions in which a parallelogram can get a maximal value, but now we know that that's somewhat different. 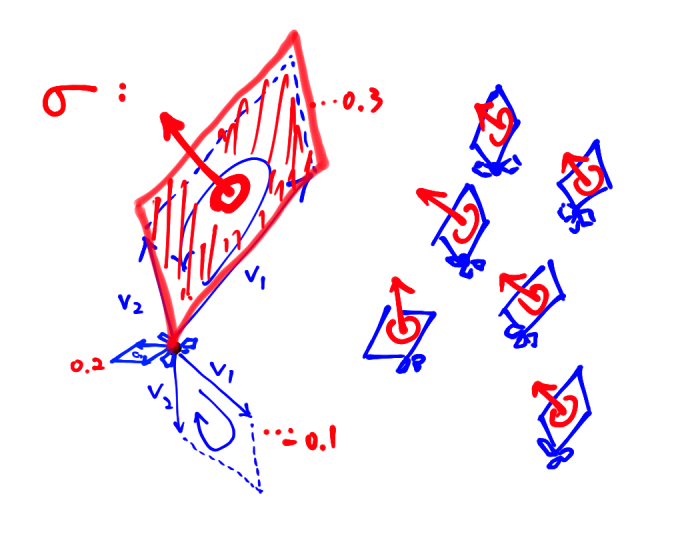 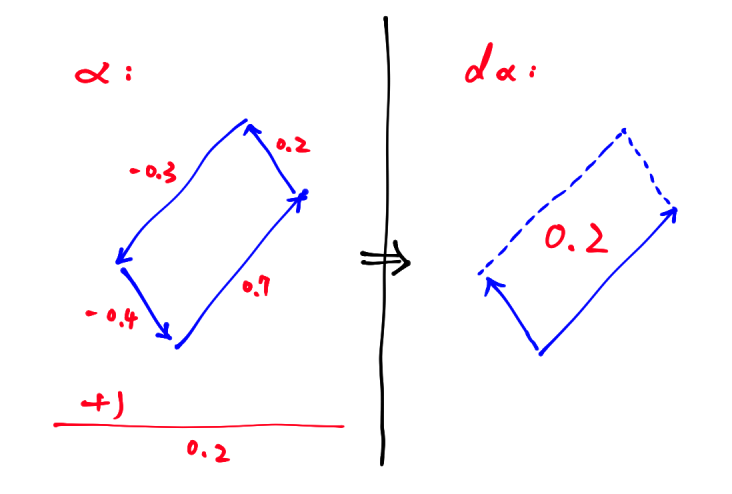 However, in general it isn't possible to embed a parallelogram in any manifold $M$. Moreover, $T_p M$ and $M$ are not always assumed to lie in some ambient space. So ... maybe it is better to leave it as a mere intuition.

This also shows that: if the set of arrows representing the 1-form $\alpha$ rotates counter-clockwisely in the same plane of the parallelogram, then $d\alpha$ assigns a positive value to the parallelogram (curl). 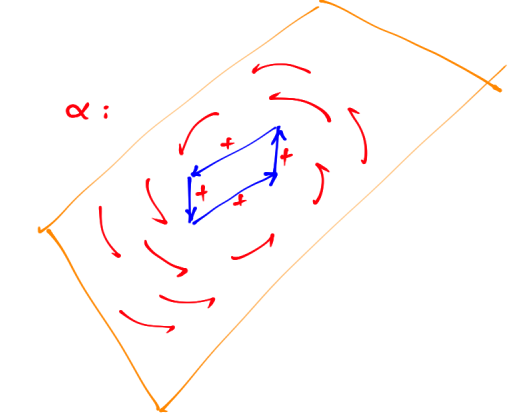 (This picture may be misleading: even if the closed path does not contain the center of rotation, it is still possible for the integral to be positive.)

A differential 3-form gives each parallelepiped spaned by three vectors a value. 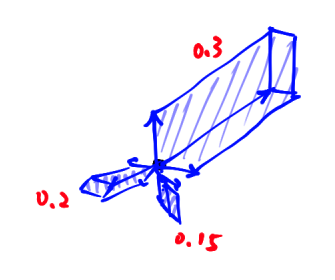 Likewise, a two form $\sigma$ can may assign values to the boundary of a parallelepiped. This induces a 3-form $d\sigma$: 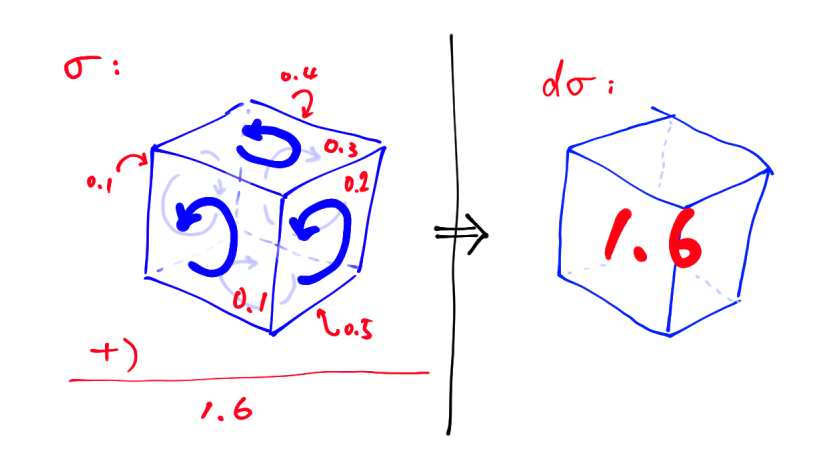 Note that the boundary of the parallelepiped in this example is positively oriented, i.e. every normal vector points outward.

We have shown that a 2-form can evaluate a parallelogram (spanned by $v_1,v_2$) via the inner product $(p,q,r) \cdot (v_1 \times v_2)$. So, if a vector field representing a 2-form $\sigma$ has divergence, then $d\sigma$ (integration along the boundary of a small 3D region) is positive. 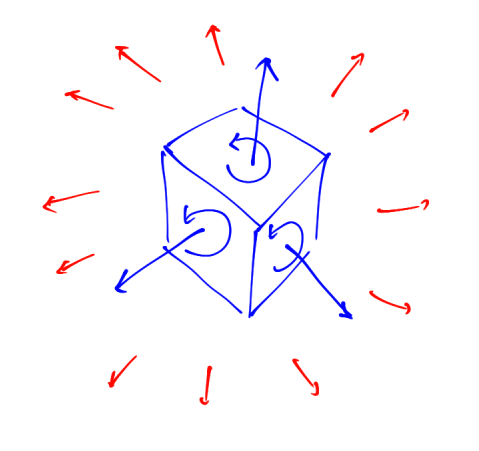 For simplicity, I drew a polyhedron rather than a 3D region with smooth boundary.

Because the integrals along the edges of the polyhedron cancel out, summing $d\alpha$ over each face, i.e. $d(d\alpha)$ yields zero. 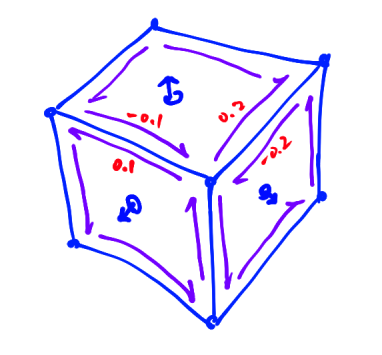 In fact, the operator $d$ is designed (along with the definition of alternating $k$-forms) to generalize the various notions of "derivative" that already arise for functions and vector fields. As for "visualizing," I don't think I can help except to say that these things are natural generalizations.

That intermediate map represents a duality between $k$-forms and $(3-k)$-forms in 3-space. (When you say $d\sigma$ represents the divergence, you're implicitly transforming $dx \wedge dy \wedge dz$ to the constant function $1$, which is the duality from $3$-forms to $0$-forms). In general, $k$-forms and $(n-k)$-forms are "dual" in $n$-dimensional space, and it's tempting to use this duality to think of 2-forms as "really being 1-forms", etc. I advise against this, and suggest you try to develop some intuition for 2-forms as things that consume two tangent vectors, while 1-forms consume 1 tangent vector, etc. It'll pay off in the end.

The other thing to realize is that 1-forms and vectors are different, just the way that the vector space $V$ and the vector space $V^{*}$ of all linear maps from $V$ to $\Bbb R$ are different, even though (for finite dimensions) they're isomorphic. We would call things in $V$ 'vectors' and things in $V^{*}$ "dual vectors", because they consume a vector to produce a number.