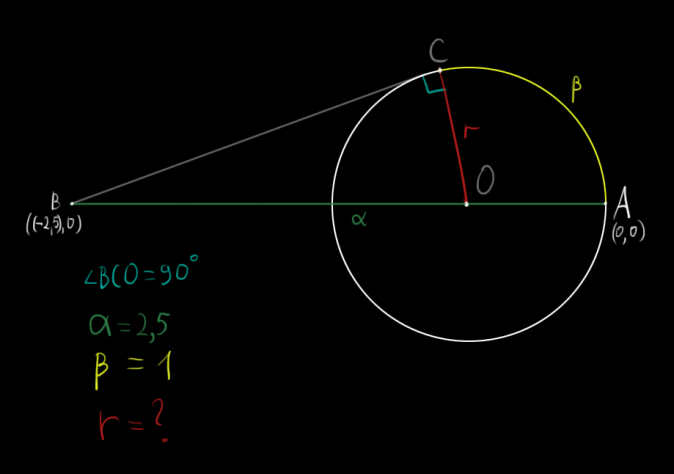 To determine $r$, I used Pythagoras and trigonometry to find that:

Plotting on WolframAlpha, an approximation of $r$ is $0.54$, which is what I get on Geogebra.

So I guess here's the final result: given any construction as above, one has from $(1)$:

So, we look at $\beta$ as a continuous function of $r$ for now. Playing with Geogebra, I noticed that $\beta$ is increasing. If I'm not mistaken:

By the intermediate value theorem, this means that for any $\beta\in\left(0,\dfrac{\alpha\pi}{2}\right)$, we can make such a construction for exactly one possible $r$, which we can calculate numerically for specific examples.

Given length $ \alpha= AB = 2.5 $. We can use two standard results: Tangents property (power) of a circle .. product of segments from external point $B$ is square of tangent length, and, the Pythagoras theorem before simplification:

By virtue of this identity and from what is given in the question no particular solution exists. I.e., the circle can then have any radius.

So we are free to choose radius $r$ entirely satifying the another basic arc length $ \beta=1$ (subtending arc $\angle AOC$ at center of circle):

This transcendental equation can have only a numerical solution which is:

The geometric data is drawn to scale below: 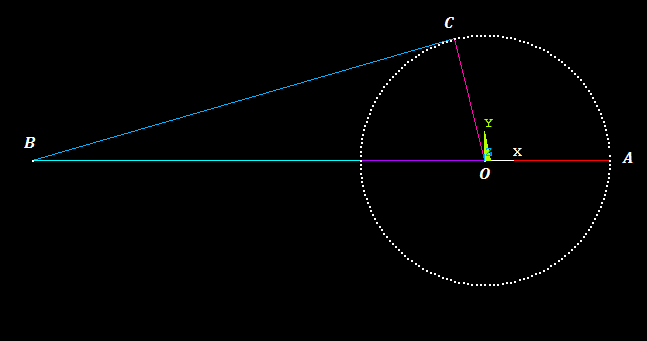 I think this problem as stated may have no solution ! I'm not completely sure about this but it's easier to post as an answer so here goes.

I don't have an analytic proof for this locus, but I found it in geogebra by drawing a conic through 5 points, each of which was such an arc, and then drew a few more such arcs just to check. Most of these aren't shown in the diagram, but they are there. Assuming this elliptical locus is correct, then your point C has to lie on the ellipse in order to have $\beta=1$.

The next observation is that the point $C$ has to be the nearest point to Y lying on $p$. This is because that is the only point on $p$ such that the tangent to $p$ at $C$ will be orthogonal to $YC$, a requirement if $YC$ is to be a tangent to the circle (i.e. $\beta$ must intersect $p$ orthogonally at $C$). I should note that I realize that this argument may be flawed: If orthogonality is not actually required and $YC$ can still be tangent to the circle arc at a point on $p$, there may still be a solution. One thought I had was, similarly to the locus of arc endpoints forming an ellipse, to look at the locus of tangents from $Y$ to the family of circles whose arcs form the possible $\beta$'s. My hunch is that that locus could not possibly be exactly identical to $p$ for a portion of $p$, and then deviate elsewhere (clearly it is not the whole ellipse).

I'm not completely satisfied with this as an answer: the elliptical locus needs to be proven (maybe to work with the coordinates you generated for $C$ and to show that they describe an ellipse), and I suppose I'd have to say it's more of an increasingly strong hunch that there is no solution as stated than a proof! I'm wondering if the length of $\beta$ is allowed to vary, if then there is a solution? 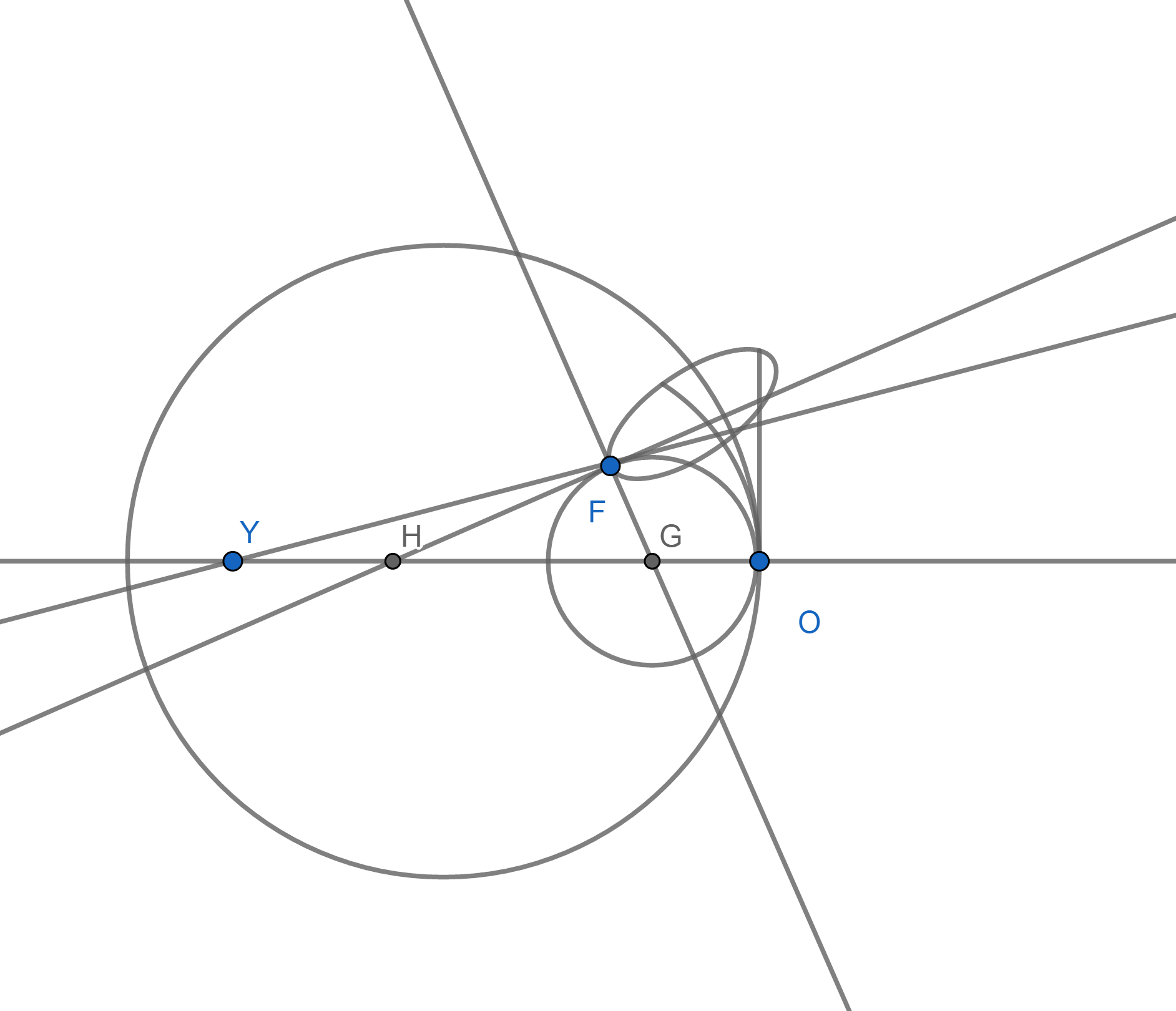 Here is a drawing using Narasimham's numbers to precision of 5 -- with a 7 degree discrepancy in the angle. The grey and blue points close to each other correspond to the tangent at $107^{\circ}$ and the $\beta$ endpoint at $100^{\circ}$ (precision 5 in drawing), the latter obtained by using $\frac{\beta}{r}$ radians. Narasimham's formula looks right but I'd like to be able to demonstrate it and cannot. 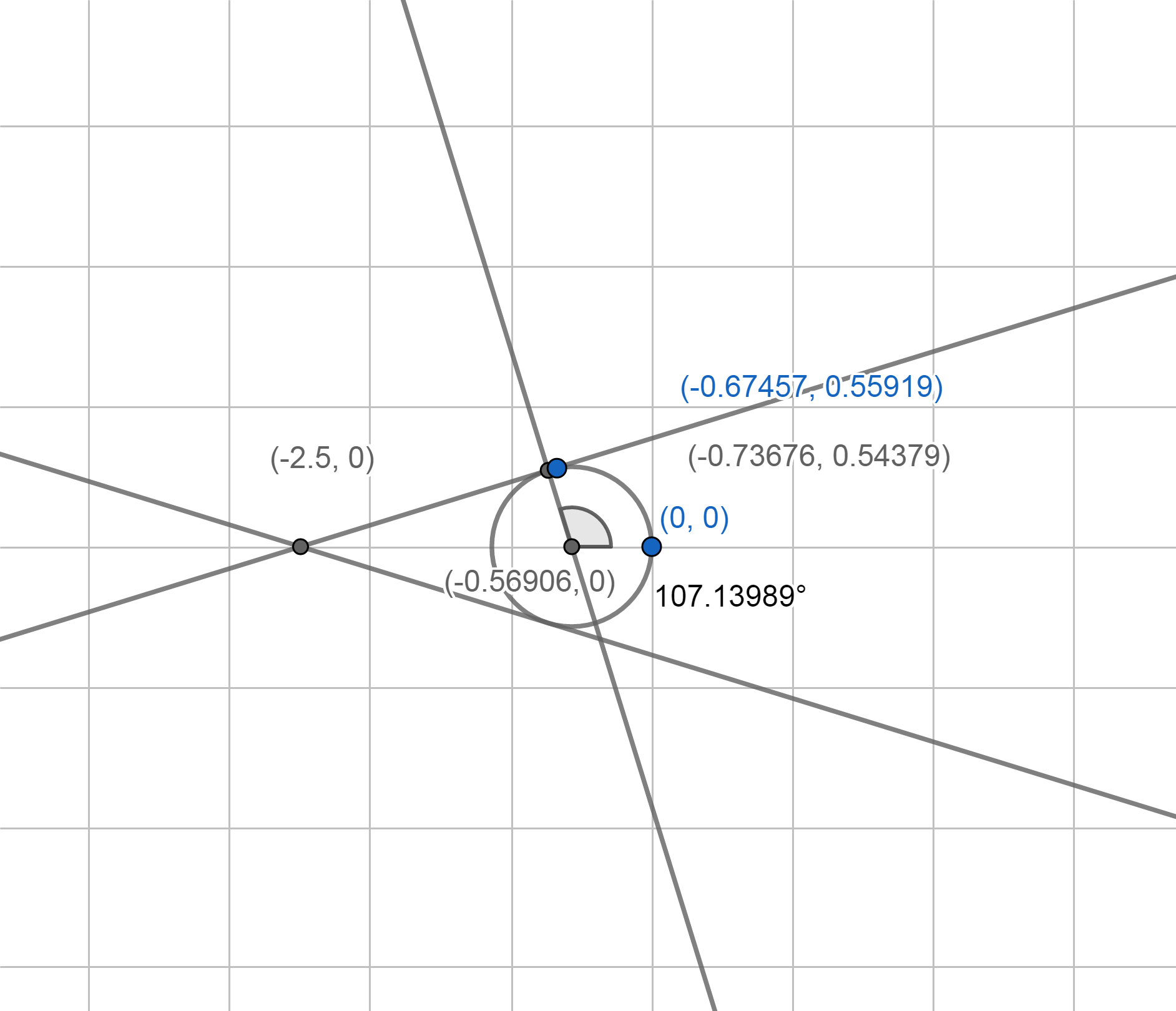 0
Shortest expression for the diagonal in a convex non-cyclic quadrilateral knowing its sides and the other diagonal?
1
Simple Golden Ratio Construction with Three Lines, and Interesting Implied Circle?
5
Geometry homework question - enough data?
0
Can a circle of transcendental radius or a line of transcendental length be constructed?
0
Multiplication of angles on the unit circle?
2
Are $M, P, N $ collinear?
1
Prove that distance between foot of perpendiculars from an arbitrary point on circle to two given diameters is constant.
1
Given that $\sin \angle BOC = \frac{4}{5}$, $AC=24$ , find $[\triangle BDE]$ .