System identification of a resonant system

I want to write a matlab script that would identify a system from it's inputs and outputs. I have so far had good results with simple systems, but with this slightly more complex one I'm not able to arrive at the original equation. To do identification, I use a chirp signal and collect output data that covers a range of input frequencies. I then use arx() to estimate a transfer function from the input data.

My octave script is as follows:

Short of an error from arx about matrix A being unstable the approximation is 100% accurate (error is due to the fact that I'm using second order approximation on a system Alt1 which is really a first order system so this is irrelevant. If I pass 1 as last argument to arx this error disappears).

However, if I try to do the same experiment with Alt2, which has a resonance at around 25Hz, the method fails:

The estimated transfer function is way off the target.

What is going on? Why am I not able to identify the second system using this method? Is it because I need more data around the resonance? How can I get an accurate estimate of the second system?

I think the problem was that arx identification algorithm is just not suitable for solving discontinuous models. I changed algorithm to moen4 with same order and got the perfect solution. 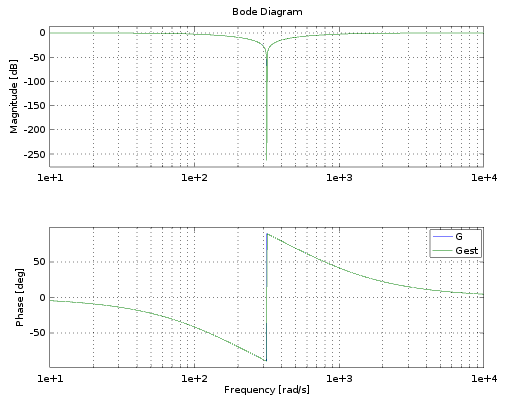 Not the answer you're looking for? Browse other questions tagged dynamical-systems matlab octave system-identification or ask your own question.