I've recently been studying for qualification exams for my master's program. I've run into a few problems that I'm stuck on and hope that I can get some help here.

I haven't learned anything about nonlinear PDEs/waves and don't know where to start with this problem. The only thing I can see is that the PDE can be transformed into the following: $$u_t + (1 - 2u)u_x = 0$$

Thanks in advance for any help!

A good resource is Evan's book on PDE; he has a section on the method of characteristics. The basic idea is as follows. Given any suitable PDE with boundary conditions, we may turn this PDE into a series of ODE as follows. We pick a point $(x_0, 0)$ in the boundary (so here, the "boundary" is time $t = 0$). It would really be great if there were some path $y(s)$ connecting $(x_0, 0)$ to an arbitrary point $(x, t)$ in the interior (i.e. for time $t > 0$), and then set up an ODE along this path.

Again, the general theory is helpful to see why, but that is a whole section in Evans' text. I will try to give a very brief introduction here.

It is now a matter of integrating $\dot{z}$ along these curves to find the solution $u$. For a very good illustration of the method of characteristics, try solving the transport equation with constant coefficients, also in Evans.

As for shocks, I'll just suggest Evans, since this answer is already very long.

Let us introduce the function $f : x\mapsto u(x,0)$. A good start with such initial-value problems for transport (hyperbolic) equations is to draw the characteristic curves in the $x$-$t$ plane, obtained through the method of characteristics. These curves have equation $x(t) = (1-2f(x_0))\, t + x_0$: 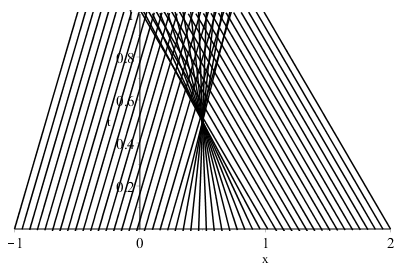 N.B. : this is the LWR traffic flow model.

Not the answer you're looking for? Browse other questions tagged partial-differential-equations characteristics hyperbolic-equations transport-equation or ask your own question.