I have 2 similar problems. The first one:

EDIT It is not correct. I need to use horizontal integration right? So it would be:

I don't even know how to set this up. Any hints?

You're not going to get anywhere if your approach to problems is a hit-and-miss "can we try vertical integration here?" "okay, what about horizontal integration?"

Instead, you should actually understand what the region looks like, and then use that to set up an integral for the area.

In this case, the parabola and its tangent line look like 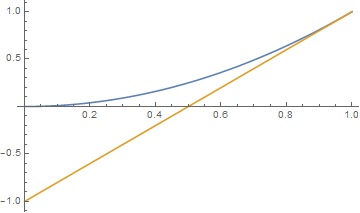 and this should tell you why your first integral with respect to $x$ doesn't work: it includes the entire area between the blue and orange curves, which also counts a large triangle below the $x$-axis.

So you have the following approaches:

Not the answer you're looking for? Browse other questions tagged calculus integration definite-integrals area or ask your own question.