A way to directly see that the interior angles of triangle sum to $180^\circ$?

I'm looking for a way to look at a triangle, and perhaps visualize a few extra lines, and be able to see that the interior angles sum to $180^\circ$.

I can visualize that supplementary angles sum to $180^\circ$. I'd like to be able to see the interior angle sum similarly...

I can see that the exterior angles must sum to $360^\circ$, because if you walked around the perimeter, you would turn around exactly once (though I can tell this is true, I don't really see it). I also saw a proof on KA, where the exterior angles were superimposed, to show they summed to $360^{\circ}$ (though I'm not 100% comfortable with this one).

But I find this algebra hard to see visually/geometrically. Is there proof that enables one to directly see that the interior angles of triangle sum to $180^\circ$?

A couple of secondary questions:

Since that fact about the angle sum is equivalent to the parallel postulate, any visualization is likely to include a pair of parallel lines. Here's one from wikipedia: 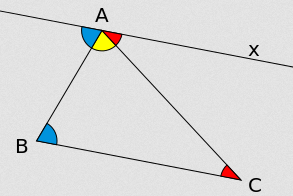 Ethan Bolker's answer is the standard proof, but a more visual way to see the result is to tile the plane with copies of your triangle. It is so effective, I will not even include a drawing.

Just think about it... the tiling is made by three sets of parallel lines in the directions of the triangle sides, and they meet at vertices of the tiling, where you will then find two copies of each angle.

Edit. By popular request, there's a picture below:

Edit 2. I like Steven Gubkin's answer better :) That is what I used to call the "near-sighted method" 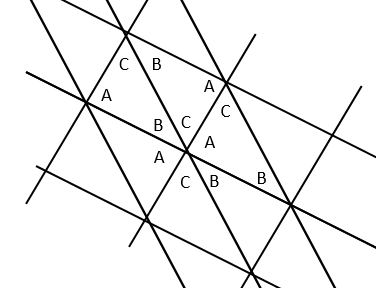 This is very similar to Ethan Bolker's and Rodrigo A. Pérez's answers, but I made a small animation to illustrate a version that I like.

Draw a circle around a triangle. The central angle of each vertex is twice its size and the three central angles make the full round, that is $360$. Hence, the sum of interior angles of the triangle is one half of $360$, that is $180$.

Not a proof, but a nice way to "see it" dynamically: extend the sides of the triangle so you can see their exterior angles. 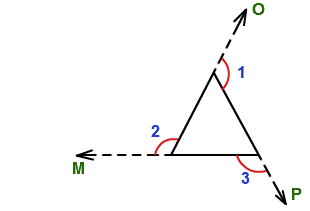 You could also think of the angles sliding along each other similar to how a camera shutter closes.

If you draw the triangle on a piece of paper, then cut off each corner, you can rearrange the corners so that the angles add up to a straight line.

Here is my simplest visual explanation courtesy of Paint: 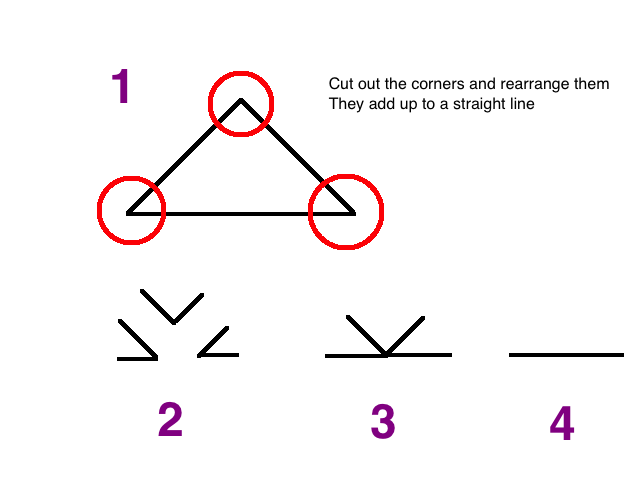 In a similar vein to your walking around the exterior and obtaining an external angle sum of 360 degrees, you can do the same by "walking" inside the triangle. The demonstration is best with physical barriers for sides.

Make a triangle using for example, blocks of wood or standing cardboard. Place a pen inside one corner against one side. Record the pen's orientation. Slide it along the side it is touching, and when you reach the end, swing it inside the triangle to rest against the other side. Repeat until the pen is back in the same position it started.

This process can be extended to demonstrate physically the internal angle sum of any shape with two or more sides - for two sides the angle is zero as the pen cannot spin at all and for quadrilaterals or higher the angle is given by the usual formula, observed as one complete spin for every 360 degrees.

It isn't a proof, but if you fold the bottom two angles in, then fold the angle opposite the base down, it will just fit together with the other two to form a straight angle. Try it with a piece of paper. Rather nifty.

The proof I know and like is the one in Ethan Bolker's answer.

I've reflected it, and used colours to try to to match the top answer here.

Though asymmetric, it's useful in proving other theorems, as it also shows: an exterior angle equals the sum of the opposite interior angles (blue and red).

Every triangle could be inscribed in a circle.

Each inscribed angle measures half the arc opposite to it.

The angle sum of the triangle inscribed in a circle is half the total arc measures around the circle.

The total arc measures around a circle is $360$ degrees.

Imagine a triangle $ABC$ with two of the sides, say $AB$ and $BC$, rigid but meeting at the joint $B$, which is movable in the plane of the triangle, like a hinge sort of (also, you may fix one of these rigid sides, say $BC$, and rotate the other). Let the side $AC$ be made of a sufficiently elastic material (at least so that $AC\leq AB+BC$ ).

If you play with this imaginary object, you should soon see that as you increase $A \hat B C$, the other two angles eventually diminish (certainly for $A \hat B C>π/2$). Indeed, you may extend $\angle ABC$ as wide as you please close to $\pi$, so that the two rigid sides approach a single rectilinear segment; then the angle between them becomes arbitrarily close to $π$ and the other two angles are vanishing; in the limiting (degenerate) position the side $AC$ coincides with the segment formed by the rigid sides.

If you can already see that any point in this sequence of transformations of $\triangle ABC$ the sum of angles is conserved, then it is clear why for any triangle this sum is always $π$.

This explanation makes it clear why this particular theorem about triangles in the plane is deeply connected to the parallel postulate.

Edit. An even shorter way to see the connection to the parallel postulate is this. Let a straight line fall on two straight lines so that the two interior angles on one side of the transversal are less than supplementary; we have three lines here. Keep the transversal and either of the other two lines fixed, then rotate the last about its point of intersection with the transversal so that the two angles in question gradually approach supplementarity. Now, at all times when they're less than supplementary, we always have a triangle on that side (by the postulate). As you make the angles closer to supplementary, the distance from the transversal to the point where the lines meet increases indefinitely (and the angle at that meeting point becomes smaller and smaller). In the limit when the lines are parallel (i.e., they don't meet anywhere), the angles in question are just supplementary.

If you accept that the sum $S$ of angles is the same in every triangle there’s another proof. Choose a point $D$ on $AB$. Now the sum of angles in the triangles $ADC$ and $DBC$ is $2S$:

Not the answer you're looking for? Browse other questions tagged geometry visualization or ask your own question.

3
A way to directly see the Inscribed angle theorem? (i.e. central angle is twice the inscribed angle)
1
Visual proof of isosceles base-angle congruency?
0
A more direct way to see that the angle inscribed in a semicircle is $90^\circ$?

2
Rotations and the parallel postulate.
0
Sum of Interior Angles of a Triangle
4
Prove that the straight line joining the middle point of the hypotenuse of a right angled triangle to the right angle is equal to half the hypotenuse.
3
Does the sum of exterior angles of a simple, convex polygon truly = 360°?
3
A way to directly see the Inscribed angle theorem? (i.e. central angle is twice the inscribed angle)
4
Neutral geometry: If one triangle has angle-sum $180^\circ$, then all triangles have angle-sum $180^\circ$
0
Why is a exterior angle of a triangle equal to the sum of the opposite interior angles?
1
Why is the sum of all external angles in a convex polygon $360^\circ$ and not $720^\circ$?
0
Why the sum of interior angles of any concave or convex polygon is 180×(n-2)°? How to prove this?