Distinguished map that straightens a curve

Consider a smooth finite curve $\gamma$ without intersections in $\mathbb{R}^2$. Consider the family of smooth maps $T:\mathbb{R}^2\rightarrow\mathbb{R}^2$ such that $T(\gamma)$ is a straight line.

Which ways are there to distinguish one of these transformations as the one (straightening map of $\gamma$), e.g. the one closest to the identity transformation?

How could this transformation be constructed from $\gamma$?

Consider a straight line $PQ$ and all other curves $\gamma$ connecting $P$ and $Q$, each of them approximating the straight line better or worse according to a given distance function $\delta$ between curves.

Up to composition with a similarity, there is a unique conformal map of $\overline{\mathbb C}\setminus \gamma$ onto the complement of a line segment; by the Riemann mapping theorem. However, this map will not have a continuous extension to $\mathbb R^2$ unless $\gamma$ is already a straight line. This is because smooth curves are removable for continuous holomorphic functions: if a function is globally continuous and is holomorphic on the complement of a curve, then it's globally holomorphic. On the plus side, there are numerical methods for constructing conformal maps, it is not just an abstract existence assertion.

I do not know of an easy way to create a distinguished global diffeomorphism that straightens out a given smooth curve. The first thing that comes to mind is to minimize $F(T)=\int_{\mathbb R^2} \|DT-I\|^2$ among all such diffeomorphisms: i.e., look for the least squares approximation to the identity. The functional is convex but the set of admissible maps isn't, hence there is no guarantee that the minimum will be attained at a unique point, or at all. We can always take a sequence $(T_n)$ such that $F(T_n)\to \min F$, but the limit may fail to be smooth on $\gamma$, or to be injective.

Yet another approach is to begin with a canonical map between $\gamma$ and a line segment (i.e., a length-preserving one), and try to extend it to a diffeomorphism or at least to a homeomorphism. There are extension methods, but they are neither very explicit nor canonical. This paper comes to mind; unfortunately behind a paywall and in any case it deals with curves and maps of low smoothness.

In other words, $v_i$ is the harmonic extension of $u_i$. In yet other words, it's the solution of the Dirichlet problem with boundary data $u_i$.

Now let $T(x,y)=(x,y)+(v_1(x,y),v_2(x,y))$. This map is continuous on $\mathbb R^2$, infinitely differentiable outside of $\gamma$, and agrees with $f$ on the curve $\gamma$. Its surjectivity can be proved as follows: since $v_1,v_2$ are bounded, the image of a sufficiently large circle under $T$ will be roughly a circle of about the same size (it will loop around the origin and neighboring points, in particular). The key words here are winding number and degree theory. Nothing guarantees that $T$ will be injective, but if $\gamma$ is not too wiggly, it might be.

From the computational viewpoint, solving the Dirichlet problem isn't hard (Matlab is really good at it), but an explicit analytic solution is unlikely to be found. The chances of getting an explicit formula are greater if one exchanges the roles of $\gamma$ and $I$ in the preceding argument: that is, begin with a length-preserving map $g:I\to\gamma$, extend $g-\operatorname{id}$ harmonically to $\mathbb R^2\setminus I$, then add the identity map $\operatorname{id}$ back. The advantage is that solving the Dirichlet problem in $\mathbb R^2\setminus I$ is easier. This is because $\mathbb R^2\setminus I$ can be conformally mapped onto the unit disk by an elementary function (inverse of $z+z^{-1}$, up to scaling), and on the disk the Poisson kernel is known explicitly. 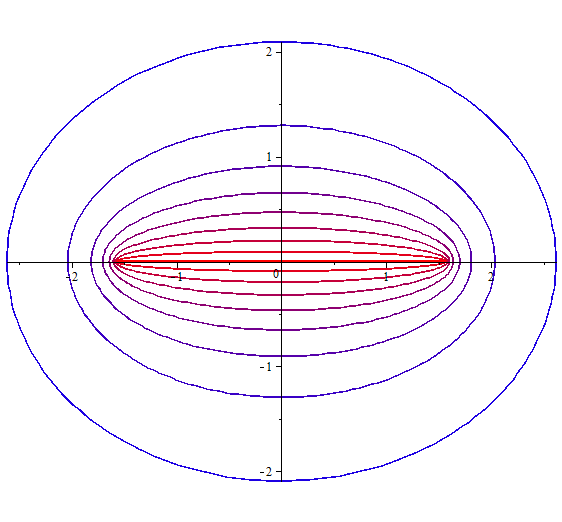 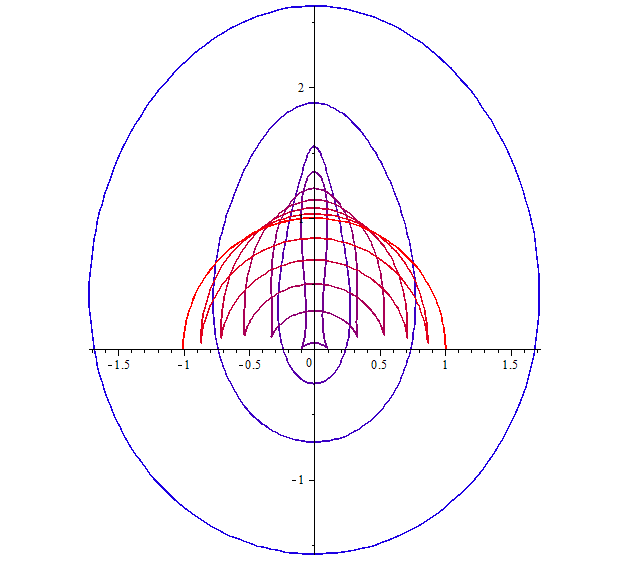 Clearly, the map is not injective and not even open: there is a lot of folding going on.

Images were made in Maple 16, the code is below. (j/9)^(1/2) is the radius of the jth circle to be drawn; chosen to produce reasonable spacing of the curves. The series in the formula for $\widetilde S$ was terminated at $n=6$, where the terms got very small.

Maybe one should restrict the question to this family of curves and maps that isometrically straighten the "curve" $f_0$. (Ideally there is just one such map?)

36
Which sets are removable for holomorphic functions?

3
Huisken's distance comparison principle and type II singularities.
2
Is there a "distinguished" parametrization of a surface in $\mathbb{R}^3$
2
Does an immersed curve have to be "curve-like" somewhere?