How to find the speed of a river when an object is moving over it?

An air force pilot navigates across the Amazon river aboard an inflatable rescue lifeboat. He spends $\textrm{4 hours}$ by going in the same direction of the current to cover $\textrm{72 kilometers}$ between his landing site to the nearest town. Later on, he returns to his landing site spending $\textrm{6 hours}$ by going against the river stream. What is the speed of the river if we know the speed of the lifeboat and the river are constant?

In my attempt to solve this problem I sketched the situation in Figure A. 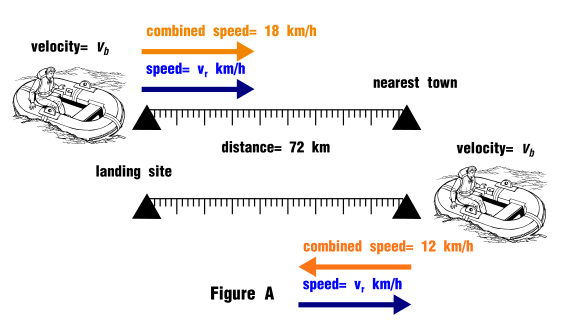 I defined the speed of the lifeboat as:

and the speed of the river stream as:

For constant speed the equation is the following:

Since I'm assuming it departs from the center of the axis $\textrm{(0,0)}$ the equation becomes into:

Initially I thought that the speed of the lifeboat was this:

However after some deeper thought I said that this cannot be as the speed of the boat is influenced by the stream as it mentions going downstream and not in water at rest so I changed the equation to take into account the speed of the river.

Since both are in the same direction I thought to summing them up and by doing this the new equation became into:

and when the lifeboat goes upstream would be the difference in other words the speed of the stream subtracted from the lifeboat, therefore becoming into:

By solving the system:

Therefore the speed of the river stream is $3\,\frac{km}{h}$. However I'm not sure if what I did was correct. Also, is it okay to assume velocities going in the same direction should be summed and when they're in opposite should be subtracted? The answer I got is somewhat reasonable as I do not expect that the river has a really big speed. But what if the stream speed is larger than the speed of the boat? can this situation happen? would this affect the way how I did approached this problem?. Can someone help me to clear these ideas?.

Your calculation is indeed correct.

To be able to travel in the opposite direction, your boat needs a faster speed than the river. Otherwise, imagine someone who push you backward $2$ steps whenever you try to move forward a step, if the destination is in a straight line and not a loop, you can't reach the destination. Hence you won't have the second equation.

There are three different speeds alluded to in the problem

Base Speed: $v_b$ how fast the boat would travel on its own solely under its own power.

Not the answer you're looking for? Browse other questions tagged algebra-precalculus physics word-problem or ask your own question.

0
Identifying Quadratic equations from collected information
0
River boat round trip
0
Precalculus: Velocity addition
0
Is there a unique solution to this upstream/downstream canoe rowing proposition?
0
How far is it from $A$ to $B$
1
Steaming on a streaming river
0
How do I find the displacement of a particle at a given instant when the initial speed is not given?
0
How far from its original position is the boat now?