In this video (which I've only watched once, so maybe I missed something), Bill Thurston illustrates the topology of knot complements in a fanciful way.

First he displays a large unknot (i.e. a circle of wire), and asks us to imagine that when you step through the wire, you are transported to a sort of mirror universe (which he calls Narnia).

I assumed at first that he wanted us to imagine that we live in the universal cover of the knot complement, so that stepping through to Narnia means traveling to another sheet of that cover. But this is clearly not what he means, first because there is only one Narnia (as opposed to countably many of them) and second because he says you can walk through the loop in either direction, and you'll reach the same place either way.

But next, he replaces his unknot with a trefoil, illustrates two particular loops called $A$ and $B$, and in essence proves that $A$ and $B$ generate the fundamental group of the knot complement, with relations $ABA=BAB$. He then says that passing through the knot allows us to pass to a total of six copies of our Universe, corresponding to the paths $A$, $B$, $AB$, etc.

Well--- once again, these can't be sheets of the universal cover, because there are only six of them. So once again, my next guess is that he's envisioning a cut-and-paste job. But then why has he pasted together exactly six copies, no more and no less? He has, at this point in the video, called our attention to six particular elements of the fundamental group, but there seems to be no mathematical reason to single these out. Exactly what has he cut and pasted together here, and how and why? Or is he doing something else entirely? 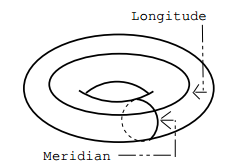 (Image from an answer by @AlexProvost.)

For the trefoil, he is constructing the cyclic branched cover (of two sheets -- note that this doesn't mean only a double cover, but that each generator only has order two). I don't know much about this construction. There is a relation with orbifolds. The group relation $ABA = BAB$ appears in the trefoil knot group (Rolfsen 3.D.8, discussed more below) computed from the Wirtinger presentation. (In fact, the trefoil is the example at the link given.) So he first shows there just two meridians take us everywhere we can go and then wanders through the cyclic branched cover by going around them in different orders. He essentially has the group of deck transformations $$ \langle A, B \mid A^2 = 1, B^2 = 1, ABA = BAB \rangle $$ (This group is the symmetric group on three symbols. An isomorphism is $A \mapsto (12)$, $B \mapsto (13)$, so $AB \mapsto (23)$, and the rest is just multiplying permutations.) If we start at the top of his diagram and number the six vertices clockwise, $A$ corresponds to the deck permutation $(12)(34)(56)$ and $B$ to $(16)(23)(45)$.

Rolfsen, "Knots and Links" has more on:

I do not know much about these branched coverings and could not figure out what that hexagon means, but I think $A$ and $B$ are referring to the generators in Dehn presentation of the knot group.

In the Dehn presentation, assuming that we are looking at the knot from the front, one takes a generator for each region in the diagram. For generators, you take a directed line segment starting from the front, going into the region and going back. Then you connect two endpoints of the segment somewhere outside far from the knot. The relations come from the crossings.

Unfortunately, I do not know a good reference for Dehn's algorithm, it is left as an exercise in some books.

12
What is the degree of an n-fold branched cover over a trefoil?
1
Number of cycles in a homology basis

9
Putting Geometries on Knot Complements
3
Is there some knot theory behind the Mobius donut?
5
Showing that gluing two knot exteriors together contains subgroups isomorphic with the knot groups.
3
Alexander polynomial of unknot without Fox calculus or infinite cyclic cover
0
Unlinking the toroidified Hopf link, overhand knot, in $\mathbb R^4$?
1
What singular link is this?
8
Wrapping a Rubber Band around a Cube