Definition of the preimage orientation

Guillemin and Pollack give quite confusing (at least for me) definition of the preimage orientation (see below).

I don't understand the part starting from the last display. Namely: 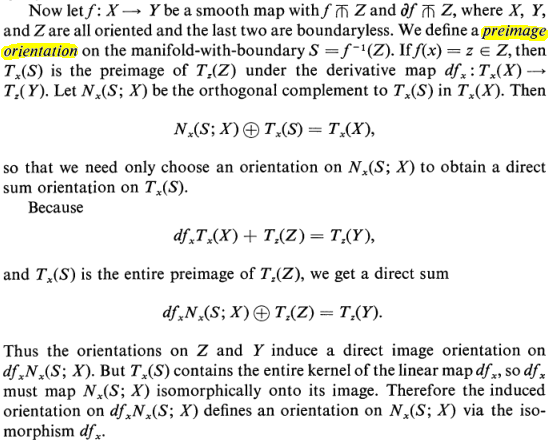 It's not important that $N_x(S;X)$ is orthogonal to $T_xS$. It's only important that they are in direct sum. But you may find it useful for the sake of visualization/concreteness.

Not the answer you're looking for? Browse other questions tagged manifolds differential-topology smooth-manifolds manifolds-with-boundary transversality or ask your own question.

2
Why orientation on $S^1$ is the one that counter-clockwise-pointing vectors are positive.
2
How to show $\dim T_x(X) = \dim df_x T_x(X).$
3
Calculate $\deg(f)$
2
Preimage orientation.
3
Proof the degree of a reflection through a hyperplane is −1.
5
Definition of pullback.
2
Guillemin-Pollack: "Moebius strip is not orientable"
2
$df_x$ maps $N(S.X)$ isomorphically