Conjecture: Every convex set of area $1$ is contained in a triangle of area $2$.

Conjecture. Every convex set of area $1$ is contained in a triangle of area $A = 2$.

It seems like this must be known are at least considered in the literature, but googling hasn't worked for me. Can anyone supply a proof of this or give me a reference?

Okay, after thinking about it last night I think I have a proof. Let $a(X)$ be the area of $X$.

Consider a counter-example to the conjecture, with convex set $M$ and minimum enclosing triangle $T$ such that $a(M) < 2 a(T)$. Without loss of generality, assume that one side of $T$ is contained in the $x$-axis of the plan with its center on $(0, 0)$. For every point $(x, y)$ in the plane, perform a shear transformation $x \mapsto x + k_1 y$ so that $T$ is isosceles, and then perform a horizontal stretch / compression $x \mapsto k_2 x$ so that $T$ is an equilateral triangle. Let $T$ and $M$ now refer to these new figures under these transformations. Since these transformations preserve relative area, take triangles to triangles, take convex sets to convex sets, and are invertable,we know that $T$ and $M$ must still be a counter-example to the conjecture.

So we now have a diagram that looks like this: 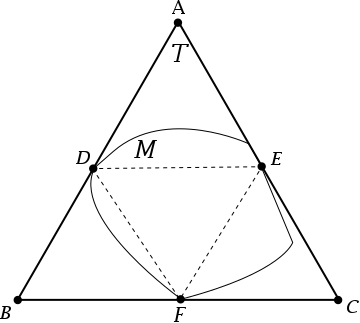 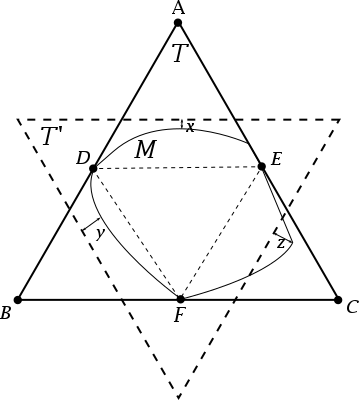 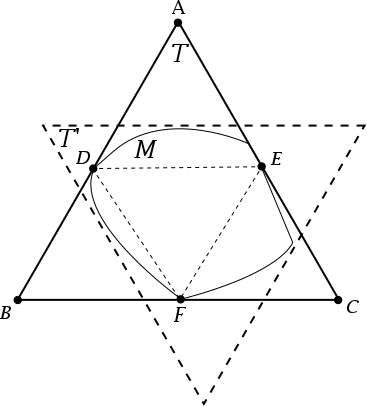 This contradicts the fact that $T$ was a minimum triangle (since we can now make $T'$ a bit smaller and still enclose $M$.

Now, one final worry you might have is that there is no absolute minimum enclosing triangle $T$ (perhaps because of an infinite sequence of triangles that get smaller and smaller). However, do not worry -- any convex set does have an absolute minimum triangle that contains it. Why? Well consider the function $F(\alpha, \beta, \gamma)$ that takes in three angles on the range $[0, 2 \pi]$. For angle $\alpha$, we take a line perpendicular to $\alpha$ and approach $M$ (from infinity) with this line until we hit $M$. If we do this with $\beta$ and $\gamma$, then we create a triangle. The output of $F(\alpha, \beta, \gamma)$ is the area of this triangle. While this function may take on infinite values, if we cut these sections out we get a continuous function on a compact domain and therefore must actually achieve it's minimum values.

Not the answer you're looking for? Browse other questions tagged area convex-geometry or ask your own question.

20
Maximum area of a square in a triangle
11
The image of every strictly non-expanding map between spheres is contained in an open hemisphere?
5
Polygon area method
0
Area bounded by square, circle, and line
1
Help indentifying unknown method of computing area by rolling a ball about the perimeter
2
How do dihedral angles grow with number of edges in Euclidean polyhedra?
1
Which area is more fundamental: parallelogram or triangle?
6
Does every convex planar set contain a centrally symmetric subset with at least $2/3$ its area?