The goal is to move the pieces so as to gather them all in the same square - in the minimal number of moves. Chess pieces can move as normal. Additionally, whenever the king and one or more knights are placed in the same square, the player may choose to move the king and one of the knights together from that point on, as a single knight, up to the final gathering point. Moving the knight together with the king counts as a single move.

Given the following setup, what is the minimum number of moves to gather all the pieces together? Provide the path as well as the answer. 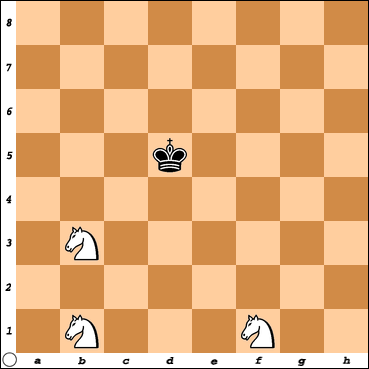 Source: USACO training pages - I cannot figure out why my answer appears to be wrong and the site provides no reason for its answer. This is one of 20 cases.

It's possible in five moves: 1. Kc4, 2. Kb3 (combining with the knight), and then all three knights move to d2 for a total of five moves.

Here's an argument that it's not possible in four: if there were a four-move solution, then the meeting square must be d2, because it's the only square that all three knights can reach in less than four moves total.

If we only have four moves to get all four pieces to d2, then we can't waste a single step: every single move must either be a piece reaching d2, or a knight combining with a king. But examining the position of the king, this is impossible: no knight can reach the king in a single move, nor can the king reach any knight or d2 in one move. So four moves is impossible, and five is the best we can do.

6
Knights and knaves: Who are B and C? (task 26 from "What Is the Name of This Book?")
29
Six Frogs - Puzzle (order reversal using special transpositions)
12
How can one determine the chess configuration that maximizes the number of possible moves?
91
The Right Triangle Game
0
Three knights on a 3x3 chess board
0
chessboard problems
1
Formula for merging numbers and minimum grid
4
A game-theoretic chess puzzle -- Proof verification
2
Thesis on finding "god's number" for puzzle game Lunar Lockout (renamed to Lunar Landing)