Do we have a conformal mapping from the regular pentagon to the disk?

I don't really know how else to state it. We have a solid uniformization theorem for the disk.

Separately, if we know the shape at hand, we could get an explicit conformal mapping from a polygon to the disk. This jump is suspicious, but let's use it:

These are taken from Stein (Complex Analysis) Vol II, Chapter 8 on Conformal Mappings. He leaves the special cases to you... 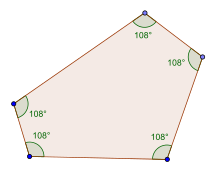 Such $108^\circ$ angles are constructible, for example. I'm also a little bit nervous that we are able to move $A$ around so much. What is going on there?

If I understand correctly, you want to start with a regular pentagon, which all sides have equal length and you want to find an explicit map which sends it to the circle. In general, the Riemann mapping theorem is non constructive and that is quite difficult to do, but as you are aware, Schwarz-Christoffel gives you a way to map the upper half-plane conformally to a given polygon. Now how would one come up with a positioning of the values of $A$ such that the image is a regular pentagon.

Here's an argument that you can find in a paper called Toy Teichmüller space of real dimension $2$ by Chen, Chernov, Flores, Fortier Bourque, Lee, Yang:

First, we need to label the vertices of our pentagon from $1$ to $5$. Using a Möbius transformation, you can send your vertice $1,2,3,4,5$ to $(x_1,x_2,\infty,-1,0)$ You know that a regular pentagon has $5$ symmetries which permutes the other vertices. Let $\sigma_i = ((i+1)(i-1))((i+2)(i-2))$ be the permutation of the vertices. For example $\sigma_1 = (25)(34).$ What you want to do is understanding the set of fixed points of the anticonformal map which gives you this permutation on the real axis. Note that since any anticonformal involution of $\overline{H}\cup \{\infty\}$ is either an inversion in a circle centered on the real axis or a reflection through a vertical line. Therefore, you can look at the set of fixed points of the anticonformal involution which fixes $0$, permutes $x_1$ and $1$ and also permutes $x_2$ and $\infty$.