I'm having fun reading the "Königsberg bridge problem" and the Euler story.

I read that if we make the assumption that for every node of the graph starts 2 paths, a rough estimate for the number of possible walks in the graph would be $2^{7}$, since 7 is the number of bridges. But i dont understand why.

I think that it can be proved using a tree, but i dont know how do it. What im asking if how practically derive the rought estimate of $2^{7}$ using a tree. Can you help me ?

Step 1: Make each land max a vertex (blue circle in the image below)
Step 2: Make each bridge an edge (black lines connecting the blue circles) 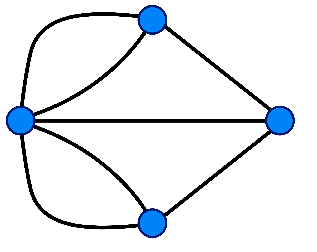 You can see there's 7 edges.
Each of these edges (bridges) can only be used once, so let's label them 1 if used in the walk and 0 if not used.

Now if you care about the order in which these bridges are used, then the string: 1111100 (where the 0's are only for the bridges at the extreme left) can be achieved in many different ways, depending on which vertex you start on and which order you take the bridges in order to use these 5 bridges. This might be why the comment says that the number of walks is larger then $2^7$.

However you are partially correct in that $2^7$ gives you an upper bound on the total number of possible unique paths that can be used, where by "unique" I mean two walks involving the exact same set of bridges are counted as being the same (because that's what matters for the 7 bridges of Konigsberg problem anyway).

You have probably found out already that the path: 1111111 is impossible under the rules of the problem. So in fact $2^7$ is just an upper bound on the number of assignments to the bridges as "used" and "not used".

I have therefore told you the only way that the $2^7$ can arise, but I've also explained why it is not the actual number of "walks" that can be made, since you can get 1111100 in more than one different way.

Not the answer you're looking for? Browse other questions tagged graph-theory computational-complexity or ask your own question.

5
Separator of a Planar Graph
21
Bombing of Königsberg problem
2
internal nodes in a complete binary tree
0
How to write a summation function that counts the number of nodes in a tree?
3
Number of rooted subtrees with m edges of a p-regular tree
1
Graph Theory Mini Proof Check (Leaves)
0
(Clarification) A graph with an even number of vertices has two vertices with an even number of common neighbors
2
How to derive the number of spanning tree in this graph
0
How can I complete this proof, a part of proof of the Tree are not clear for me in this induction.