Bayes Theorem Example in Nate Silver's The Signal and the Noise

In his book The Signal and the Noise, Nate Silver presents this example application of Bayes's Theorem on pp. 247-248:

Consider a somber example: the September 11 attacks. Most of us would have assigned almost no probability to terrorists crashing planes into buildings in Manhattan when we woke up that morning. But we recognized that a terror attack was an obvious possibility once the first plane hit the World Trade Center. And we had no doubt we were being attacked once the second tower was hit. Bayes's theorem can replicate this result.

You can view the complete example in Amazon.com's previw, and I've made the two pages available here.

Silver assumes the prior probability of a terrorist plane attack to be 1 in 20,000. After the first plane crash, using Bayes's Theorem he updates that to 38%. And after the second plane crash, he comes up with a 99.99% probability. However, I think he may be mistaken. I'll provide the details below.

To be precise, let us define the following three events:

Furthermore, Silver assumes $P(APC) = P(PC|\overline{TPA})$ (which is true if $APC$ and $TPA$ are independent events).

The idea behind Bayes's theorem, however, is not that we update our probability estimates just once. Instead, we do so continuously as new evidence presents itself to us. Thus our posterior probability of a terror attack after the first plane hit, 38 percent, becomes our prior probability before the second one did. And if you go through the calculation again, to reflect the second plane hitting the World Trade Center, the probability that we were under attack becomes a near-certainty -- 99.99 percent.

"Cool!" I thought, until I thought a bit more. The problem is that you can apply the same logic to calculate the conditional probability of an accidental crash, too. I'll spare you the math, but I come up with $P(APC|PC) = 0.615$ after the first crash, and $P(APC|PC) = 99.997\%$ after the second.

So we can be almost certain the second plane crash is a terrorist attack, and we can be even more certain that it's accidental?

Question 1: Am I correct that Nate Silver is doing it wrong?

Question 2: Am I doing it right?

So we can be almost certain the second plane crash is a terrorist attack, and we can be even more certain that it's accidental?

Correct, there is no contradiction here.

The same reasoning with accidental crashes.

Question 1: Am I correct that Nate Silver is doing it wrong? Question 2: Am I doing it right?

though the chance of two accidental plane crashes can multiplied to give you a very small number (1/12500 x 1/12500) since they are independent, one cannot assume the same for a terrorist attack. Once we think that the first plane crash is a TPA, it would not make sense to assume that the second crash, if it is also a TPA, to be independent and not highly correlated (perhaps 90% chance that the 2nd plane crash is TPA given the first is TPA) to the first. so if you use 1/20000 x 0.9 to get the probability that both plane crashes are TPA, you will not end up with the problem you mentioned that both scenarios have become more likely.

I think Nate did a bad job explaining his thinking. For me Bayes is confusing, so I try to make it very clear what my assumptions are to explain the probabilities.

I made a diagram: 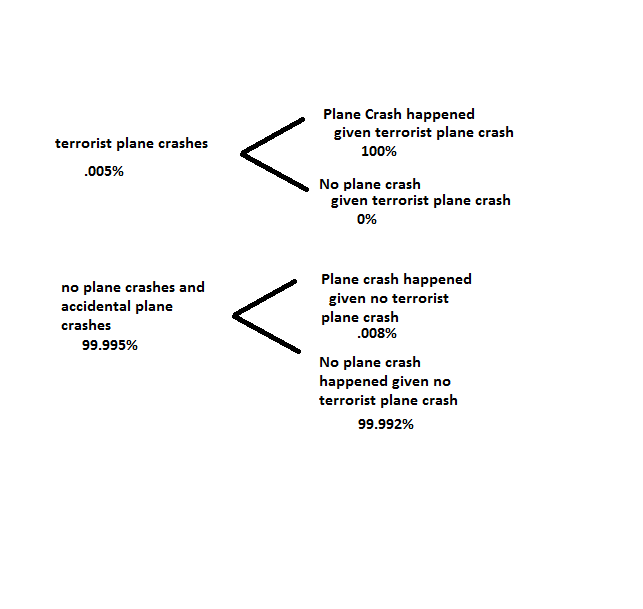 Using Bayes, you can establish what is the likely-hood there was a terrorist attack in Manahattan via plane crash given that a plane crashed, using your plane crash test.

You can run this model to get the updated value of an accidental plane crash AND normal days given a plane crash as you've done as well (61.5%). As you may have noticed, 100% - 38.5% = 61.5%. Essentially, this is the OPPOSITE of Nate's assumption, and the number isn't going up, its going down from 99.995%. This model is agnostic to whether the plane crash was a terrorist attack or an accident, as some of the above answers are confused about. This model already takes into the account the likely-hood of accidents and terrorist attacks with its plane crash test.

Not the answer you're looking for? Browse other questions tagged probability bayesian or ask your own question.