What's a proof that the angles of a triangle add up to 180°?

Back in grade school, I had a solution involving "folding the triangle" into a rectangle half the area, and seeing that all the angles met at a point: 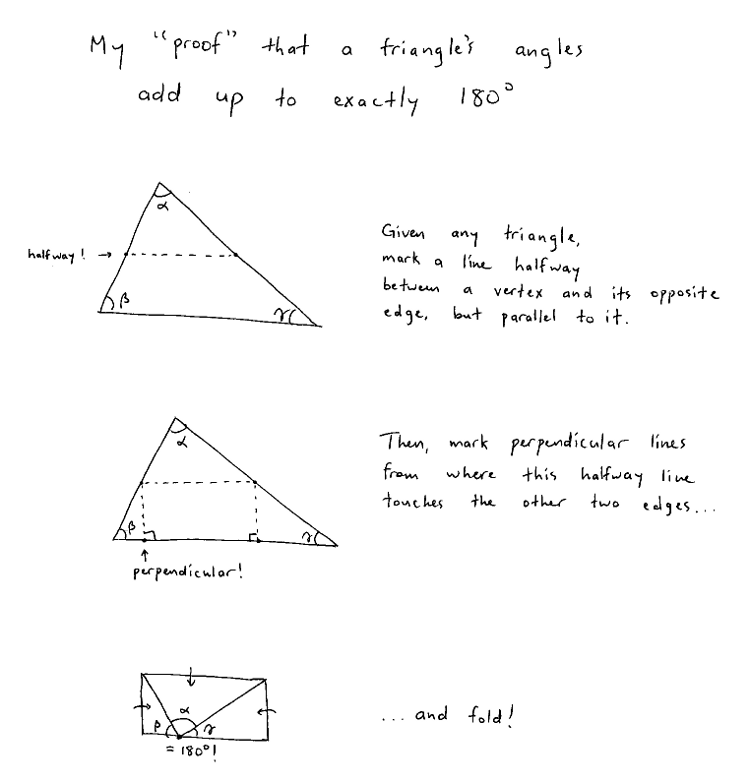 However, now that I'm in university, I'm not convinced that this proof is the best one (although it's still my favourite non-rigorous demonstration). Is there a proof in, say, linear algebra, that the sum of the angles of a triangle is 180 degrees? Or any other Euclidean proofs that I'm not aware of?

According to the Gauss-Bonnet theorem, if $T$ is your triangle, $\gamma_i$ its sides and $v_i$ its vertices, $$\int_T K+\sum_i\int_{\gamma_i}\kappa + \sum_i\alpha_i=2\pi\chi(T)$$ with $K$ the Gaussian curvature, $\kappa$ the geodesic curvature along the sides, $\alpha_i$ the external angle at the vertex $v_i$ (measured in radians), and $\chi(T)$ the Euler characteristic of $T$. Since the plane is flat, $K\equiv 0$; since the sides of the triangle are geodesics, $\kappa\equiv0$; and since $T$ is contractible, $\chi(T)=1$. Therefore the above formula tells us that $$\sum_i\alpha_i=2\pi.$$ Since the internal angle at the $i$th vertex is $\pi-\alpha_i$, this tells us that the sum of the internal angles is $\pi$, which is what we wanted

There is always the "taxicab" proof. Start at a vertex and take a cab trip around the triangle. The cab will have turned through an angle of $360^{\text{o}}$ Extend the sides of the triangle appropriately and you will get three $180^{\text{o}}$ angles with the vertex angles being supplementary to the turns taken by the cab. Then note that $540-360=180$ ...

I know this isn't a direct answer, but it is my favourite demonstration.

This demonstration adopts the point of view that Euclidean geometry is the study of the affine group in the plane (generated by reflections in $\mathbb{R}^2$). This group includes all translations and rotations. They preserve distances and angles. The role of this group, and in particular how parallel translation of vectors interacts with rotation, is prominent in the argument.

Everything hinges on $A_1'$ coinciding with $C'$, as suggested in this figure. Although this is visually "obvious," there is something to be shown, because $A_1'$ is the result of rotating $ABC$ while $C'$ is the result of translating $ABC$. Among the many ways to make this demonstration, then, here is one that is geometric in spirit.

You always have the "original" proof found in Elementa. I like this one. It is direct and easy to follow, making only use of addition of angles and properties of parallell lines. It does resemble your proof, but replaces "folding" of the triangle by the construction of a line parallell to one of the sides.

There's nothing wrong with your "folding" proof. Fold = reflect. To formalize it, drop a perpendicular from the top vertex to the base. Call that point $P$. Then reflect the top vertex across the top horizontal side of the rectangle, and reflect each of the bottom vertices across the corresponding vertical side of the rectangle. Note that all 3 reflections coincide at $P$. End of proof.

An exercise: This result isn't true in hyperbolic or spherical geometry. Where does this proof use an axiom specific to Euclidean geometry?

Look at your triangle so that one side is horizontal. Duplicate it and slide the copy horizontally until the two triangles touch only at a single point. Make another copy of the original triangle and rotate it 180 degrees and slot it in the gap between the first two triangles.

What you wind up with is a trapezoid where the three angles adjacent to each other, additively giving a 180 degree angle.

It seems that since the whole thing is done with three congruent triangles, it should be easy to argue from elements.

It's a (trivial) calculation.

The sum of the three angles at vertices $A$, $B$, and $C$ is obtained merely by rearranging the product of three numbers in the denominator of a fraction:

Both sums, $-\pi$ and $\pi$, are possible: in the former case, the triangle $ABC$ is traversed in the negative direction (with its interior to the right) while in the latter it is traversed positively.

Assuming that the sum of all angles of polygon does add up to a particular constant depending on the no. of sides of the polygon.

Let us assume that the constant is 'k', if at the end of the proof we are able to find a value k for an arbitrary triangle, we can assume that k exists for all the triangles.

Now we all know that the triangle can be divided into 3 portions by lines joining each vertex and any point inside the triangle , (example centroid). let us name it Point P.

let The angle subtended by each side on the Point P be cen.A, cen.B, cen.C. Thus,

Also the line joining the vertex and the Point P. of triangle will divide each angle in two parts, name each as

thus for each of the smaller triangles we have following equations -

But by initial assumption and hence by (1) we have

I think this simple proof should suffice.

Or rather just cut the triangle any which way you want keeping the vertices intact. Arrange them with their pointed ends together, voila, you can see the angles must add up to 180deg.

Also why go for complicated proofs when we have simple ones. I guess, because we are Mathematecians! :)

If we have a Triangle with vertices A,B,C

As we can see in the Triangle, if a man starts from Vertices A and goes in the direction of the line extended from Vertices A, suddenly decides to go towards Vertices B, Meaning he has to turn in Anti-Clockwise Direction for Angle(PI - A). now he walks to Vertices B, then suddenly he wants to go towards C and turns in Anti Clockwise Direction for Angle(PI - B) and moves along C, finally he does the same and turn towards A with a Rotation of Angle(PI - C), So completes One Revolution or 2*PI Radians, or the sum of all the Three Rotations the man took to complete one Perimeter walk on the Triangle Walk or an equivalent of Angle(3*PI -(A+B+C)).

Assumptions Taken to Calculate This result :

I think i can safely assume these and get to the result.

66
Nuking the Mosquito — ridiculously complicated ways to achieve very simple results
63
Interesting "real life" applications of serious theorems
19
Proofs from the "Ugly Book"
3
Sum of Angles in a Triangle.
5
Coordinate proof that the sum of a triangle's angles is $180^\circ$?

10
Proof that the angle sum of a triangle is always greater than 180 degrees in elliptic geometry
4
Proof of "triangles are similar iff corresponding angles are equal"
10
Proof of Alternate, Corresponding and Co-interior Angles
2
Is this a valid proof that the sum of the angles in a triangle is $180^\circ$?
1
Can the interior angles of any triangle in Minkowski spacetime sum to anything other than 180 degrees?
0
Determining the Sides of a Triangle, Given are Perimeter and three Angles
0
Proving triangle sum theorem and parallel lines and corresponding angles
36
A way to directly see that the interior angles of triangle sum to $180^\circ$?
0
Prove that, for any polygon, taking all pair of adjacent angles, subtracting 180 from their sum, and adding all the results together equals $180(n-4)$