Calculating the area with simple and double integrals

I have an exam on calculus next week and I'm confused with the usage of simple and double integrals. As far as I know, if you want to calculate the area under the curve of a function $f(x)$ between $a$ and $b$, you have to calculate an integral between those two points: $$\int_{a}^{b}f(x)dx$$ 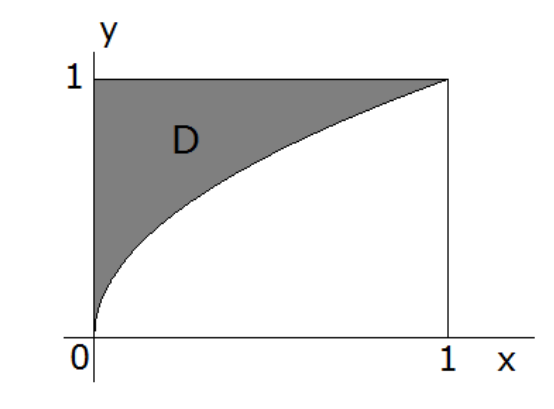 In relation to that, if I just simply calculate $\iint_{D}dxdy$, how will it make a difference? Will I calculate the whole area of D?

And my last question has to do with the formula (1). As I previously said, sometimes my teacher uses double integrals to calculate the area between two functions. Then, don't I need to use formula (1)? Are they perhaps equivalent? For example, given the domain:

In order to calculate its area, she would split the problem into double integrals, one for $y-x^{2}-1=0$ and another one for $y-2x^{3}=0$, and find the points where they intersect: 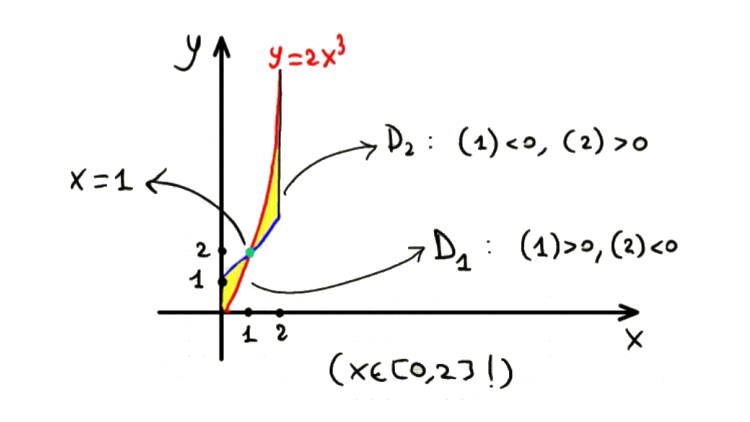 Thank you so much in advance.

By a double integral in the form

we are evaluating the (signed) volume between the function $z=f(x,y)$ and the x-y plane.

Then by the following double integral

we are evaluating the volume of a cilinder with base the domain $D$ and height $1$ which correspond (numerically) to the area of the domain $D$.

For the last question, yes the integral is additive thus we can divide it as

and we can also use (1) splitting the integral accordingly.

The way I like to think about it is in terms of "dimensional analysis". In the double integral, you're integrating $1$ across the domain of $D$, so it gives you the area of $D$. In essence, that $dx dy$ bit tells you that you are integrating two dimensions, kinda like multiplying two dimensions. So it gives you an area. Similarly, you have the height $(1-\sqrt{x})$ for a given infinitesimal length $dx$. When multiplied and added together, you get an area, because a length times a width is an area.

Another way I like to think about it is by thinking about putting little spaghetti strands for $dx$ or $dy$. If you do it the "double-integral" way, you're standing up spaghetti strands of size $1$ on each tiny $dxdy$ square. The resulting volume is the area of $D$ times 1 "spaghetti height". For the single integral, you lay down spaghetti of length $(1- \sqrt{x_0})$ at $x = x_0$, doing that in each part of $D$. The resulting area is the area of $D$.

Not the answer you're looking for? Browse other questions tagged calculus area or ask your own question.