How to cut fried eggs with mathematical elegance and perfection

Suppose you have fried $N$ eggs and your entire, perfectly circular pan is filled with egg white and $N$ perfectly circular, non-overlapping egg yolks of equal size. How would you cut the egg white using only a finite amount of straight lines so that each of your $N$ egg sandwiches will have exactly one yolk and the same amount (area) of egg white? It is allowed to let the lines pass trough the yolk, but you do not actually cut it; the yolk circles have to remain intact (until you pop them and let the delicious yolk flow over your sandwich).

EDIT: (From a discussion in the comments) The yolks do not actually have to stay connected to the egg white, you can picture the yolks as holes in the white. When the white has been distributed well, the yolks can then be added to each sandwich.

EDIT 2: For the sake of clarity, I'd like to add that in my original train of thought, line segments and half lines are also allowed as cuts, not just lines. Just like you would be able to cut in real life. But the line-only case could be interesting, too! Bonus points if you manage to solve it that way :)

For $N=2$, I have found out that taking the midpoint $M$ between the centres of the two yolks and cutting along the line that passes trough the centre $C$ of the pan and M cuts the white evenly almost always, although in some cases you have to "jump over" the yolks while cutting, but this is okay (see image below). The only exception is $C=M$, but in that case just cut along the perpendicular of the line between the midpoints of the yolks! This is a (rather simple) case-by-case construction and I was wondering if there is a construction that just works as it is, without having to consider cases. I'm looking for a case-free solution (construction) to the general problem, too. Any construction for other specific cases are welcome too!

I'm having trouble formulating what tools are exactly "allowed" for the construction, so right now I'd say: anything goes, as long as it's nothing trivial like "take the line that cuts surface A precisely in half" without specifying how to construct that line. I hope this example gives you an idea of what I'm looking for, or at least what I'm not looking for. On the other hand, anything interesting that can be said regarding this (kind of) problem, perhaps form a more abstract and deep mathematical point of view, is also very appreciated! For instance, I would find it interesting to see an answer which does use these kind of "trivial" lines like I described above, although it will not answer my question!

An example of the "jump over" case as described above: 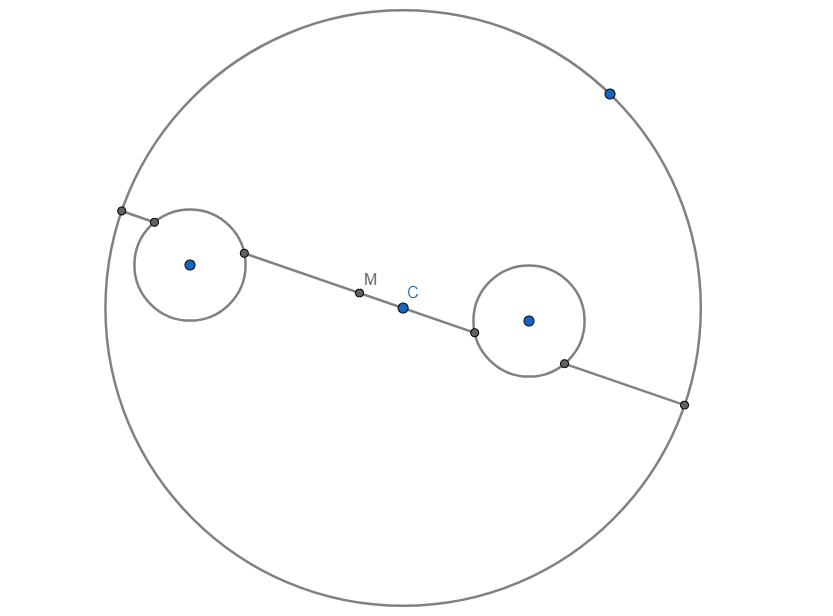 I think the Ham-Sandwich theorem can help in this case , which states that for every positive integer n , given n measurable "objects" in n-dimensional Euclidean space, it is possible to divide all of them in half (with respect to their measure, i.e. volume) with a single (n − 1)-dimensional hyperplane.

So even if you increase the number of eggs you can always find a line that cuts them exactly in half.

Numberphile did a great video on the subject ,Ham Sandwich Problem - Numberphile,i suggest you check it out

1
hyperbolic geometry (and circle ) construction problem
29
How does one cut onions in a mathematically efficient way?
0
How can we cut a 3D Cube using 3D Cube?
7
How do you find the center of a cake with just a knife?