What are some mathematical topics that involve adding and multiplying pictures?

Let me give you an example of what I mean. Flag algebras are a tool used in extremal graph theory which involve writing inequalities that look like:

(It's not too important to my question what this inequality means, but let me give you some context. Informally, the things we're adding and multiplying are probabilities that a random group of vertices in a large graph will induce some specific small subgraph. To make some manipulations rigorously justified, this is not precisely what we mean; instead, they are the limits of such probabilities over a convergent sequence of graphs.)

Aside from being potentially useful in solving math problems I'm curious about, I enjoy using, thinking about, and even looking at statements about flag algebras, because these equations and inequalities just look so cool! Instead of multiplying, adding, and comparing letters and numbers, we get to do the same thing to pictures of things.

So my question is: what are some other topics in mathematics where we get to do the same thing?

Obviously, you can always give any name you like to a variable, like those math problems you see on facebook where cherry plus banana is equal to three times hamburger. I'm not interested in examples like this, because there's nothing special about those variable names. Instead I'm interested in cases satisfying the following conditions:

It's okay if it's not adding or multiplying specifically we're doing, as long as we're manipulating the pictures in ways traditionally reserved for numbers or variables. For example, the things represented by pictures could be elements of some algebraic object (group, ring, etc.)

Noah Snyder's research statement which can be found online has a really cool example of this: 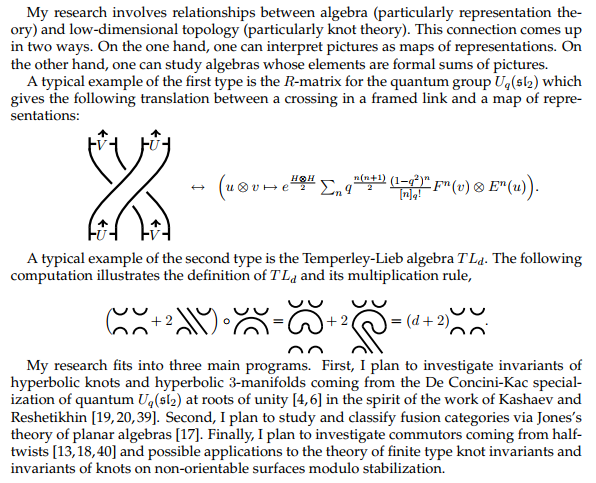 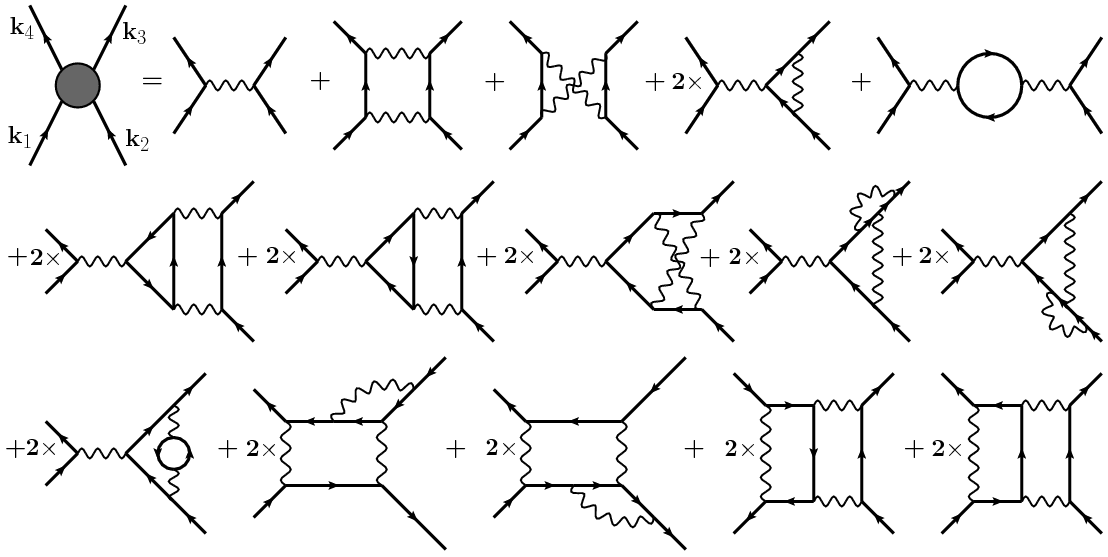 In the area of combinatorics, especially generating functions, it can be natural to use pictures. I think the following satisfy the conditions in the question: they are helpful, and mathematicians have actually used them in books.

The first book is Concrete Mathematics, by Graham, Knuth, and Patashnik. In the book they introduce generating functions using domino tilings. What are all the ways to tile a $2 \times N$ board using dominoes? First they write down an expression for the set $\mathsf{T}$ of all tilings:

We can solve the above equation to get an expression for $\mathsf{T}$:

We can also collect terms, by treating the variables as commutative:

Later they work with tiling $3 \times N$ shapes with dominoes, and get more complicated equations:

And by making the (pictorial) variables commutative again, we can bring to bear all the algebra we know: 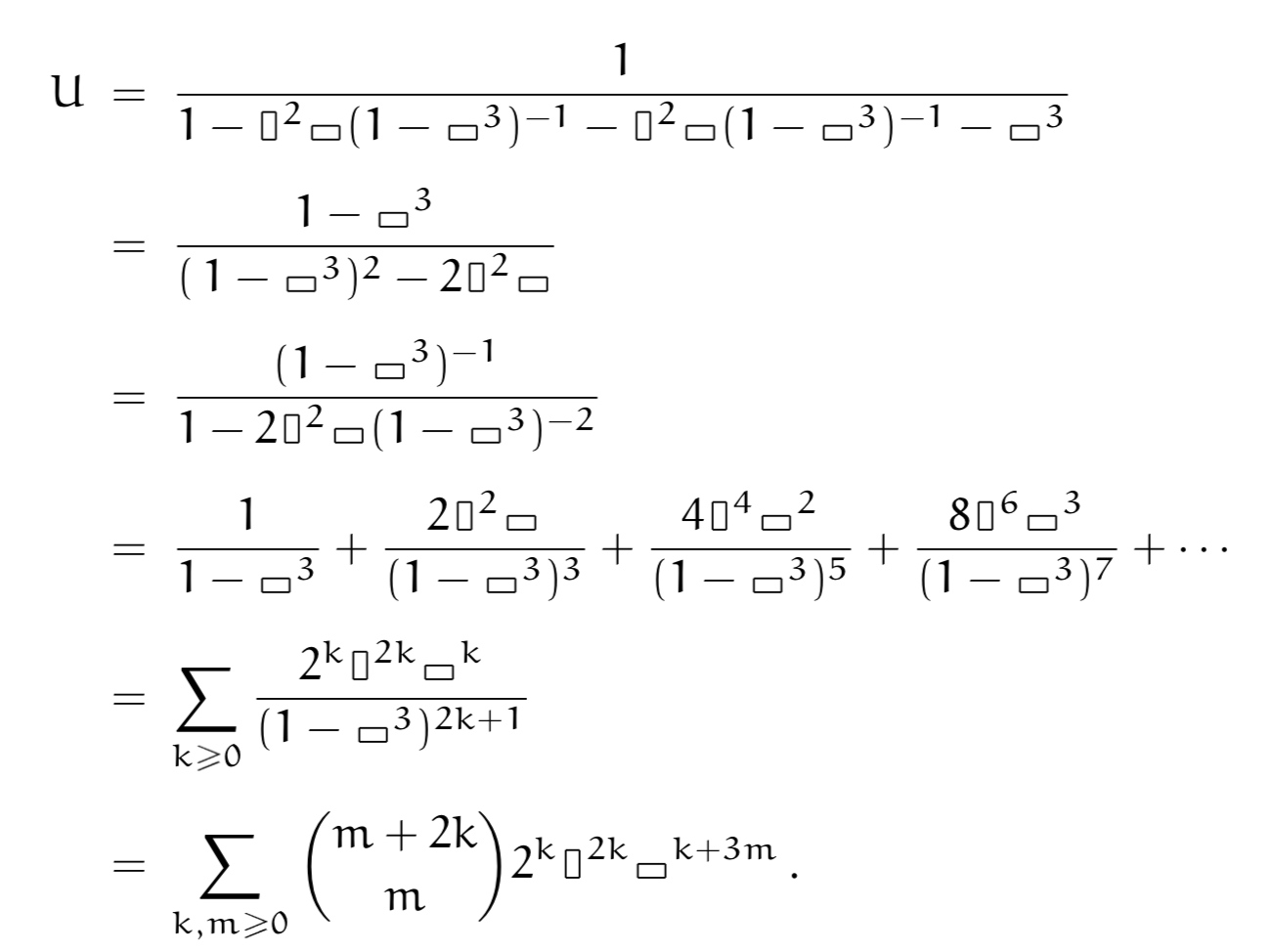 Later in the book they do something similar for the coin-change problem (ways of making change for a dollar using pennies, nickels, dimes, etc).

Another delightful book is Analytic Combinatorics, by Flajolet and Sedgewick. I seem to remember similar pictures in the introductory pages of the book for trees and other structures, but it appears my memory is faulty. Anyway, there are a couple of examples in the book: 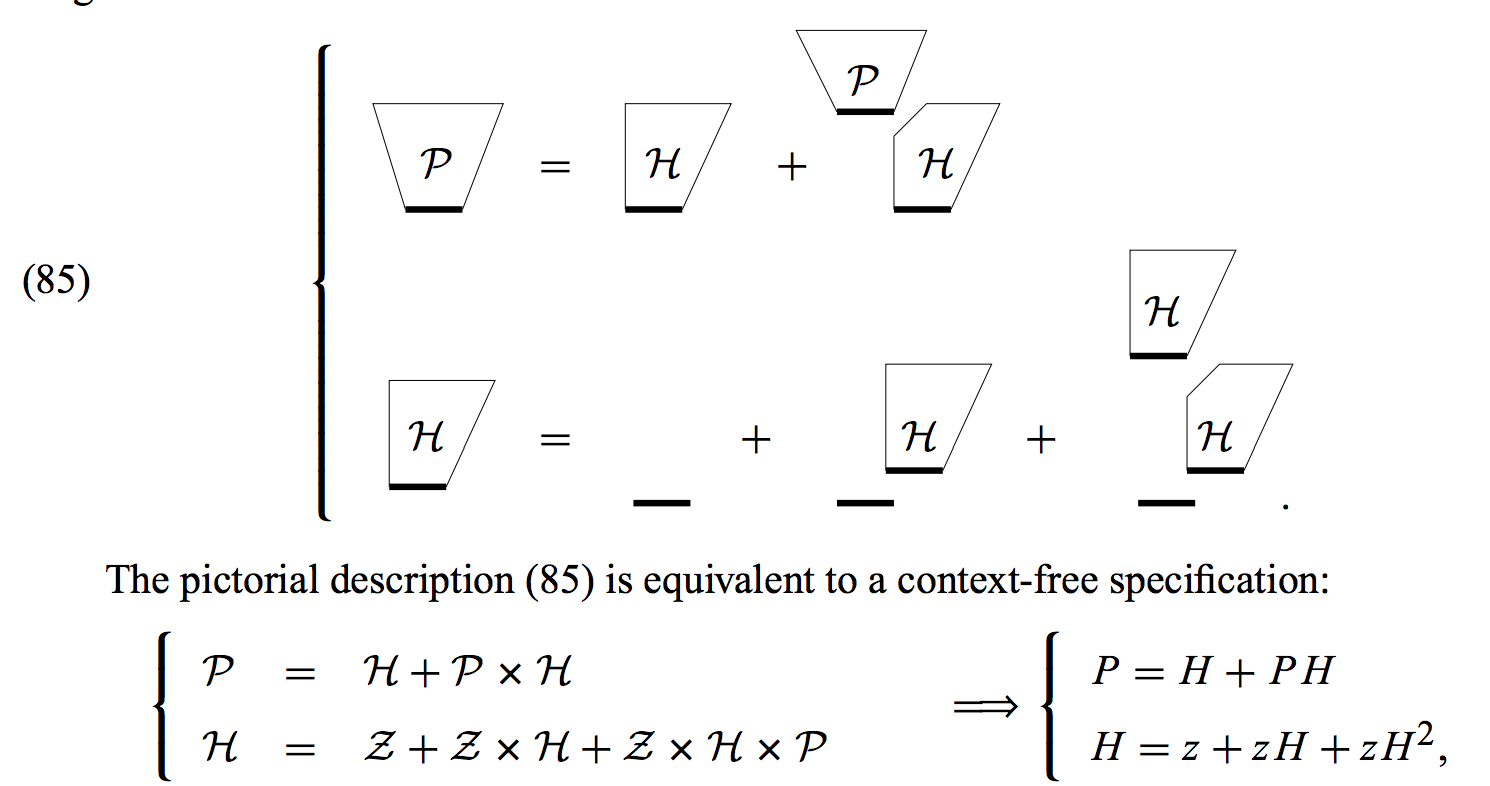 Diagrammatic algebras create a ring where each element is a picture (or a linear combination of pictures), and multiplication is done by concatenating diagrams and using some rules to simplify them. A famous example is the Temperley-Lieb algebra.

Some things that come to mind:

Rook polynomials are used to solve certain combinatorics problems. They're polynomials, so it's fairly common to add and multiply them when doing computations, and they're often most easily represented by an image of a chessboard.

Diagrammatic algebras have already been mentioned, but let me give another example of these that is of tremendous importance in current research:

Given a Coxeter system $(W,S)$ (i.e. a group generated by the elements of $S$ where all elements of $S$ are involutions and the only allowed relations are given by specifying the orders of products of two of these involutions), one can associate a category whose objects are finite sequences of elements of $S$ and where the spaces of morphisms are linear combinations of diagrams modulo certain relations.

The precise description of the diagrams and their relations is complicated and better done using plenty of pictures, so I leave that to the paper by Elias and Williamson https://arxiv.org/abs/1309.0865, which is well worth a read despite the length.

The general features of these diagrams is not too complicated to describe though: First of all, we always work up to isotopy. Then the diagrams are graphs embedded in the vertical strip $\mathbb{R}\times [0,1]$ in such a way that the edges are coloured by the elements of $S$. Edges are allowed to terminate at the bottom or top (i.e. at $\mathbb{R}\times \{0\}$ or $\mathbb{R}\times\{1\}$) and such a diagram corresponds to a morphism from the sequence $(s_1,\dots, s_k)$ to $(s_1',\dots, s_m')$ if these sequence are the colours of the edges terminating at respectively the bottom and top when read from left to right (so the diagram goes from the bottom to the top in a sense).

Further, the way one adds and multiplies these diagrams is very nice: The addition is just "formal" seeing as we were already taking linear combinations. The multiplication is not actually one thing but two: We can multiply diagrams either horizontally or vertically.

If we keep the sequences from above, then the vertical multiplication is only defined when $(s_1',\dots,s_m') = (t_1,\dots,t_n)$ (i.e. the edges at the top of one diagram are the same as those at the bottom of the other).
In this case, we can multiply the diagrams by putting one on top of the other, which makes sense since the edges match up.

Finally, I will remark a bit on the importance of these diagrams. The paper linked above by Elias and Williamson forms the foundation for a later paper by the same authors, published in Annals, in which they prove Soergel's conjectures (which as a consequence gave the first purely algebraic proof of the KL conjecture).

The diagrammatic description allows one to actually do calculations, and this is part of what enables Williamson to disprove Lusztig's conjecture in https://arxiv.org/abs/1309.5055 (published in JAMS).

Finally, modifying some details in the setup of the diagrams, one gets another category which turns out to govern the characters of tilting modules for algebraic groups in positive characteristic, as shown in the papers https://arxiv.org/abs/1512.08296 and https://arxiv.org/abs/1706.00183. These characters, in turn, give the characters of all simple modules as long as the prime is not too small, and in this way, one gets a replacement for Lusztig' conjecture (so these diagrams are both responsible for disproving the conjecture and for providing a replacement). 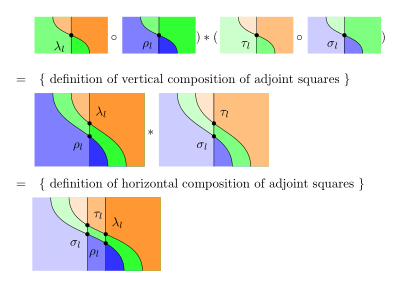 The pictures are taken from Category Theory Using String Diagrams which also provides a nice introduction to the technique.

You should be interested in the notion of Planar Algebra, introduced in 1999 by the Fields medalist Vaughan Jones. A neat course by Vijay Kodiyalam is available on YouTube, see here (HD).

In engineering and physics, diagrams are common wherever multiple processes interact in a topologically non-trivial way. For example, feedback systems are often described by a block diagram like this: 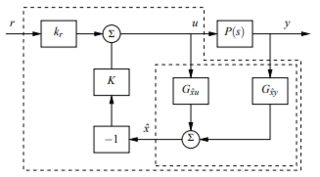 There is a sort of algebra you can do using such a block diagram that lets you compute the behavior of the system (by way of a Laplace transform) from the behavior of the individual components. A relatively simple block diagram can encode an extremely complicated dynamical system. For example, Henrick Bode (one of the pioneers of feedback system theory) remarked that he once worked out what order of differential equation described a particular feedback system he was working with, and it turned out to be 55--not an equation you'd want to solve directly.

One can define on the set of planar convex polygons: 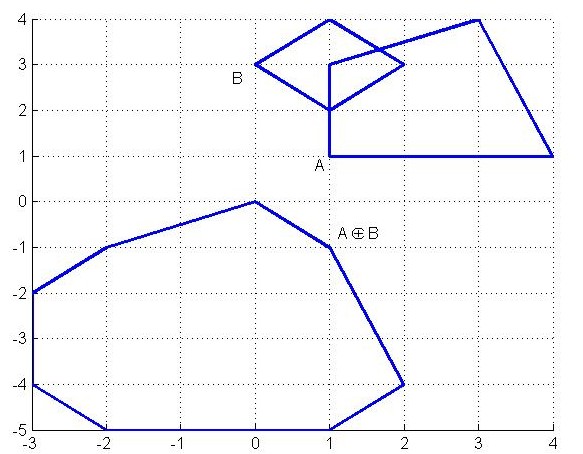 One of the interesting aspects of Minkowski addition is that it amounts to the blending (or convolution) operation illustrated in Fig. 2. 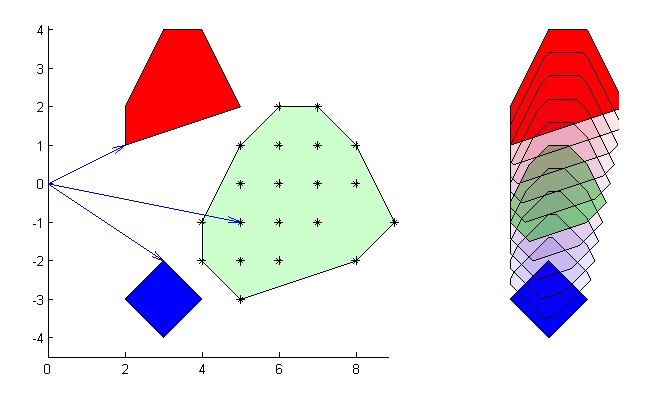 Outside of algebra you also have manipulation of diagrams (trees in this case: labeled or unlabeled, and sometimes with multiple sets of nodes) in mathematics/numeric analysis of e.g. Runge-Kutta methods, where the trees represent Taylor-series/derivatives of the function.

I don't know if the manipulations are sufficient to meet your requirements, but at least it is different from many of other examples.

As a random reference see slide 7 of: http://people.cs.vt.edu/~ptranq/Trees_And_Order_Conditions.pdf

There is the theory of regularity structures invented by Martin Hairer which uses tree-like symbols to keep track of the regularity of the involved objects. Have a look at this paper, the graphical notation appers first on page 23.

In case it has not already been mentioned, there is commutative diagrams and diagram chasing in category theory.

Not the answer you're looking for? Browse other questions tagged abstract-algebra soft-question notation or ask your own question.

6
Are there broad or powerful theorems of rings that do not involve the familiar numerical operations (+) and (*) in some fundamental way?
5
All possible total orderings of a finite set are isomorphic. What are some other examples of this phenomenon?
1
Some results about Group Rings/Algebras
101
What are good "math habits" that have improved your mathematical practice?
16
What are some theorems made easier by Stone Duality?
3
What interpretations of matrices are there and how do they connect?
1
Prove that $\mathbb{C}$ is a finite $\mathbb{R}$-algebra and that $\mathbb{Q}, \mathbb{R}, \mathbb{C}$ are not finite $\mathbb{Z}$-algebras