What is the probability that the center of the circle is contained within a triangle formed by choosing three random points on the circumference? [closed]

Please provide additional context, which ideally explains why the question is relevant to you and our community. Some forms of context include: background and motivation, relevant definitions, source, possible strategies, your current progress, why the question is interesting or important, etc.

Consider the triangle formed by randomly distributing three points on a circle. What is the probability of the center of the circle be contained within the triangle?

Wherever the first point is chosen, the diameter on which it lies (the diameter being determined by the circle center and the first chosen point) divides the circle into two symmetric semi-circles, so the second and third points (assuming they are distinct) must necessarily be place on opposite halves of the circle.

where we multiply the integral by $2$ to cover the fact that we can interchange the second and third point.

The probability is $\frac14$. The argument given in this answer to the corresponding question for $n$-gons applies equally well to circles. This answer to the generalization of this question to arbitrary dimensions may also be of interest: the probability that the convex hull of $n+2$ points in $S^n$ (the unit sphere in $\Bbb R^{n+1}$) contains the origin is $2^{−n−1}$.

Assume two points are drawn at random. First called A, second called B. Connect the points with the center, we get two lines and four quarters (area is not the same). Only in one quarter that the triangle formed will contain the center.

Apply the symmetry, the points A, B are totally random, thus the area of quarter is totally random. The events the third point fall into any quarter are symmetry.

Thus the probability is 1/4. This is very intuitive explanation. 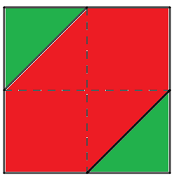 Take any triangle that contains the centre. Connect each vertex with the centre and continue the lines until they cross the circle. Now form the three 'outer' triangles, as shown in Figure 1.

These sets of 4 triangles are uniquely determined by any one of them, meaning that you can reconstruct all of them if you have any one. 1 of the 4 always contains the centre and 3 of them don't. In other words, the triangles that do not contain the centre are three times as much as those that contain it.

Therefore, the probability sought must be $\frac14$. 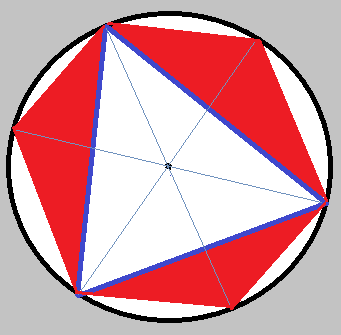 What was not considered in this approach are the special cases when the centre lies on one of the sides of the triangle initially picked to contain the centre. Then there are 2 uniquely determined triangles both of which contain the centre. It would make sense that these cases are so negligibly few that they don't affect the overall probability. I could possibly be missing other cases as well.

Any feedback is welcome. 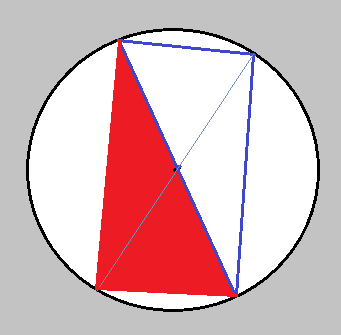 Take a circle with circumference $2$, and place the first point arbitrarily. Then the second point which will fall a distance $a$ away from that first point, where $a$ is somewhere between $0$ and $1$, with equal probability.

Then in order for the triangle to contain the centre of the circle, the third point must fall in a section of the circumference of length $a$ - which happens with probability $a/2$ - opposite the first two points, as illustrated:

Note that the third point has to be on the other side of the diameter from the first point than the second point - so at least half the circle is always excluded.

Thus the probability can be evaluated as:

Okay so not a math whiz or anything, so don't expect an elegant answer, but I did this question earlier today because I saw it online, and this is basically what I got:

You're placing 3 points (A, B and C) randomly around the circumference of a circle. What's the probability that a triangle drawn between those points will contain the center of the circle within its area?

The answer I got was 1/4. Here's why. (I have written a summed up version at the bottom for people who don't like reading my boring writing, which is everyone).

Point B can also be placed anywhere, though there's a bit more here. If we divide down from point A into two even semi-circles, we can see that the probability of point B falling on either half must be 1/2. However, because A will always be at the top, you can afford to disregard one whole half of the circle as candidates for point B. In my drawn diagram I chose to place point B on the anti-clockwise half of point A. What I mean by that is even if point B does fall on the clockwise side of point A (It's randomly distributed after all, all points are possible.), then I could just flip the circle, effectively moving the point to the opposite side of the circle, without altering the relative distances between any of the points (A, B or the center itself). To put it simply, we can assume that Point B will fall on the anti-clockwise side of the circle.

But can we gather more information about where B will fall? Well, not for any individual instance. But for the probability we can take averages. I don't know how many of you use dice, but when you work out the average of a dice you add the maximum and minimum values then divide by two (or add all values and divide by number of values. It's the same as how you work out regular averages). In this case the lowest possible value of point B is 0, in that it falls in the exact same place as point A, there are 0 degrees of separation.

(By the way, I measure distances here in 'degrees of separation', which is basically just the angle formed by lines from the two points meeting in the center of the circle. I do this because there are no set distances, so angles and ratios are the only constants in this scenario.)

The most separation possible is 180 degrees. There's a completely even chance that point B could fall on or between any value between 0 and 180, which means the average value, if you selected 1000 different point B's at random, would be (0 + 180)/2 = 180/2 = 90. So we can say that on average there will be about 90 degrees of separation between points A and B. Obviously, the majority of cases will not actually have exactly 90 degrees of separation, but for every case with more separation, there will (statistically speaking) be a case with equally less separation, so in the end it averages out to 90.

My next step was to draw lines from point A (at the top) and point B (at 90 degrees anticlockwise of point A) through the center of the circle and to the opposite side of the circle. The result is the circle divided into four quarters vertically and horizontally. For the triangle to contain the center of the circle, point C must fall within the opposite quarter to the one between Points A and B. In other words, Point C must fall on or within the points which are directly opposite points A and B, in order to contain the center of the circle within the area of triangle ABC. For a while I pondered the placing of point B, because the farther from point A point B is placed, the more likely point C will be within the desired area, but as before, for every more likely scenario, there's an equally likely scenario which is as equally unlikely for point C to fall within the desired area. What this boils down to is that we can assume Point B is at its average, because that will ultimately give us the average probability.

Therefore, for every point that point C could create a 'correct' solution there are 3 that do not.

There is a 1/4 chance that point C will fall in place to create a triangle which contains the center of the circle.

If I were to try to sum everything up simply, I would say; - Point A can be chosen arbitrarily, because no matter where it falls there's an equally likely chance of the other points falling in a 'correct' position.

Sorry for the painful read, but frankly I don't really have the mathematical vocabulary to simplify this all down into a compact equation.

Here's a rigorous solution that doesn't require calculus or reasoning about distributions.

Let's pick the first point $A_0$ at random, then pick two diameters $B$ and $C$ (instead of two points) at random, and then pick which endpoint of each diameter at random by flipping a coin for each. That gives the same distribution as picking three points at random.

Not the answer you're looking for? Browse other questions tagged probability circles geometric-probability or ask your own question.