Update: I felt that in my original answer, the intuition got lost in all of the formalism, so I've rewritten it to make it clearer. The core idea is still much the same as Qiaochu's answer on the linked MO question.

First off, I don't think you're going to get an explanation for $\nabla\cdot (\nabla\times \mathbf F) = 0$ that's on quite the same level as your sliding block example, because while the gravitational force is well-known to be the gradient of the negative potential, there aren't any tangible vector fields that are the curl of something. The curl, like the cross product, is a little "unnatural" as it depends on the choice of handedness; classical physics, on the other hand, is independent of handedness, so you can never observe a curl directly, only hidden under an integral or cross product to make the handedness goes away.

Nevertheless, the most mathematically natural argument that $\nabla\cdot (\nabla\times \mathbf F) = 0$ is quite easy to grasp. For a warm-up, let's look at another explanation for why $\nabla\times (\nabla f) = 0$. The curl of any vector field $\mathbf F$ describes how much $\mathbf F$ "spins around", right? So take any closed loop in space; the net curl inside the loop is nothing but how much $\mathbf F$ "circulates" around the loop, i.e. $\oint \mathbf F \cdot d\mathbf x$. But if $\mathbf F$ is a gradient of something, say $f$, then $\mathbf F \cdot d\mathbf x$ is actually how much $f$ is going up or down as you walk along $d\mathbf x$. So if you walk along a closed loop and come back to where you started, the net change in $f$ has to be zero! Or as wzzx's comment states: you can't walk from home to school and back and have gone uphill both ways.

Now we can do the same thing for $\nabla\cdot(\nabla\times \mathbf F)$. Intuitively, the divergence of a vector field $\mathbf G$ measures how much $\mathbf G$ is "spreading out" or "pulling in". In other words, pick any region of space; what does the total divergence of $\mathbf G$ inside it tell you? It tells you exactly how much $\mathbf G$ is flowing out of the surface of the region, i.e. $\oint \mathbf G \cdot d\mathbf A$. But if $\mathbf G$ is the curl of another vector field $\mathbf F$, then $\int \mathbf G \cdot d\mathbf A$ on a surface just measures how much $\mathbf F$ circulates around the boundary of that surface. What's the boundary of a closed surface? Imagine taking a portion of the entire surface and growing it to cover the whole. Its boundary eventually gets smaller and smaller, and then disappears. So there is nothing for $\mathbf F$ to circulate around, and the circulation must be zero.

All I've shown here is that the integrals of $\nabla\times(\nabla f)$ and $\nabla\cdot(\nabla\times\mathbf F)$ are zero on any arbitrary region, but that should be enough to see that (at least for smooth $f$ and $\mathbf F$) their values must be zero everywhere.

"Formal intuition" is a bit of a contradiction, but look at

Replacing $\mathbf{A}$ with $\nabla$ would give the identity, but I'm not sure if this counts as intuitive. Note: This isn't supposed to be a proof. It's only supposed to suggest the identity.

Here, I'll use Gauss's theorem and Stoke's theorem, which themselves have intuitive explanations.

We are looking at $\nabla \cdot (\nabla \times \mathbf{F})$. Ignoring the stuff inside the parentheses, we're looking at a divergence of something. Let's call that thing $\mathbf{C}$ since it's a curl. 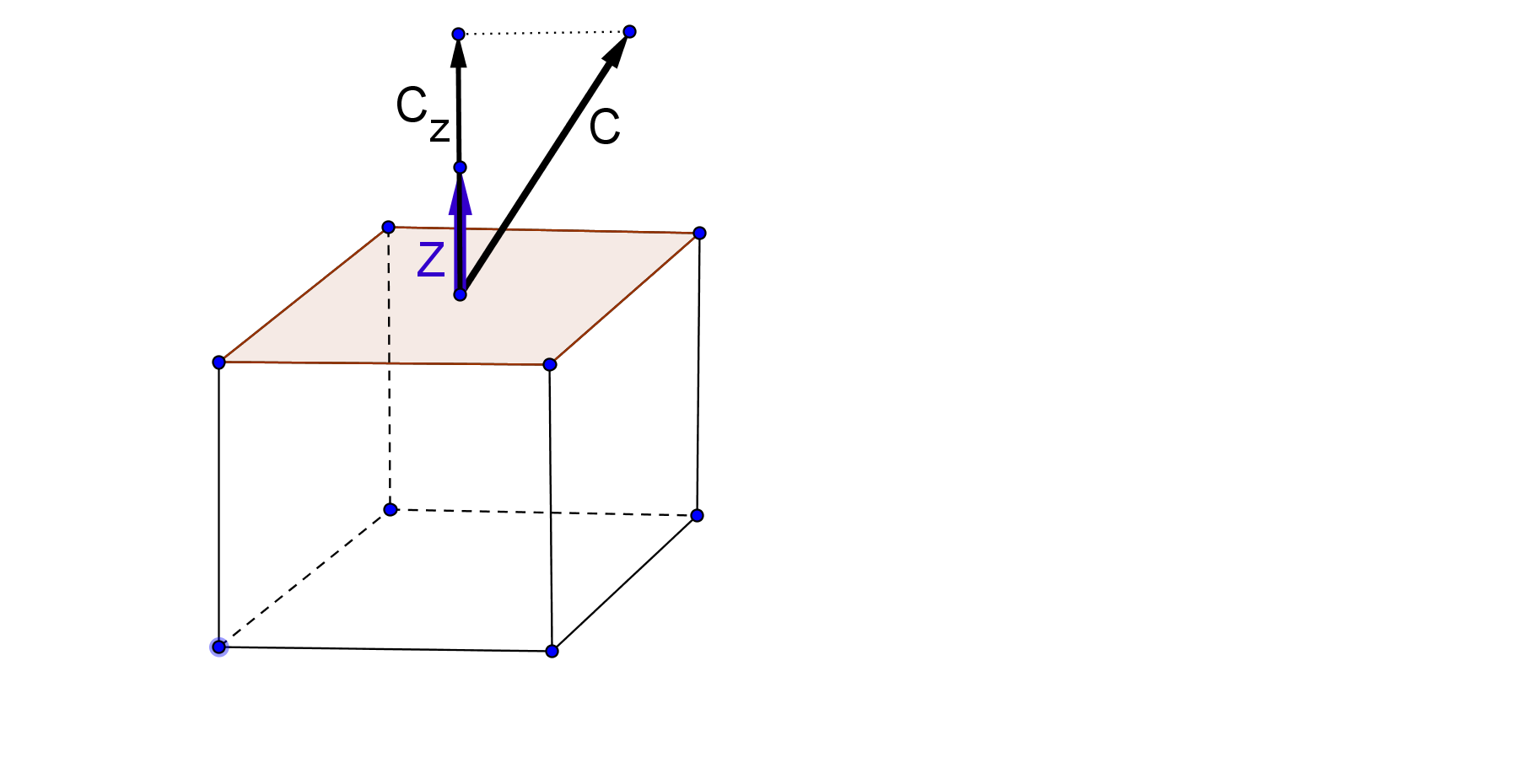 If we can show that all six such vectors (one for each face) contribute zero net flux when combined, we know that the average divergence over our box is zero. How do we get information about the average of $\mathbf{C}$, projected onto a normal vector, over some face? 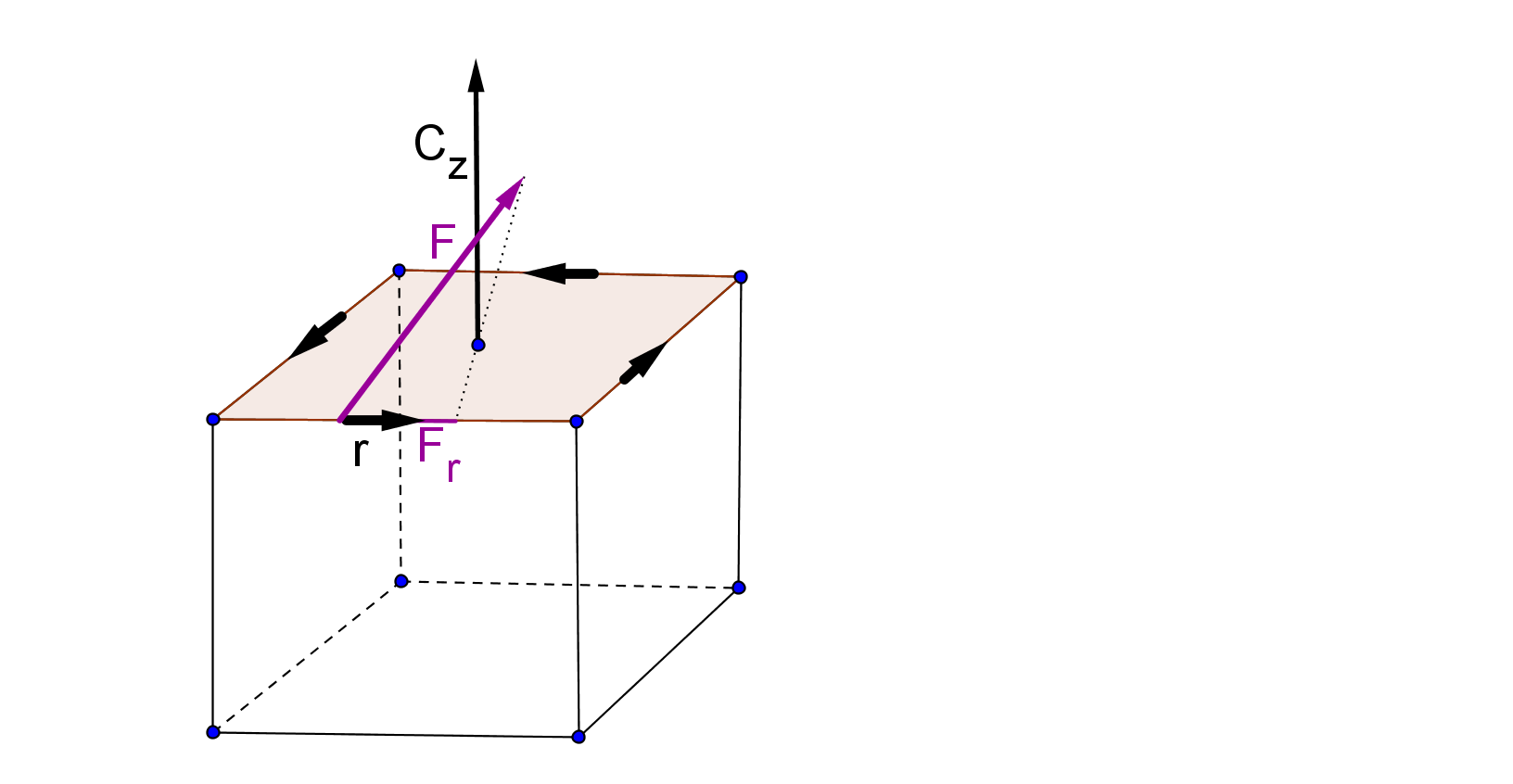 The important thing to note is that this $4.2$ value of the line integral along the edge gets used twice in finding the flux because the edge borders on two different faces. For the top face, going left-to-right on our edge means circling clockwise as viewed from above. The right-hand rule tells us that the positive $4.2$ of the line integral along our edge contributes positively to a vector $\mathbf{C_z}$ point out of the top. Since it points up out of the top, it contributes negative flux. All told, traversing our edge, thinking of it as part of the top of the cube, contributes $-4.2$ to the total flux. 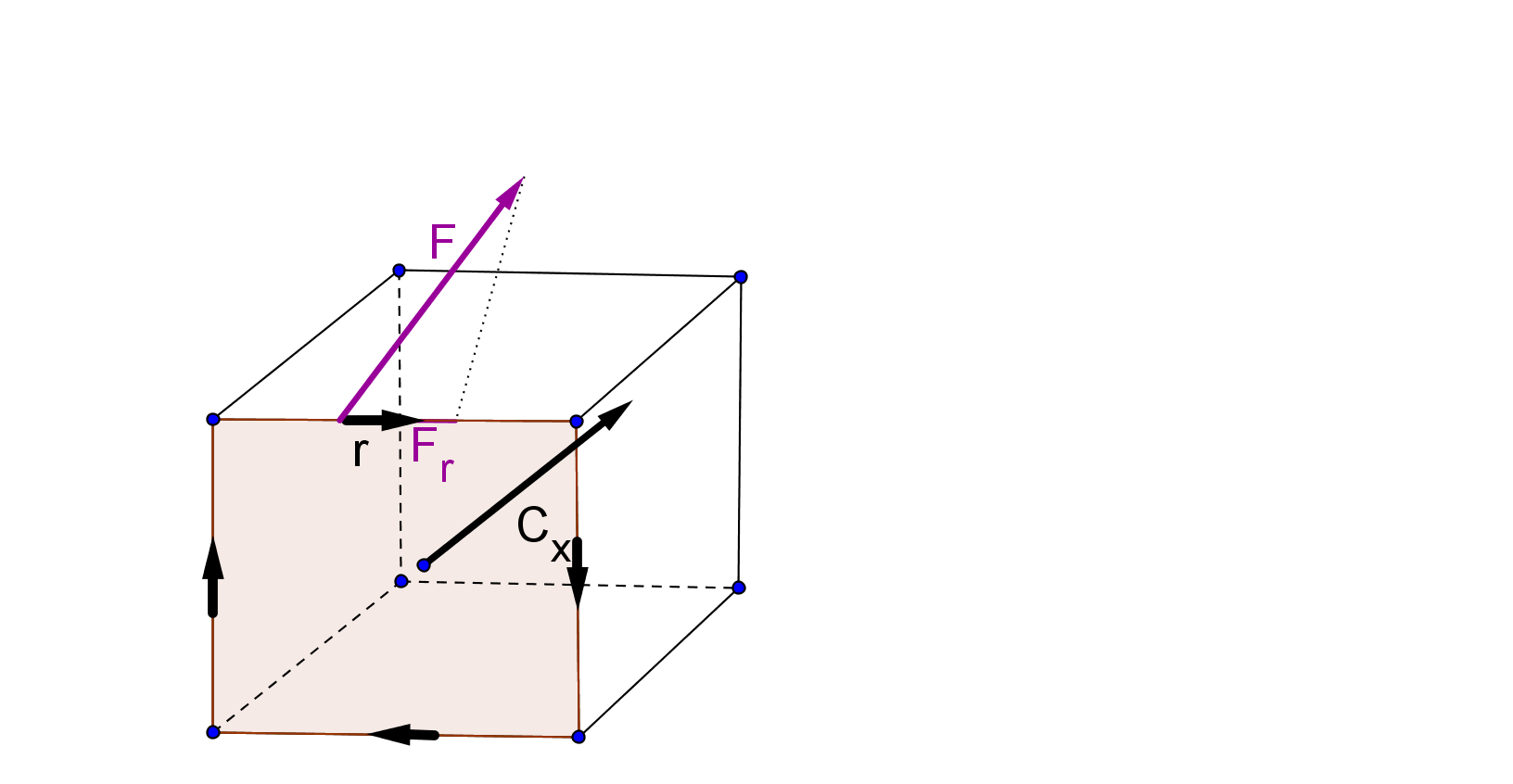 The edge's two contributions to the flux cancel each other because one point outwards and the other points inwards. There is nothing special about this edge, so all edges will be canceled by their two contributions to the flux. The total flux for this cube is zero. That means the average of the divergence over the cube is zero. There was nothing special about this cube, so the average divergence over any cube is zero, and the divergence itself must simply be zero everywhere.

This theorem about the divergence of the curl is responsible for the conservation of charge. Begin with Maxwell's equation for the curl of the magnetic field

Take the divergence of both sides.

Now use Maxwell's equation for the divergence of the electric field

Insert this into the above to get

We expect that electric charge will be conserved. That means the the flux of charge current coming out of some region must be compensated by a loss of charge density there.

Plugging this into our previous expression gives

This means that if electromagnetic fields obey Maxwell's equations and if electric charge is conserved, then the divergence of the curl of any magnetic field must be zero. However, I'm not sure how intuitive this is, and also the magnetic field cannot be chosen arbitrarily because it must be divergenceless.

We could repeat the procedure for Maxwell's equation for the curl of the electric field. There, we'd get

Here's an explanation I was given while I was still in high school (but not in school, of course!). I didn't fully understand it at the time, but it might be illuminating if you're willing to accept the generalised Stokes theorem. Essentially, it's the claim that $$\int_{M} d\omega = \int_{\partial M} \omega$$ where $\omega$ is a differential $(n - 1)$-form, $d\omega$ is its exterior derivative, $M$ is an $n$-dimensional smooth manifold with boundary, and $\partial M$ its boundary. (There are some technical conditions which I'm glossing over.) I should probably explain what these things are though:

The generalised Stokes theorem is a vast generalisation of the fundamental theorem of calculus, the Kelvin—Stokes theorem, and the divergence theorem. Indeed, they are all special cases: again, working in 3-dimensional Euclidean space, we get

Of course, exactly as with div, grad, and curl, just by fiddling with the definitions, you can show that for any differential $n$-form $\omega$, the exterior derivative of the exterior derivative is $d^2 \omega = 0$. But this doesn't explain why it should happen, and I think the best explanation is through the generalised Stokes theorem: $$\int_M d^2 \omega = \int_{\partial M} d\omega = \int_{\partial^2 M} \omega$$ This shows that the fact that $d^2 \omega = 0$ is intimately linked to the fact that $\partial^2 M = \emptyset$, i.e. that the boundary of a smooth manifold itself doesn't have a boundary. Translating this to the classical notation, we immediately have the identities $$\nabla \times (\nabla f) = 0$$ $$\nabla \cdot (\nabla \times F) = 0$$ as promised.

Think of the surface of water, and a two dimensional vector field $\mathbf{F}(x,y)$ which gives its velocity everywhere. Think that you put a needle that floats somewhere on its surface. If the needle is rotating, then it is in a region of non-zer curl, and if the needle (EDIT: a bunch of them) appears to be translating inwards or outwards towards or away from some point, then it is a region of non zero divergence. Finite divergence just means there's like a hose pipe somewhere which is sucking in or spewing out fluid radially. This is how you can think of the divergence and the curl individually.

For your question, think of a mixed region with non zero divergence and non-zero curl. The direction of the curl would be along the axis of rotation and hence perpendicular to the surface.

Or intuitively, the curl is perpendicular to the divergence, which is an abuse of notation because divergence is really an operator, so this is as far as the analogy goes.

Of course, this is a highly non-technical explanation.

I apologize first if my explanation below had been proposed before because there are so many answers that I have no time to check every comment. I also wish to thank my student in my Electromagnetic Theory class, Yung-Chi Chien, for helpful discussions this year.

To show that div curf F = 0, the simplest way is to expand curl F and then div curl in the Cartesian coordinate system. Changing the order of partial differentiation will cancel out all of the expanded terms.

curl grad phi can be proved similarly, and many people have pointed out clear interpretations.

8
Intuitive explanation of div(curlF)=0
-2
Is $\nabla \cdot (\nabla\times \textbf{F})$ = div $\textbf{F} $?
0
Geometric interpreation of triple product ∇ · (∇ × a)
5
Can I use divergence theorem right after using Stokes' theorem?
2
Div and Curl Identities
0
Is the Divergence of Curl equal to Zero for All Coordinate Systems?

3
Is there a lower dimensional vector operator analogous to Curl or Div?
26
Can the curl operator be generalized to non-3D?
13
How would one arrive at the formulas for divergence and curl?
3
Why is $\operatorname{Div}\big(\operatorname{Curl} F\big) = 0$? Intuition?
6
Integration by parts of $\varphi \cdot \operatorname{curl}(u)$
2
I had to evaluate the surface intregral $\int\int_s \operatorname{curl}\vec{F} \cdot \hat{n}\ dS $
26
Intuitive, possibly graphical explanation of why rationals have zero Lebesgue measure