This is an exercise that appears on differential calculus exams at my university. I'm typing up a thorough response to this exercise here to share with my class, and maybe it'll help other students too.

First, let's recall what the Intermediate Value Theorem says. Informally, this theorem just says that if you have a function $f$ that is continuous on some interval $[a,b]$, every possible output value between $f(a)$ and $f(b)$ must get hit by $f$ for some input in that interval. A special case of this is when $f(a)$ and $f(b)$ have different sign (one is negative and the other is positive), then the graph of $f$ must cross the $x$-axis between $a$ and $b$ (so $f$ has a zero between $a$ and $b$). 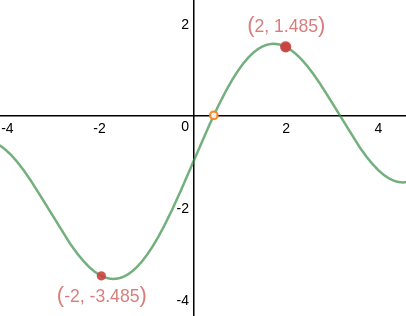 As an example, for the continuous function with the above graph (green), since the value of the function at $2$ and at $-2$ (red) have different sign, the function must have a zero (yellow) on the interval $(-2,2)$. Now it's may be very difficult to calculate the actual value of that zero, but the strength of the Intermediate Value Theorem is that it allows us to say a zero exists without ever calculating it. 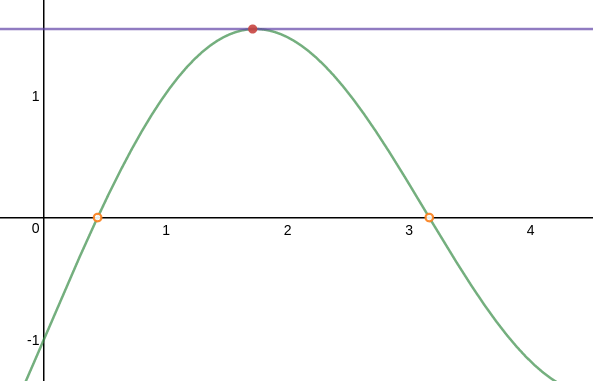 For example, look at function with it's graph (green) above. The function is continuous and differentiable on the interval between its two zeros (yellow). So by Rolle's Theorem, there must be an point on the graph (red) such that the slope of the tangent line at that point (violet) is the same as the slope of the line through the two (yellow) endpoints of the interval, which is zero.

Now this is a lot to parse and condense into a response. After understanding everything above, here's how I would write it down if this question were asked on an exam:

Not the answer you're looking for? Browse other questions tagged calculus real-analysis roots rolles-theorem or ask your own question.