Is the area of intersection of convex polygons always convex? 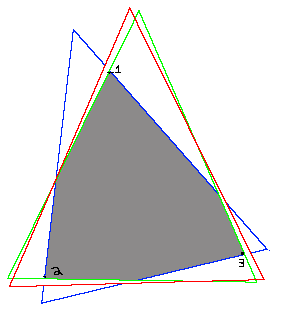 Sigur and Michael already responded to the part of your question regarding the intersections of convex sets being convex so I'm going to skip that.

The second part of your question is then about inscribing triangles in convex polygons. If you're looking to maximize area, then all three vertices of the triangle can be assumed to be vertices of your polygon. In other words: there exists a triangle maximizing area whose vertices are all polygon vertices.

Why? The method below is certainly not the most direct method to do it, but I like arguments of this sort because they give you intuition about the structure of the problem. I am not being 100% rigorous but pretty close to it, you can fill in the details pretty easily.

Suppose your convex polygon is $P_1 P_2 \cdots P_n$ and $\triangle ABC$ is a triangle with maximal area. (At least one such exists, in view of $P_1 P_2 \cdots P_n$ being compact.) Clearly $A$, $B$, $C$ must all lie on the boundary of the polygon otherwise you can stretch them out and increase the area.

For starters, note that this forces $BC$ to be parallel to $P_1 P_2$. Indeed if it weren't, then the triangle height from $A$ onto $BC$ would increase monotonically if we were to translate $A$ towards either $P_1$ or $P_2$ (and decrease monotonically in the other direction). This contradicts the maximality of the area of $\triangle ABC$, because perturbing $A$ slightly would result in an inscribed triangle with larger area (same base, bigger height). Note that the perturbed triangle is stil inscribed in view of the polygon's assumed convexity (check this). Therefore $BC$ is parallel to $P_1 P_2$.

In this case we may gradually translate $A$ to coincide with your favorite point among the pair $P_1$, $P_2$ without altering the area of the triangle, since we're keeping the same base and the height does not change in view of $BC$ being parallel to $P_1 P_2$. Translating $A$ does not affect the triangle being inscribed since our polygon is convex (like above).

EDIT: Since we have come this far, we might as well describe an algorithm to actually find a triangle with maximal inscribed area. The method described above is not intended for that purpose since it's only good for finding local maxima (something that Rahul has also pointed out), but it does hint towards a more general approach.

Of course since we've shown that we can take maximal triangles to have polygon vertices, there is a silly $\Theta(n^3)$ algorithm that iterates over all possible such triangles and finds the one of maximal area. But we can do better: as Sigur pointed out we can maximize over all pairs $(L, h_L)$ where $L$ is a line connecting a pair of vertices and $h_L$ is an optimal height onto this line. You can do this by iterating over all $n^2$ pairs of vertices (to determine $L$) and then using binary search to determine the optimal $h_L$ in view of convexity, for a total runtime of $\Theta(n^2 \log n)$. You can actually kill the $\log n$ factor by using a careful amortization technique when iterating over the second vertex in $L$, solving the problem in $\Theta(n^2)$. My algorithm skills are not what they used to be, maybe there's an even faster way to do it. I'd be very happy to hear it.

Not the answer you're looking for? Browse other questions tagged geometry algebraic-geometry euclidean-geometry analytic-geometry or ask your own question.