I have read similar questions with regards to what the first fundamental form is. I couldn't find my answers due to them assuming extra knowledge and/or using a different book which presents the topics differently. I am studying differential geometry from Pressley (2nd ed.). Here is an excerpt from the book: 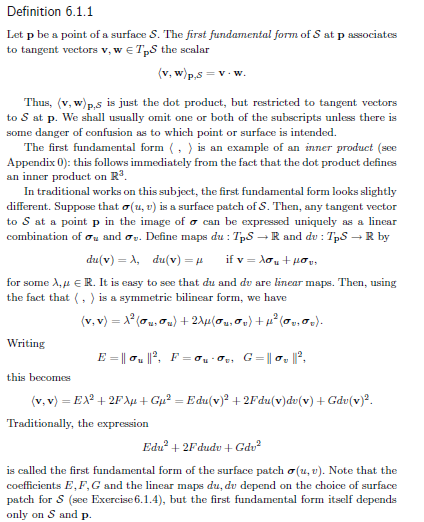 I understand the first fundamental form is a dot product. It takes two vectors from the tangent space and outputs a number. Now, what does this have to do with $du$ and $dv$? And why would they name it so it coincides with the notation from integration? According to the definition provided, $du$ is a function that outputs the first component of a vector in your tangent plane, and $dv$ outputs the second component. Then he takes the dot product of the two vectors and now the dot product is written in terms of the basis vectors $\pmb\sigma_u$ and $\pmb\sigma_v$.

Now we have the following:

(2) What was the purpose of inventing all this machinery? So you can calculate the arc length using only the vectors that span the tangent plane?

(3) Why is this property intrinsic? Someone living on the surface would calculate the length of the curve by looking at the curve and measuring the unit tangent vectors of the curve. But now it seems more complicated, that he somehow needs access to the surface patch parametrization ($\pmb\sigma$) in order to get $\pmb\sigma_u$ and $\pmb\sigma_v$

(4) Lastly, what is the connection between the $du$'s and integration? What is the relation between these two functions and the integrand we are used to seeing all the time. They are obviously functions, not infinitesimals.

(1) As you observed, the first fundamental form is nothing but the inner product in $\mathbb{R}^3$, restricted to the two dimensional tangent space. However, when we make the choice of a surface patch, we are then working in the space $\mathbb{R}^2$. In general, the tangent vectors in this space won't correspond in any simple manner to the tangent vectors of the original surface, rather the correspondence will depend upon at what point of the surface we're looking at the tangent vectors. That means in terms of the vectors in $\mathbb{R}^2$, the first fundamental form won't be a dot product, but something more complicated: it will be a symmetric bilinear form, and that's what exactly the formula describes. If you make a different choice of surface patch, you'd still like to compute the same fundamental form, but since you made a different choice of a surface patch, you'll have to adjust the values of $E$, $F$ and $G$ as to ensure you're computing the same function. I'd invite you to work out a simple example, say the unit sphere with two different surface patches.

(3) In fact, for someone living on the surface, surface patches are all they have: this definition ensures no matter what surface patch they pick, they measure the same length.

A linear form is a linear real function, i.e., a linear map whose range is $\mathbb{R}$.

Finally, you can now look differently at the $dt$: it is also a linear form on the vector space $\mathbb{R}$. In fact any function $f(t)$ defines a form $f(t)dt$ and can be integrated according to $\int f = \int f(t)dt$.

1,3) The notation $dx_j$ is ambiguous: what $dx_j$ is ultimately depends on what basis we choose to determine the coordinate $v_j$ of $v$. When you change basis, you change all the forms $dx_j$ AND all the functions $w_j$ that appear in the expression of $w$. In fact, the functions $w_j$ change exactly such that $w(x)(v)$ yields the same result whether you calculate it using the old basis or the new one. The same thing happens with the first fundamental form. Coordinates and basis change, the form does not.

2) What for? Given two tangent vectors $v$ and $w$, you can of course calculate $\langle v,w \rangle$ directly with $v\cdot w = \sum_j v_jw_j$ without using $E$, $F$ and $G$. Same for lengths of arcs. But I can think of at least two reasons why $E$, $F$ and $G$ are useful. The first is to connect the lengths of arcs drawn on a surface to the notion of area and later curvature; why these should be connected is not a trivial matter I believe. The second reason is that they allow to calculate dot products and lengths over flat maps without referring to 3D coordinates. For instance, pick up any map of the globe, draw two vectors emanating from the same point and try to calculate their dot product. You will find that reconstructing the 3D vectors is not convenient and using the functions $E$, $F$ and $G$ is much more straightforward.