The Koch snowflake has finite area, but infinite perimeter, right?

So if we make this snowflake have some thickness (like a cake or something), then it appears that you can fill it with paint like this ($\text{finite area} \times \text{thickness} =\text{finite volume}$), but on the other hand, you can't paint its sides ($\text{infinite perimeter}\times\text{thickness}=\text{infinite surface area}$)... Is there something I am getting wrong? Is there a clever trick to it, or am I just misunderstanding something?

My teacher (I'm in middle school) told me that this is some higher-level maths I won't understand now.

What you've found is a fundamental property (or perhaps it would be better to say lack of property) of arc length in two dimensions — or going up one dimension, surface area in three dimensions: it's not 'continuous' with respect to small changes in shape.

You don't even need a Koch snowflake or similar fractal curve to see this; give me any shape — for instance, a circle — and give me an arbitrarily small box that its boundary passes through, and I can give you a shape that looks exactly the same outside the box but that has arbitrarily large arc length. For an example of this, imagine starting with the curve $y=\sin^2(\pi x)$ between $x=0$ and $x=1$. Then the exact arc length of this curve is hard to compute, but we can put a lower bound on it: the curve goes from $y=0$ to $y=1$, then from $y=1$ to $y=0$ again, so it must have total length at least $2$. $(^*)$

As for what this has to do with 'painting' the snowflake, consider the thickness of the paint you're using to try and paint the sides of it. If you want your paint layer to have a finite thickness $\tau$, then we're not necessarily talking about the Koch snowflake itself, but just a curve that lies within a distance $\tau$ of it everywhere; since the paint 'hides' anything smaller than $\tau$, we can't tell the difference between the two anyway. But for any $\tau$ there are curves that stay within distance $\tau$ of the snowflake but have finite length! So we only need a finite amount of paint to do the painting here. And as your paint gets thinner and thinner, the length that you need to cover will increase — but that's all right, because your paint will spread farther and farther. In the limit, you're talking about 'painting' the infinite length of the snowflake itself — but now your paint layer is infinitely thin, so it shouldn't be too surprising that you can make it stretch as far as you need to. (This is very much analagous to taking a one-square-unit 'bucket' of 2d paint and noting that you can paint a $1$ unit $\times 1$ unit square with it, or a $2$ unit $\times 1/2$ unit rectangle, or a $1000$ unit $\times 0.001$ unit rectangle, or...)

Meanwhile, I can't do the same thing with area (or in the 3d case, volume); it's clear to see that any modifications that are made within a $d\times d$ box can only change the area of the figure (one way or the other) by at most $d^2$. $(^*)$ So if you tell me that you want to increase the area bounded by your shape by a thousand square units but only give me a $1/10\times 1/10$ unit box to do it in, I can fairly tell you that that's impossible.

Incidnetally, this same lack of continuity for arc length is at play in another very similar 'paradox': The staircase paradox, or why $\pi\ne4$ . The fundamental explanation is the same: the fact that two curves are arbitrarily close to each other along their entire spans tells you nothing about how close their arc lengths are.

$(^*)$ Note that I haven't given you proofs of these assertions! You should be skeptical here, because you've already seen that behavior doesn't necessarily match what you might expect where these things are concerned. Fortunately, these assertions are true, but proving them would require going pretty far afield.

You can see this paradox already with the "angel's bugle" obtained by rotating the curve $$y(x)={1\over x^{3/4}}\qquad(x\geq1)$$around the $x$-axis. The volume $$\pi \int_1^\infty y^2(x)\>dx$$ of this bugle is finite, whereas its surface area $$2\pi\int_1^\infty y(x)\sqrt{1+y'^2(x)}\>dx$$ is infinite. The latter would indicate that you need an infinite amount of gold to gild it on the inside, even though the volume is finite. The resolution of the apparent paradox is the following: In the term "gilding" we are conveying the impression that every surface element is plated with the same thickness, however small. But for the inside of an "angel's bugle" this is not possible since the cross-sectional diameter of the bugle converges to $0$ when $x\to\infty$.

When you "paint" the Koch snowflake with a line of nonzero width, you are effectively sampling the fractal at a resolution of the line width. By doing so, you do not obtain the length of the infinite fractal, but instead a fractal with finite iterations, therefore obtaining a finite length. 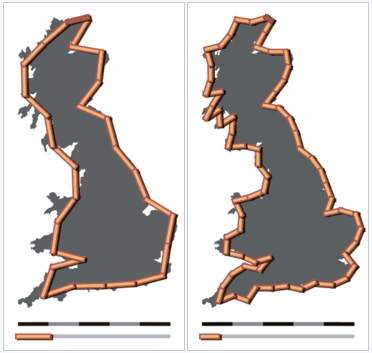 You can fill the finite extruded Koch snowflake 3-D volume with a finite amount of 3-D paint. But the Koch snowflake, while topologically a 1-D line, has Hausdorff dimension $\log_3 4 \approx 1.2618\ldots$, because each edge is made of 4 copies of itself each 3 times smaller. The extruded cookie cutter Koch snowflake surface, while topologically 2-D, has dimension $1 + \log_3 4 \approx 2.2618\ldots$ because it is the Cartesian product of a 1-D line and a $\log_3 4$-D snowflake curve. To paint this surface you would need $1 + \log_3 4$-D paint, not 2D paint or 3D paint, and how much of it you need would be determined by $1 + \log_3 4$-D Hausdorff measure of the surface. What the precise value of this measure is, is still an open question, according to Wikipedia.

In short, to measure a n-D object you need an n-D ruler, and fractal objects often have fractional n.

Hausdorff dimension is defined in terms of Hausdorff measure: the dimension $s$ is the value at which the $t$-dimensional measure switches from $\infty$ (for $t < s$) to $0$ (for $t > s$).

but on the other hand, you can't paint it's sides (infinite perimeter×thickness=infinite surface area)... What am I getting wrong?

The assumption behind this formula is that painting the edges of some form means replacing each edge by a rectangle.

However this assumption is not correct because at the corners of the original form the rectangles would overlap when painting like this.

To calculate the real area of the "painted edge" you first have to define how the corners of the form are painted. This image from the manual of a graphics program shows different examples how this can be done. And it is obvious that the "painted" area will be different in the three cases shown in the manual.

Thickness appears to be the width of the curve in the Z dimension, in order to bring the problem into 3D space.

Sorry for me not having understood the problem correctly.

However you could also extend my answer into 3D space:

Why should it not be possible to paint a surface having an infinite area?

I think the assumption is that varnish (or whatever type of color is used) itself has some "thickness" and therefore "painting" an infinite area would require an infinite volume of varnish.

This means that that rectangles are replaced by cuboids.

However this assumption is equivalent to the assumption that painting the edges of some form in 2D space means replacing lines by rectangles.

Paint paradoxes like this stems from the unspoken assumption that every surface will be painted with a layer of paint of a finite thickness.

There are two errors in this:

These errors may apply to every shape, no matter if fractal or not, finite or infinite.

For the paradox to work, every segment of the infinite path must be entirely covered with an evenly thick layer of paint. And if these segments were not joined but instead floating freely, then this condition could be fulfilled. 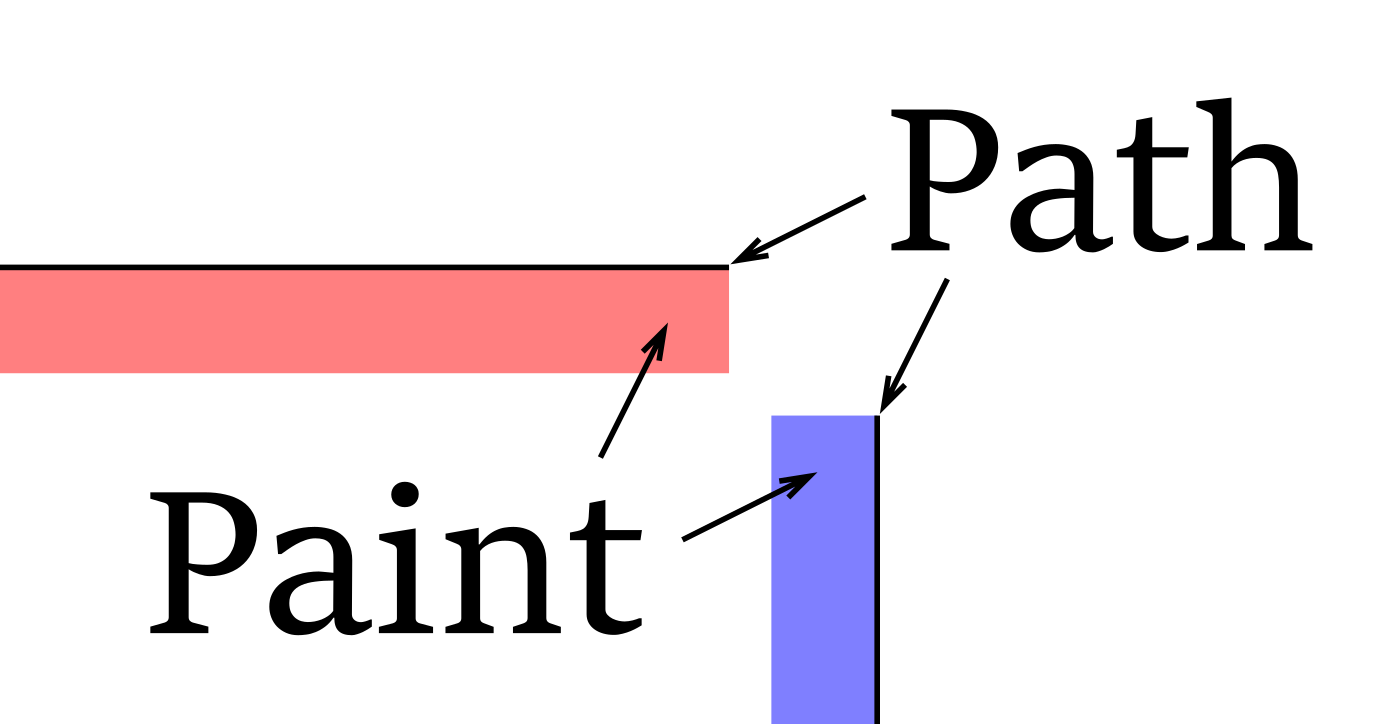 But these segments are not floating freely; they are joined. And with that, the layers of paint from neighbouring segments will bump into each other. 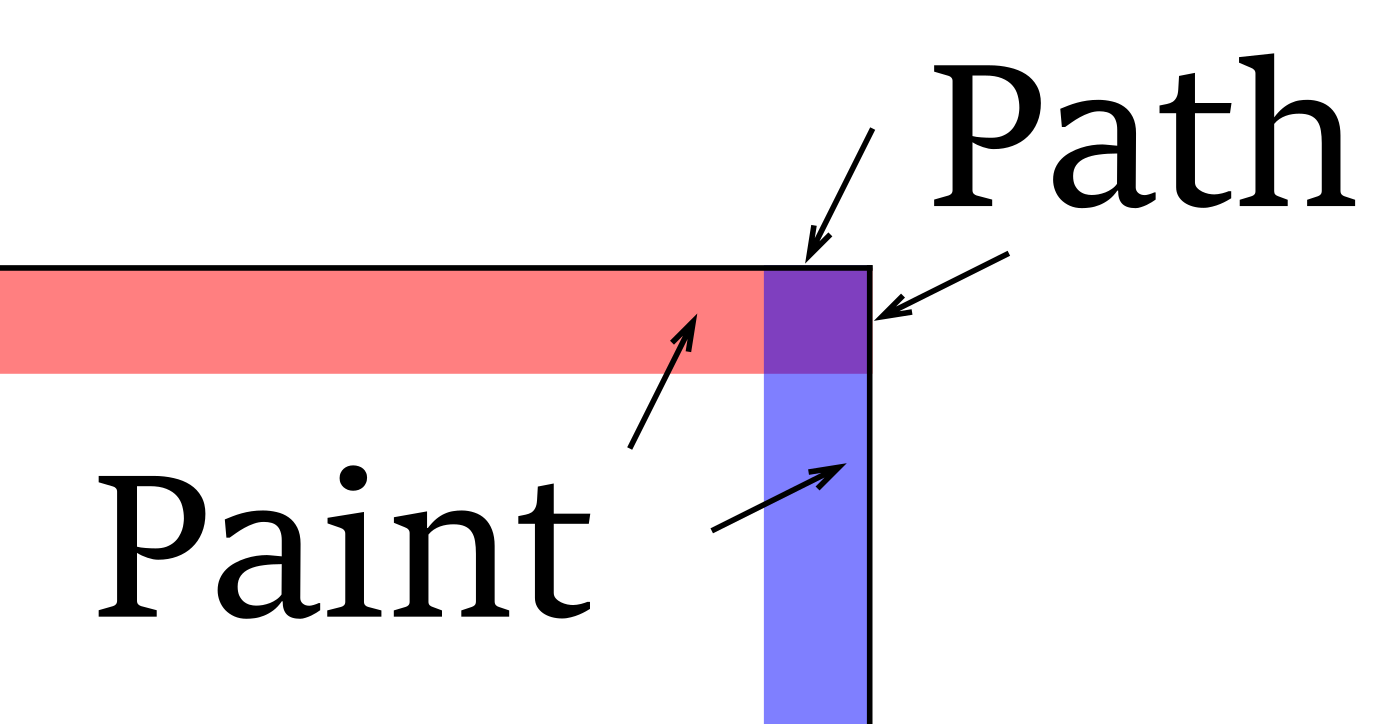 Even worse is when neighbouring paths start to interfere with each others' layers of paint, such that the paint ends up outside the shape. 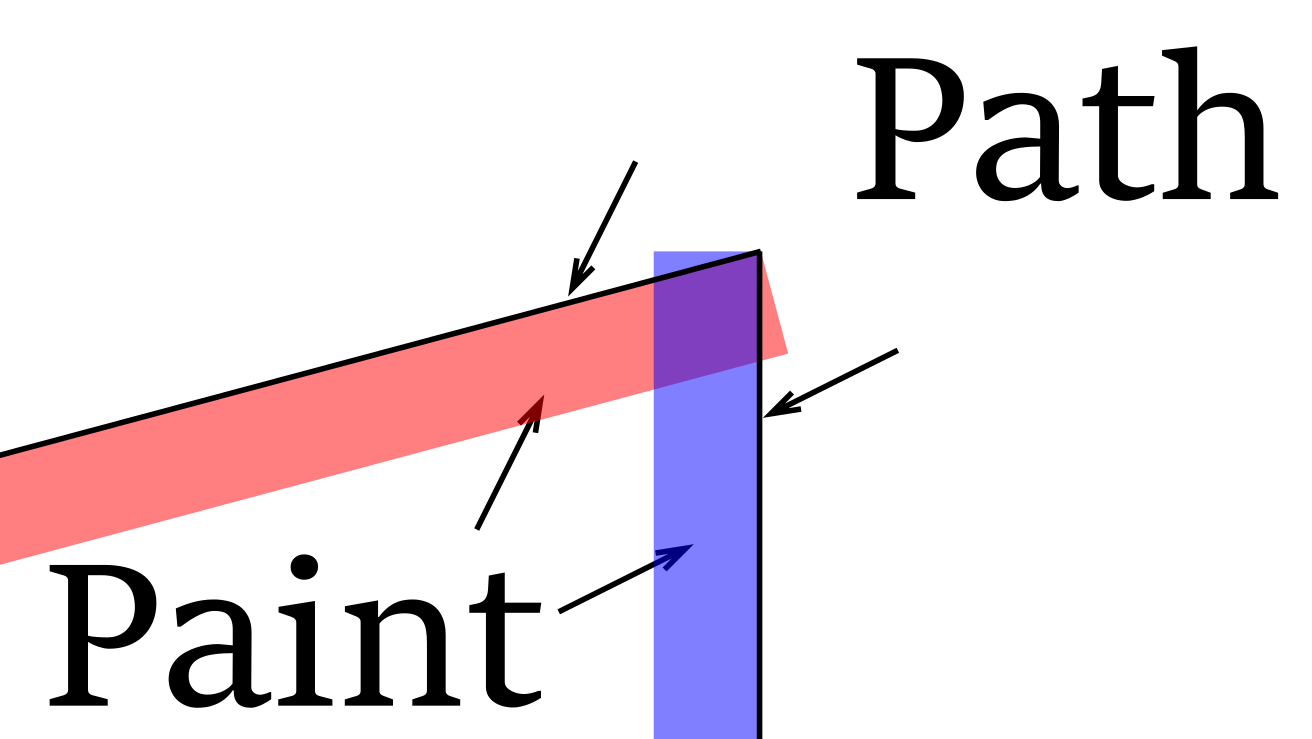 With this the paradox has broken down and it is easy to see the faulty assumptions that led to its erroneous conclusion.

Take a half of a big sweet orange fruit of radius $R$ and a half of a mandarin of radius $r<R$.
Put them together with flat surfaces, aligning centers of both fruits.

Now split both half-fruits by halves and interleave resulting quaters.
The resulting solid has the same volume, equal half the sum of an orange volume and a mandarin volume, but the surface area increased by another $\color{red}{+ \pi(R^2-r^2)}.$

Every new split of two neighboring segments and swap of two resulting new sub-segments increases the area by $\color{red}{+ \pi(R^2-r^2)}$ while preserving the original volume. As a result you can get a bounded figure with a volume known in advance but arbitrarily large surface area – you just need to slice two half-balls into segments thin enough and interleave them!

By the way, this is a 3D analogue of a flat gear/cogwheel with increasing number of ever thinner teeth, while preserving a constant radius and a constant tooth length.

The important difference between the described figures and a Koch snowflake is that consecutive iterations of Koch's curve are in a well-defined sense convergent to some 'final' curve, while sliced citrus fruits or gears are not. In layman terms we can say the Koch's curve changes are smaller and smaller in every iteration, while gear teeth disappear where they were and reappear in a bigger number (but smaller width) in new places.
However, that can be circumvented by gradually reducing widths of teeth and preserving positions of those already added.

On the other hand, the important common property of all described shapes is that they finally have infinitely many infinitely narrow niches, so you actually can't 'paint' them – any physical paint consists of particles of finite sizes, so it can't fill those super-tight corners.
Mathematically speaking, though, we have what we aimed: bounded (finite-size) figures with finite interior volume but infinite surface area (in 2D: finite interior area and infinite boundary length, respectively).

A fractal with an infinite perimeter isn't something we can physically produce -- it's only a concept. However, we can produce a physical approximation with a finite perimeter. The complexity or length of the perimeter is limited by the resources available to produce it, the materials used, and the laws of physics.

860
The staircase paradox, or why $\pi\ne4$
2
What is the logical contradiction to producing a finitely thick Koch snowflake?