I was playing with Wolfram Alpha online calculator about possible variations of an integral, the so-called Sophomore's dream. I'm agree that my example is artificious and isn't related with previous nice integral, but I'm curious to know how we can obtain and justify a good approximation of next integral.

Question. Can you provide me a justification for a good approximation (I say a few right digits, four or six) of $$\Re\left(\int_0^1\frac{1}{(\log x)^{\operatorname{li}(x)}}dx\right),$$ where $\operatorname{li}(x)$ is the logarithmic integral (this MathWorld). Thanks in advance.

I prefer some strategy using analysis, but if you want explain me how get it using a good strategy from the numerical analysis (or combining a numerical method with some facts deduced from the analysis of our integral) it also is welcome. 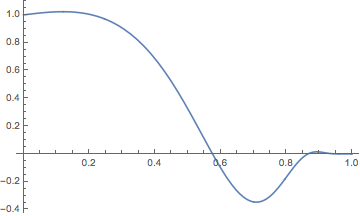 For a visualisation see here.

These little rises and falls can be modelled simply by either quadratic or trigonometric functions.

Experimenting with functions in Desmos show that the trig ones are better, and further trial and error gives the coefficients shown in the Solution.

I am going to give you a pretty eccentric answer, which may be the springboard for other future answers, or modification (improvement) of this one.

Every consideration of mine arose from a simple look of the plot above, which we can split into three parts:

I know it's not really $x = 0.5$, but since this has been made by a trivial and fast look, please grant me this, for the spirit of approximation.

Let's start from the second part: that curve resemble a parabola. Since the two points $x = 0.5$ and $x = 0.9$ are the zeroes, we can easily build the function that describes that trait: 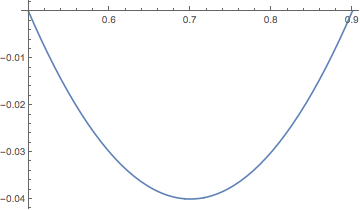 The idea of my analysis

It's to build a completely observative curve, continuous but piecewise.

The first piece is then:

Which plotted gives us, roughly, that curve. 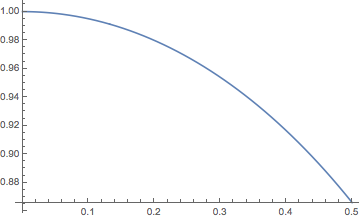 Now let's proceed with the first one, which is a bit more challenging (not much, actually). In observing it, I noticed the trend (very very approximative) of an ellipse. A quarter of an ellipse, nay.

In particular, one can describe that piece through a square root like

Our sperimental function is then created:

The integration of this function is very trivial, yet it will give you a pretty stoned result:

That being said, and now I leave this to posterity.

Notice that I tried to analyze this in the simplest way possible. Probably someone will come with big monster function or unspeakable methods far better than mine, but still.

I had fun with this, so thank you so much!