I want to do some analytic geometry in the hyperbolic plane. I haven't chosen a coordinate system yet since I don't know which would make the math easiest. It's a lot to ask for, but I want the description of the coordinate system (map and inverse map for these coordinates to hyperboloid model coordinates) and closed form expressions for as many of these as possible (intermediate variables is okay if it reduces the work needed to calculate these). Also avoid unsolveable integrals. The rest I'll try to fill in myself. I just don't want to be doing the math for all the different options myself when someone else has probably already done it before.

In my descriptions I treat points as interchangeable with vectors, though I don't assume operations that work in the Euclidean plane also work in the hyperbolic plane.

Geometry requires the origin be an actual point, though usually we assume it to be $O(0,0)$ or equivalent to simplify math.

Given origin point $O$, point $A$, and translation vector $B$. The translated point $C$ is whatever $A$ would be called if $-B$ was the origin, setting the rotation so that $O$ to the new origin $-B$ looks the same as $B$ to the old origin $O$.

This translation is the basis of the new non-commutative addition and subtraction operators: $C=A+B,C-B=A$. Since the side-angle-side congruence still holds, we have an alternative choice for the geometrical interpretation: 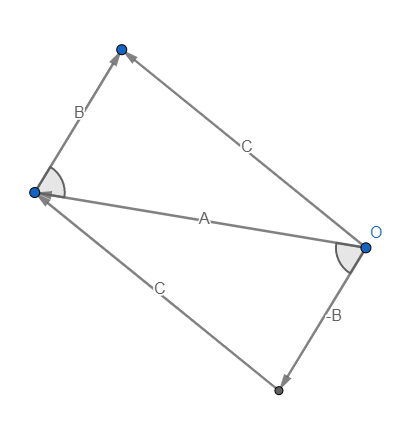 Don't mind the straight lines. $A+B\ne B+A$ because you can't have parallelograms without parallel lines. Other working geometric interpretations reduce to this or produce the same triangle.

Because this is the hyperbolic plane, translations result in rotations. This is okay.

Using this and magnitude, the equation for line length $|A-B|$ can be derived.

Since translations also rotate, this can be derived the hard way from a series of translations.

Rectangles don't work like in Euclidean space, so it's difficult to define non-uniform scale, hence I only ask for uniform.

Using this and translation, we can use linear interpolation to get a line equation $C=(1-t)A+tB=A+t(B-A)$.

Polar coordinates seem like a pretty good candidate except for translation:

There's still other obscure coordinate systems that might be easier to work with, being a little more difficult for the others but having easier translation. So I'm not settling on polar yet.

Here are six simple coordinate systems, using the hyperboloid model for comparison. The metric is determined by $ds^2=dx^2+dy^2-dz^2$.

Rotation by angle $\alpha$ around the point $\varphi=0$ : $\quad\theta\mapsto\theta+\alpha$

(Points not on this line will move a greater distance than $\alpha$, but will maintain their distance $v$ from the line.)

(Points not on this horocycle will maintain their distance $V$ from it.)

For example, the reflection of a point $\vec p$ across a plane (in psEuc space) with normal vector $\vec n$ is

The inverse is $n^{-1}=\frac{1}{n^2}n=\frac{1}{n\cdot n}n$. This points in the same direction as $n$, but has reciprocal magnitude. (Note that a psEuc vector may square to a negative number, so its inverse points in the opposite direction.)

Any isometry can be composed from reflections. Two consecutive reflections across planes intersecting at an angle $\alpha$ make a rotation by angle $2\alpha$. If the two planes' normals are $n_1$ and $n_2$, then the rotation is

Not the answer you're looking for? Browse other questions tagged linear-transformations coordinate-systems hyperbolic-geometry or ask your own question.