Game tree vs. extensive form of a game

I am a bit confused by the following statement from the Game Tree wikipedia page:

Furthermore, it is known that there may be more than one extensive form game representing the same strategic interaction. I don't believe the same is true for a game tree.

Can anyone clear up my confusion?

In game theory proper, a game tree is an informal way of referring to an extensive form game; just like the name "William" is also colloquially referred to as "Bill". The fact that the word Bill may also refer a draft of law in a different context is neither here nor there. Note that in the Wikipedia article for "Game Tree", the first line says:

For game tree as it is used in game theory (not combinatorial game theory), see Extensive-form game.

This suggests that the term game tree may have different meanings outside game theory. The example game trees shown in that article are also not what game theorists would consider as proper extensive form games.

Extensive form games do capture different "states", although not with the nodes, but with the edges/branches. Probabilistic effects are represented by introducing a player called Chance who randomly chooses from a set of actions that represent the possible states after that node.

For instance, in the following example, Y can choose to shoot at X or Z or into the air, but he will miss the target 40% of the time. This can be modeled by having Chance moving after Y has chosen his target and randomly deciding whether the shot is a hit or a miss. 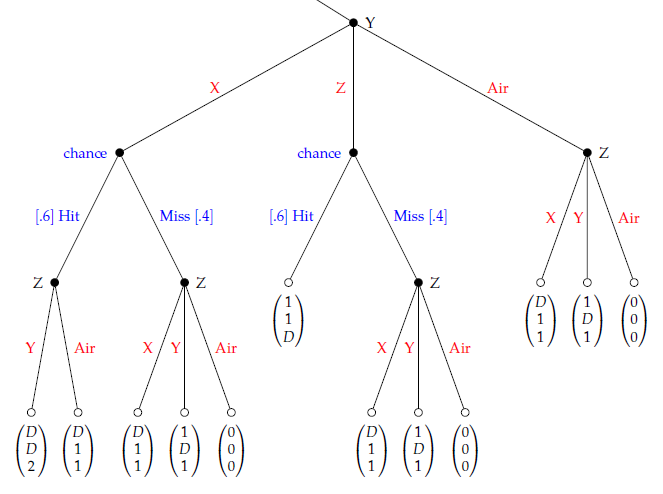 Not the answer you're looking for? Browse other questions tagged terminology game-theory or ask your own question.