Minimizing the size of a cylinder sliding in a tube

Lets define a spine curve $\Gamma$ given in terms of its arc length parameter $s$, and a family of closed curves $\Omega = \Omega \left( s \right)$. Lets say $\Gamma$ has a finite length, from $s=0$ to $s=s_{end}$. By sliding $\Omega$ throughout $\Gamma$, a tubular region $T$ is generated. Lets assume that the sliding process is perfectly defined, for instance in the case where $\Omega$ is plane, it remains always perpendicular to $\Gamma$, and its centroid is allways on $\Gamma$.

My first question is how to analytically describe $T$ in terms of $\Gamma$ and $\Omega$. 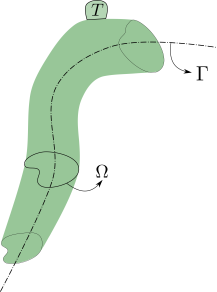 Now the main question: lets define a cylinder $C$, with parallel bases and a fixed height $L$. The lateral surface of the cylindric is not fixed, nor the shape and size of the bases. The problem consists on sizing minimally this body (i.e. minimum volume), and provide its motion law. $C$ should be moved somehow throughout the tube $T$, previously defined. The condition is that $C$ should cover the whole transversal section of $T$ at each possition, i.e. for a specific $s=s^*$, the region of $T$ between $s=s^*$ and $s=s^*+L$ should be inside $C$. 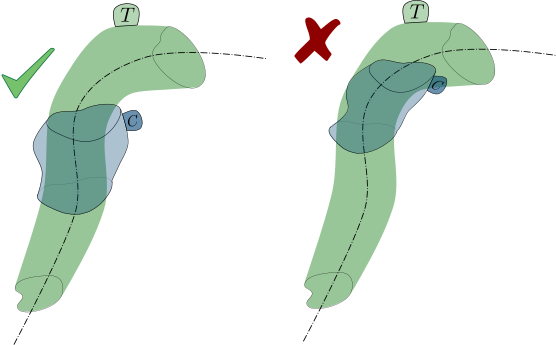 I would like to get some hints or references to face this problem. Both analytical and numerical approaches are welcome. I know the problem is quite generic, so I propose a simplified version below:

Lets say $\Omega$ is actually a fixed closed curve instead of a family of curves. Lets also say that $\Omega$ is plane. $T$ is now generated by extruding $\Omega$ perpendicular to $\Gamma$, keeping its centroid always on the spine curve $\Gamma$. Lets say that $C$ is actually a right circular cylinder of unknown diameter $d$, and it will be moved keeping its centroid $G$ on $\Gamma$, and its cross section at $G$ perpendicular to $\Gamma$. Under these conditions the only free parameter of the problem is the diameter of the cylinder, $d$. Thus, the problem is to determine the minimum $d$ that satisfies the condition that $C$ covers the whole transversal section of $T$ at each possition. 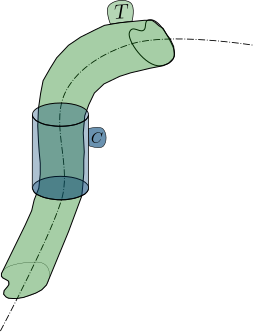 Any light shed on these problems would be very welcome :)

We are considering the simplified scheme, which already is quite challenging. I am going to summarily outline the approach that I would take to tackle it.

a) the moving reference system

Consider $s$ to be the time, so that we can help ourselves with concepts developed in physics, and which
leads to the Trinet Trihedral as rightly suggested in the precedent comment.
Thus, given $\Gamma(s)$, that is the vector $\mathbf p(s)=(x(s),y(s),z(s))$, take the speed (it will be tangent to $\Gamma$), normalize and call it $\mathbf t(s)$.
Then take the derivative of $\mathbf t(s)$, normalize and call it $\mathbf n(s)$ : it will be proportional to the centripetal acceleration.
Finally take the cross product $\mathbf b(s) = \mathbf t(s) \times \mathbf n(s)$.
The three unit vectors give a reference system travelling along the curve, with
- $\mathbf t$ tangent to the curve,
- $\mathbf n$ normal to the curve (directed towards the center of curvature) and in the plane of the curve,
- $\mathbf b$ normal to the plane of the curve.

b) the tube equation

So $\Omega$ is a plane curve, which we have better take as described in polar coordinates by $\rho(\theta)$.
$\rho$ is the distance from the centroid, and $\theta$ an angle from a reference ray (unit vector $\mathbf r$) starting from the centroid and intersecting $\Omega$ in a reference point $R$, fixed on the curve.
$\Omega$ moves with its centroid along $\Gamma$ and its plane normal to it, i.e. with normal $\mathbf t$.
But you did not specify how it rotates / keep oriented when moving:
- it could keep its orientation / rotate wrt the moving system, e.g. $\mathbf r$ parallel to $\mathbf n$, or
- keep its orientation wrt to a plane of the fixed reference $x,y,z$, e.g. $\mathbf r$ parallel to plane $x,y$, or
- keep the point $R$ at the lowest position wrt for example the axis $z$, or
- etc. 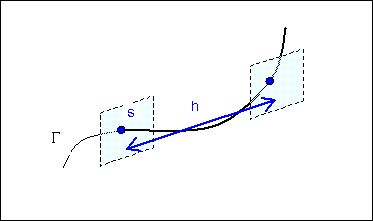 Consider a segment of length $h$ (the height of the cylinder) and the two end planes normal to it.
Let's move (translate and tilt) the segment in such a way that the initial plane crosses $\Gamma$ always at a given $s$.

We will move it as to find the position at which is minimal its max distance from the points on the tube $(\Gamma,\Omega : {\bf q}(s,\theta ))$ comprised between the two planes.
That will be the minimum radius of the cylindrical sleeve embracing the tube and starting at $s$.

Clearly it is not an easy task, and some approximations shall be adopted, depending on the curvature & torsion of $\Gamma$, irregularity of $\Omega$, ...

Not the answer you're looking for? Browse other questions tagged geometry differential-geometry optimization calculus-of-variations numerical-optimization or ask your own question.

3
Existence of minimizing geodesic in each fixed-end-point homotopy class in a complete manifold?
2
How to prove this curve lies in the plane through $\alpha(0)$ orthogonal to $u$?
0
General strategy for working out the torsion of a curve
0
Position vector in terms of a given velocity
0
Energy Function on Hyperbolic Half Plane - Critical Points?
0
Trying to prove corresponding angles are equal in case of parallel lines
0
Minimizing sequence of functional on $L^p$ space
0
Observed average 2D area of a 3D cylinder 'projection'