Killing Flies with a Checkerboard Flyswatter

Six flies rest on a table. You have a swatter with a checkerboard pattern, much larger than the table. Show that there is always a way to position and orient the swatter to kill at least five of the flies. Each fly is much smaller than a swatter square and is killed if any portion of a black square hits any part of the fly. (Source: The 2017 UW Math Hour Olympiad).

Is it always possible to kill all $6$ flies? More generally, if there are $n$ flies on the table, how many can we guarantee to kill?

I haven't really made that much progress towards solving the stronger variant. The original problem can be proven in the following manner:

Orient the flyswatter such that one of its "edges" (if the flyswatter is placed on the Cartesian coordinate plane with one black square being $0\leq x,y\leq 1$, the edges are the lines $x=n$ or $y=m$ for integer $m,n$) coincides with the line between flies $1$ and $2$. Now, "slide" it along this line so that fly $3$ is also on an edge. So, flies $1,2,$ and $3$ are now all killed. We need to kill two of the remaining $3$ flies. We now consider this orientation and placement with the flyswatter "flipped" so that black squares are now white and white are now black. Since each of the $3$ remaining flies is killed by one of these orientations, at least one of them must kill $2$ of the remaining flies, and $5$ total.

This proof, when extended, shows that we can kill at least

flies if we have $n$, but doesn't seem to be terribly extendable beyond there. I tried to prove that, for at least one of the $\binom{6}{2}\cdot 4$ choices of the original flyswatter configuration, all $3$ remaining flies are killed by the same orientation, but I was unsuccessful in relating any one configuration with another.

The only idea I had was that it might be possible to prove that one can choose "fly $3$" in a smarter fashion to guarantee that all the remaining $3$ flies are killed by the same orientation, but I was unable to prove this and, even if proven, it is unlikely to generalize.

Suppose the squares on the flyswatter have side length $1$. Then if $5$ of the $6$ flies are uniformly spaced around the boundary of a circle of radius $\frac{\sqrt2}{2}$ centered on the $6^{\text{th}}$ fly, we can't swat all flies at once. 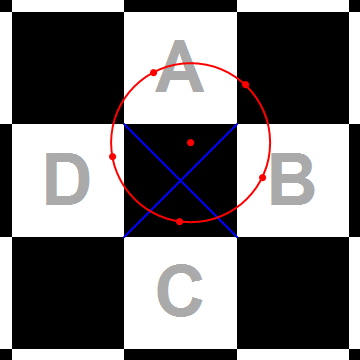 I claim that the white square $A$ contains at least a $90^\circ$ arc of the fly circle. As a result, it must contain at least one of the other $5$ flies, since they are spaced $72^\circ$ apart, and that fly is spared.

To see this, first note that the arc contained in $A$ is minimized when the center fly lies on one of the blue diagonals. In fact, no matter where the center fly is, moving the fly downwards in the diagram (until it hits a blue diagonal) always either keeps the measure of this arc constant, or else decreases it.

This is probably true for just about any closely-packed arrangement of flies. But to be concrete, suppose we have $n = k^4$ flies packed in a $k^2 \times k^2$ square grid with a distance of $\frac1k$ between adjacent flies. Then no matter how these flies are placed on the flyswatter:

Not the answer you're looking for? Browse other questions tagged combinatorics contest-math pigeonhole-principle or ask your own question.

2
A checkerboard problem
3
Find out the final survivor
3
Probability with changing number of marbles
0
How many possible setups on the chessboard?
3
$10\times 10$ checkerboard with relatively prime elements
8
Prove there exists $2\times 2$ checkerboard-colored square in a $100\times 100$ table colored black and white.
0
Putnam and Beyond 2e Section 1.5 Example
2
Tiling a $(2n - 1) \times (2n - 1)$ chessboard with one corner cut out