For the quoted question, the graph looks like this: 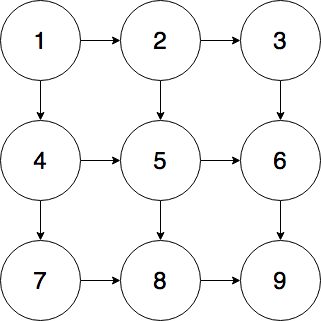 Counting the number of arrangements that satisfy the constraints is equivalent to counting topological orderings of the graph. The process of choosing such an ordering can be described by choosing a node that has no incoming edges, deleting it, and then repeating until the graph is empty. In general, however, counting the number of ways can be hard.

What is the smallest number of 3-digit sequences needed such that there is exactly 1 permutation of 9 that contains all of them?

If the graph has fewer than $8$ edges, then it must have at least two connected components, and each connected component has at least one digit that can start the permutation. So, to have only $1$ permutation, there must be at least $8$ edges. Each 3-digit sequence gives no more than $2$ edges, so $4$ sequences are required. (You have already given an example of this.)

We can still mostly argue by counting edges. (Note that none of the needed edges can come only from transitivity, as a transitive relation cannot describe directly adjacent elements of the permutation.) If the swap is at the beginning or end, only $8$ edges are needed, but overlapping prevents a solution with only $4$ 3-digit sequences. Otherwise, $9$ edges are needed, so still there must be $5$.

4-digit sequences instead of 3?

Not the answer you're looking for? Browse other questions tagged permutations recreational-mathematics or ask your own question.

7
How many topological orderings exist for a graph?

0
Symmetries of a $9$ puzzle (Rubik's Slide)
2
Question about Permutation Sets (Groups and Symmetries)
1
Permutations where no partial sum is divisible by 3 (contest question)
17
Does the concept of permutation make sense for a set indexed by the real numbers?
3
What is the shortest digit sequence containing all 4 digits sequences?
1
Is there a name for the infinite sequence of k-multisets with one element, two elements, etc.?
8
Avoiding exactly one permutation pattern
0
A math riddle involving sums of digits
0
How many different arrangements are possible with 3 digits numbers from 1-9 if we have to arrange them in ascending order?