You can find implementations and algorithms here, here and here.

If I understand it correctly it's supposed to smooth out rotations using 4 quaternions that are in sequential order in an animation with rotation keyframes.

Now I do get SLERP and I claim to have a fairly good visualization of the hypersphere and how quaternions describe it's "surface" (does the term "surspace" exist?)

However I was confused as to why the SQUAD algorithm should work. To understand it better I simply took some paper and drew the algorithm in 0.2 steps using 2d points and LERP, pretending the paper is the surface (surspace?) of the unit hypersphere. The curves I am getting look like they are exact mirror images of what I think I actually want to have.

Maybe I am still lacking some fundamental knowledge of quaternions. I have attached a scan of my drawings: 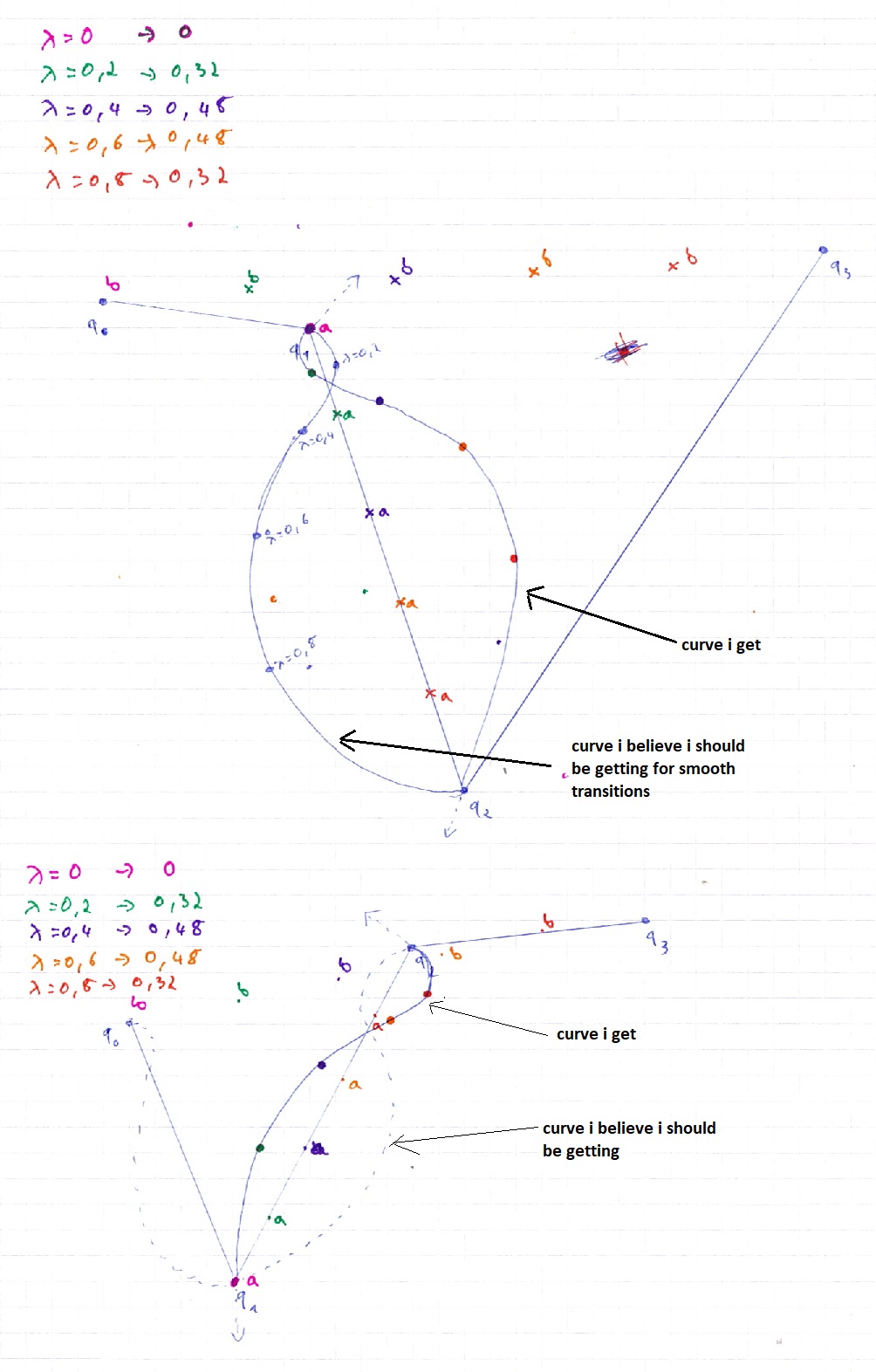 So, my concrete questions:

Okay, so SQUAD does exactly what I did on paper. But it's also not broken.

My mistake was: SQUAD doesn't expect 4 consecutive quaternions q0, q1, q2 and q3. SQUAD expects q1 and q2, together with 2 helper quaternions a and b that have to be calculated beforehand.

The helper quaternions a and b will form a quadrangle with q1 and q2 that will result in curves resembling the mirrored curves in my drawing. Therefore using SQUAD on q1, q2, a and b will result in smooth interpolations over a list of rotation keyframes.

I haven't found any detailed documentation or explanation on this unfortunately, but the DirectX SDK from Microsoft has a SquadSetup method that helped me figure this out. The open source library Cesium JS also has an implementation Quaternion.computeInnerQuadrangle for finding the helper quaternions a and b to be used with SQUAD.

I haven't really understood why the helper quaternions are calculated in the way they are, but when I implement it, the result doesn't look wrong. Considering my original question is answered, this specific issue can be adressed in a separate question.

To help me get a better understanding for what's going on, I made a simple WebGL demo comparing different interpolation methods, including SQUAD the correct way and as I previously wrongly used/understood it. The demo generates 10 random unit quaternions and then interpolates between them indefinitely. It shows 12 WebGL canvas instances, 2 per algorithm. The top canvas displays the quaternions in 4d space and the current interpolated quaternion, the bottom canvas displays a cube that is being rotated by the current quaternion.

0
Spline quaternion implementation with SQUAD: how to account for time?