The packing program represents the available space by a set of rectangles. I call these rectangles splinters. So, to start with, there is exactly one splinter. The program records the width and length of each splinter - with the convention that the length is always greater than, or equal to, the width. When trying to pack a square of side k (where k = 1/n, for some n) it will find the splinter with the smallest width that will accommodate the square. If there are several suitable smallest-width splinters, all with the same width, the program chooses one arbitrarily. The program does not need to check that the length of the splinter is sufficient to accommodate the square because the length of a splinter is always greater than or equal to its width.

An obvious, but important, optimization is a consequence of the fact that the program, when started, is given a target number of squares to pack. Thus it knows the size of the smallest square it will ever pack. So, if ever it is about to create a splinter with a width less than the side of the smallest square, it can immediately discard it - that space could never be used. In the case of packing 10 billion squares the number of splinters rises to about 2.7 million after about 230 million squares and thereafter slowly declines until, after the 10 billionth square has been packed, just two splinters remain.

Note that, as far as this packing strategy is concerned, the position and orientation of a splinter is unimportant. Equally, which of the four corners of the splinter is chosen as the home for a new square is arbitrary.

In my very first attempts at this packing I used Mathematica to do all the arithmetic, and I just specified the long edge of the rectangle as Zeta[2].

Most recently I have been using an approach where (effectively) all the rational numbers used have the same denominator, (d, say). So I can think of the original rectangle to be an array of square dots, each dot being of side 1/d. So, the "1" side would contain d dots, and the Zeta[2] side would have m dots where m/d is just less than Zeta[2].

Using this method I was able to pack $10^{12}$ squares in about 26 hours. The exact value of d does not seem critical. I did the trillion square packing a couple of of times:

Note, however, that d must be a multiple of 6, otherwise the 1/6 square cannot be packed.

Something that surprised me was that relatively small values of d will allow relatively large numbers of squares to be packed:

This answer answers the question only approximately, but at least does so rigorously.

states: Let there be given a set of squares of total area $A$ the largest of which has side $D$. Such a set can be packed in any rectangle of area $2A$ and shorter side $B$, if $D\le B$. 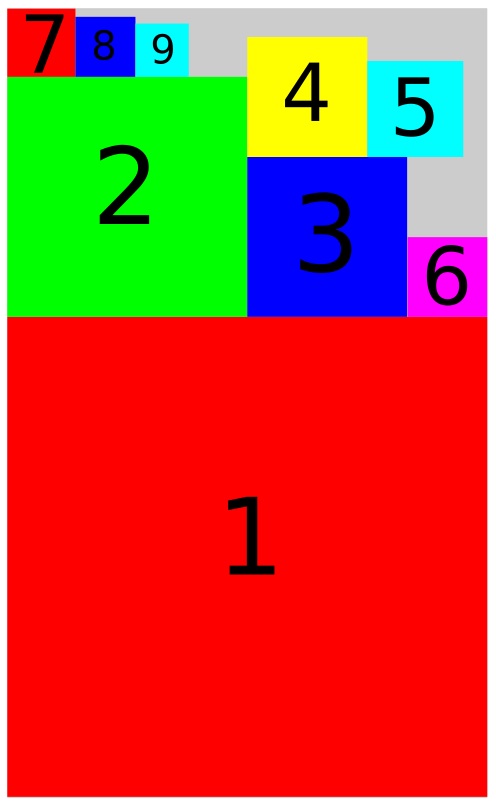 This shows a placement of the first 9 squares. The goal is to keep the unused space as contiguous and usable as possible. Note that the 6 is an exact fill, the 7 nearly so but there is a slight gap at the top. (fig. 1/3) 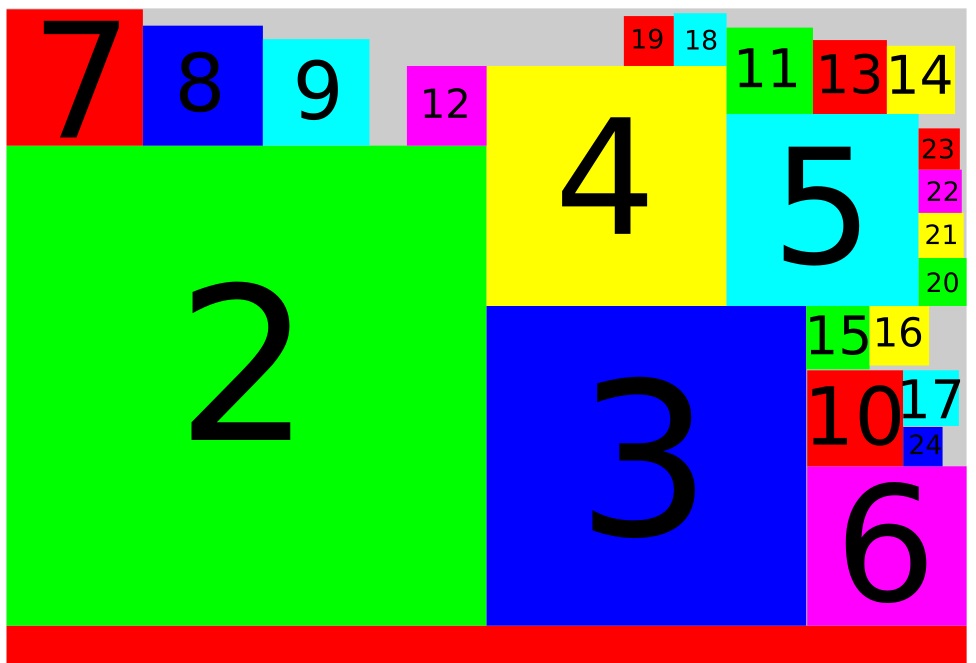 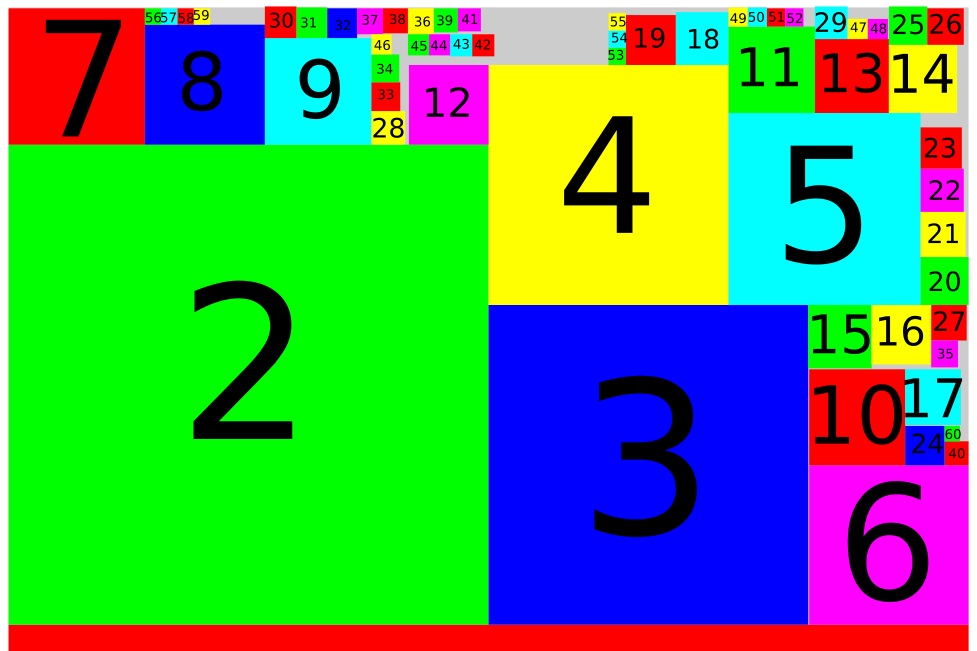 Squares 1-60. This shows there is not an early bottleneck in this problem, and we continue to preserve a relatively large unused space above the 4. As we start placing squares greater than 60, there is still space above the 8 that can accommodate them, and spaces above the 23 and 47&48 can also be used as squares in the 70 and 80 range need space. This is not a convincing demonstration for a complete solution, but shows it is possible. (fig. 3/3)

Not the answer you're looking for? Browse other questions tagged rectangles packing-problem or ask your own question.

8
Is it possible to put all of the $\frac{1}{n}$ side squares into the unit square?
1
Basel Geometric Packing

22
How many circles of a given radius can be packed into a given rectangular box?
0
Packing custom length squares into a rectangle with a custom ratio
2
Method for optimally packing a group of squares from (1 x 1) to (n x n) into a larger square?
3
Filling a rectangle with congruent squares in two columns
5
How many squares in a rectangle?
4
How many squares can be packed on a spiral?
12
Side length of the smallest square that can be dissected into $n$ squares with integer sides
0
How can I quickly tell if a valid solution exists to pack smaller rectangles into a bigger rectangle without overlapping?