Why is any arbitrary directional derivative always recoverable from the gradient?

But nonetheless I find it surprising that knowing the derivative in just 3 directions at a point (the gradient) is sufficient to figure out what it must be in any direction. The equation states it must be the case that the derivative in an arbitrary direction must be a weighted combination (dot product) the gradient with the weights determined by how x-axis'y and how y-axis'y the direction u is. What prevents me from constructing a function where this isn't true? Why can't a simultaneous increase in x and y give a dramatically different result than either alone? (e.g. a function that rises in the x+ direction and the y+ direction, but falls dramatically along the diagonal?)

Why can't a simultaneous increase in x and y give a dramatically different result than either alone? (e.g. a function that rises in the x+ direction and the y+ direction, but falls dramatically along the diagonal?)

Remember that a point and two slopes in non-parallel directions are all that we need to completely determine a plane. So, if the tangent plane to the graph of $f(x,y)$ is well defined at a point, the slopes of the tangent plane in the $x^+$ and $y^+$ directions completely characterize the plane. A plane, being flat, can't increase along the $x^+$ and $y^+$ axes and decrease in between.

The situation in two or more variables is no different. In one dimension, the slope in the $x^+$ direction determines a line. In two dimensions, the slopes in the $x^+$ and $y^+$ directions determine a plane. In either case, we define the function to be differentiable if, around the point we started with, the function is well approximated by that line or plane in every direction that we can go, given the number of dimensions we are working with.

As I said in the comments, this is just the chain rule. Here's the formal argument.

By the multivariate chain rule (I'm assuming the hypotheses of that theorem are satisfied),

(You don't need the dot product in this expression, if you interpret $\nabla f$ correctly as a row vector.)

As for the intuitive idea, the point is that in the infinitesimal limit (which is what derivatives measure), a differentiable function is well-approximated by a linear one, so its rate of change in any direction must be a linear function of the changes in the coordinate directions.

This is because of the definition of the gradient and in general of what it means for a function $f$ to be differentiable (at a point $p_0$ say).

Intuitively, because $f$ is differentiable at $p_0$ is aproximated by a linear function (which in the case of $\mathbb{R^n}$ is exactly the gradient)aproximates really well. So it is logical to believe that in a small neighbourhoud around $p_0$ $f$ behaves almost like a linear function. These aproximations are made more expliciti with the Taylor theorem.

Let me say that this way of thinking, while not rigorous,provides a great deal of intuition behind very importan theorems e.g. the inverse function theorem.

It is because for a differentiable function $f:\Bbb R\to\Bbb R^n$ an amount of $n$ vectors is enough to know the tangent plane. All tangent vectors lie in the tangent plane and an $n$-dimensional plane is uniquely determined by $n$ (linearly independent) vectors. 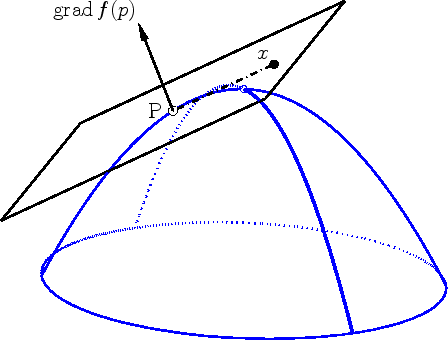 If you have a function with a "sharp bend" (e.g. think about a roof), where all directional derivatives exist, but no unique tangent plane, then this will not work because not all tangent vectors lie in a plane.

Not the answer you're looking for? Browse other questions tagged calculus multivariable-calculus partial-derivative or ask your own question.