Angle between vertex and center of face in Platonic solids?

I'm trying to find the angle between a vertex and the center of one of the nearest faces in a dodecahedron. This would be nice to know the formula and/or number for all the Platonic solids though. I'm using these to model some 3D shapes in Blender and managed to work around the regular icosahedron modeling by using the dihedral angle then parenting relative faces and rotating them around eachother's axis's, but the same trick won't work (or at least I can't see how to make it work) to put the dodecahedron's faces into the icosahedron's vertices when starting from a point where each shape contains a face sharing a common Z axis (pictured because I know I don't have the proper terminology.) 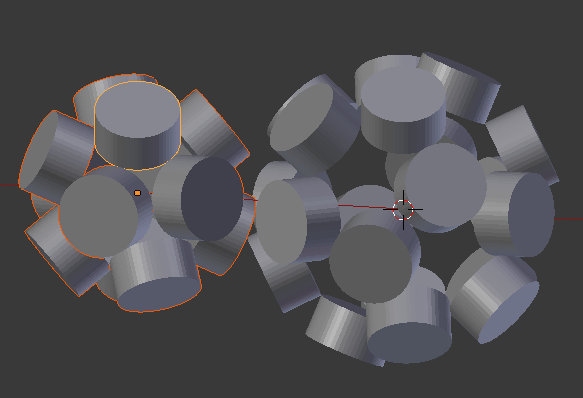 The short of this is that I'm trying to rotate a dodecahedron such that the face-centered objects are aligned to the vertexes of a regular icosahedron starting from a position where they share a common axis between a pair of faces (each cylinder in the above image is face-centered.)

I found the answer on Wolfram Alpha via the following formula:

Not the answer you're looking for? Browse other questions tagged geometry platonic-solids or ask your own question.

4
Closed polytope loop
9
Maximal volume for given surface area of an $n$-hedron
3
Problem in understanding a proof there are five Platonic solids.
4
Surface area of platonic solids inscribed in unit sphere.
1
How to tell which faces of a convex solid are visible.
2
Which geometric shape of icosahedron origin has 180 faces 270 edges 92 vertices?
1
For certain pairs of Platonic Solids, are the edge-centers and face-centers equivalent?