Definitions. Let $X$ be any non-empty set and $\mathbb{F}$ a field. We define:

From the definitions above I have the following facts:

1) $\mathcal{F}_X$ is a vector space over $\mathbb{F}$ along with usual function sum and scalar product.

Now I have a theorem for universal property for vector spaces. It's from my class notes, but I think it is not correctly stated and/or complete, especially the (b) part. 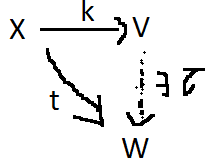 I stated exactly as it is in my notes. I'm not sure what the $k$ function is, but I think it's any map from the "basis" $X$ of $\mathcal{F}_X$ into the space $W$ and from the isomorphism and the fact that $k_0$ is injective we can conclude that $k$ is injective (so $k(X)$ would be a basis for $V$). Am I right? There must be given additional hypothesis or there's something to be corrected in the theorem?

Thanks in advance. (P.s. sorry for the poor diagram, I was not able to build one using MathJax =< )

Not the answer you're looking for? Browse other questions tagged linear-algebra abstract-algebra universal-property or ask your own question.