A construction using straightedge and compass

Given a circle, it's easy to contruct its center.

The question is: given an ellipse, draw the foci.

I don't know whether it's possible to do this using only straightedge and compass.

Let $\lambda$ a given ellipse, let's draw its foci.

See the figure below: 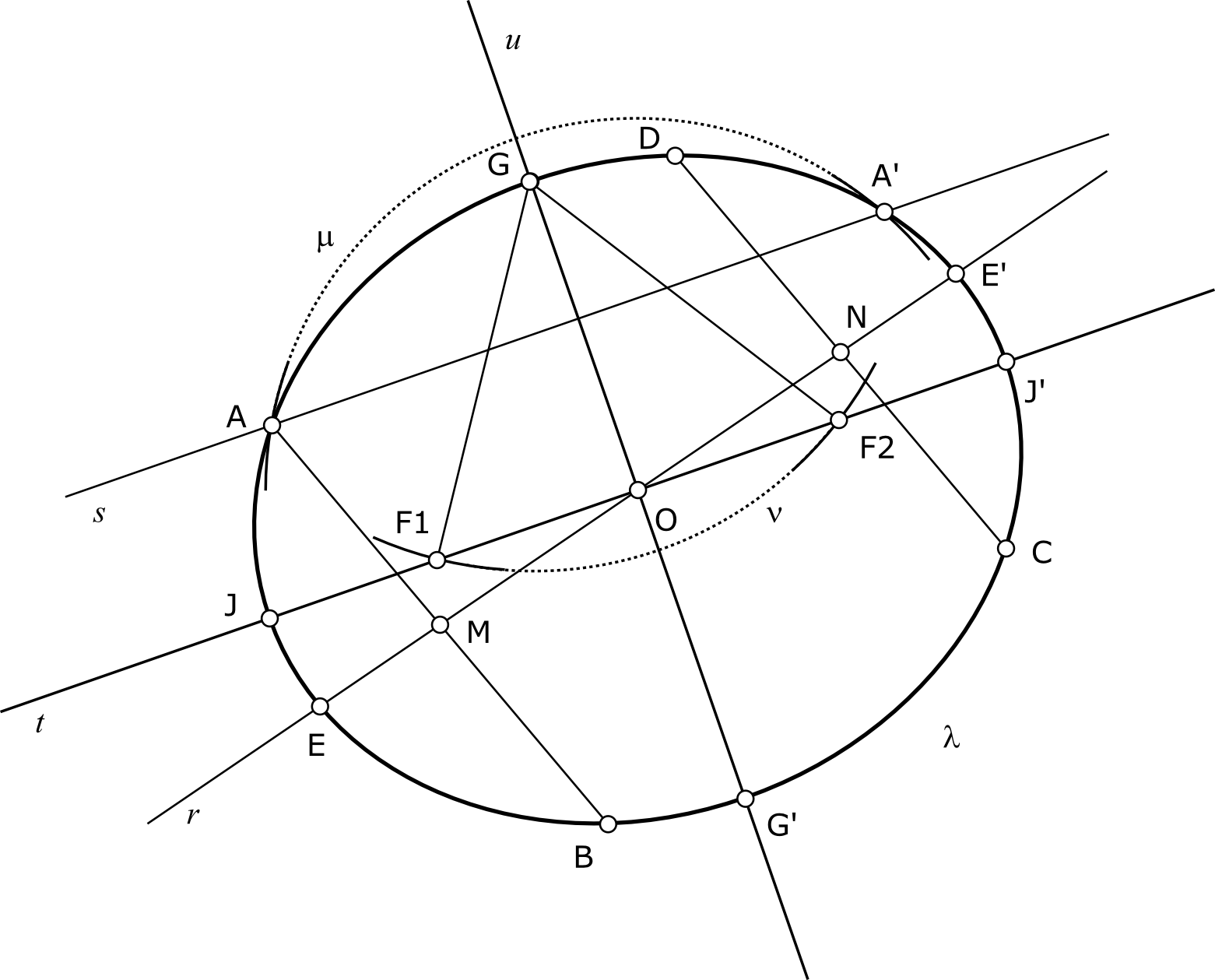 Draw two perpendicular coordinate axes. Choose somehow $6$ points on the ellipse ($5$ are enough). (The "somehow" is there because for classic constructibility, all points constructed have to be explicit. Here we will have to select at least one "random" point.)

By projecting these $6$ points on the axes, we can construct the $x$ and $y$-coordinates of our $6$ points. With straightedge and compass, any required squares and products of these coordinates can be constructed.

The ellipse has equation of shape $ax^2+bxy+cy^2+dx+ey+f$ for some constants $a$ to $f$. Thus the constants satisfy a system of $6$ linear equations in $6$ unknowns, with constructible coefficients. Solving the system involves only arithmetical operations, which can be done by straightedge and compass.

Now the ellipse can be put in standard form using arithmetical operations and square root. And as has been pointed out by rschwieb, once that has been done the foci can be constructed by straightedge and compass.

Remark: This settles the question of whether the job can, in principle, be done. There remains the task of doing it in a geometrically nice way. The above recipe for a construction gives no information about that.

There does remain something interesting about the construction. It is one of many instances where a geometric problem is solved using coordinatization. Because the elementary theory of real-closed fields is decidable, most geometric problems of the classical kind can be answered, albeit clumsily, by a computer program.

16
With what analytic functions can one construct the $(x,y)$ coordinate axes using a straightedge and a compass?
1
Finding the focus of an ellipse with ruler and compass

5
Given a drawing of an ellipse is there any geometric construction we can do to find it's foci?
5
A circle has the same center as an ellipse and passes through the foci $F_1$ and $F_2$ of the ellipse, two curves intersect in $4$ points.
2
Constructing the asymptotes of a hyperbola by compass and straightedge.
11
Graphically locate the axes or foci of an ellipse from 5 arbitrary points on its perimeter.
3
Straightedge and compass construction: focus of a parabola given $A,B,V$
4
Geometric proof of equivalence between two constructs of ellipse
1
Approximation of the quadratic formula with straightedge and compass
2
Constructing the major and minor axes of an ellipse wth compass and straightedge
7
Is there a geometric construction that finds the intersection of two conics, given only five points on each?
1
How to construct the foci of an ellipse given both its axes' support lines and two points on the conic