How should I interpret a homotopy schematic? 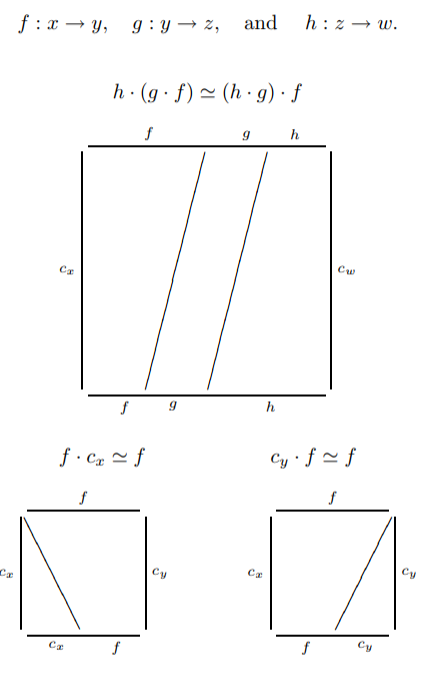 Here's what I understand so far: - The top and bottom rows are different compositions of paths, and the schematics are aiming to show equivalence.

Here is what I don't understand:

I had a lot of difficulty with these schematics when I first saw them as well - I could roughly understand what they were trying to show, but not how they provided any proof for me. It was helpful for me to actually write out an equation.

You can verify that this $H$ fulfills all the conditions mentioned above, so $H$ gives us a path homotopy between $(f \cdot g) \cdot h$ and $f \cdot (g \cdot h)$.

The thing is that given the domain diagram, there was only one way to write this equation. It helped me to see that I could come up with the equation that matched the diagram, but as you can see it is an ugly equation and admittedly it took a while. That's why it's left just as the domain diagram without much else explanation, but it's a little opaque at first.

It might be worth trying to write these equations for the other two diagrams (they're much simpler) to convince yourself of these ideas.

6
How to read homotopy schematics?
0
inverse equivalence $\Pi(X) \to \pi_1(X,x)$ in proof of Van Kampen theorem
3
Spaces homotopy equivalent to $A_{\infty}$-spaces
8
The cone of a topological space is contractible and simply connected
1
What does “modulo a homotopy” mean?
1
How to think about Fundamental Groups
3
Is there any geometrical intuition for the Hurewicz theorem?
3
How to prove (rigorously) that these spaces are homotopy equivalent?
1
How to interpret the structure of elements in a path-connected topological group.