Does this dynamical system show an “absorbing area” or a “chaotic area”?

I am following the technical report by C.Mira: "Noninvertible maps: notion of chaotic area vs that of strange attractor" in order to characterize the behavior some dynamical systems of my own.

In the mentioned article, there is a definition of absorbing area as a region such that the successive images of all points of a neighborhood, from a finite number of iterations, enter into it and cannot get away after entering. In the other hand a chaotic area is an "invariant absorbing area, containing a fractal set made up of repelling cycles with increasing period... giving rise to orbits with the property of sensitivity to initial conditions".

The context and the question: I have a family of discrete-time, nonlinear, dynamical system (the same one described on this preceding question):

Usually most of the systems of the family arrive to a periodic orbit in relatively few iterations (hundreds or few thousands). But some of them not. This is one of those that do not arrive to an attractor, $S_{D=4, t=2, f=1}$. It is part of the region inside the red frame (the picture shows the whole family and $S_{D=4, t=2, f=1}$ is one of the systems only, click to enlarge): 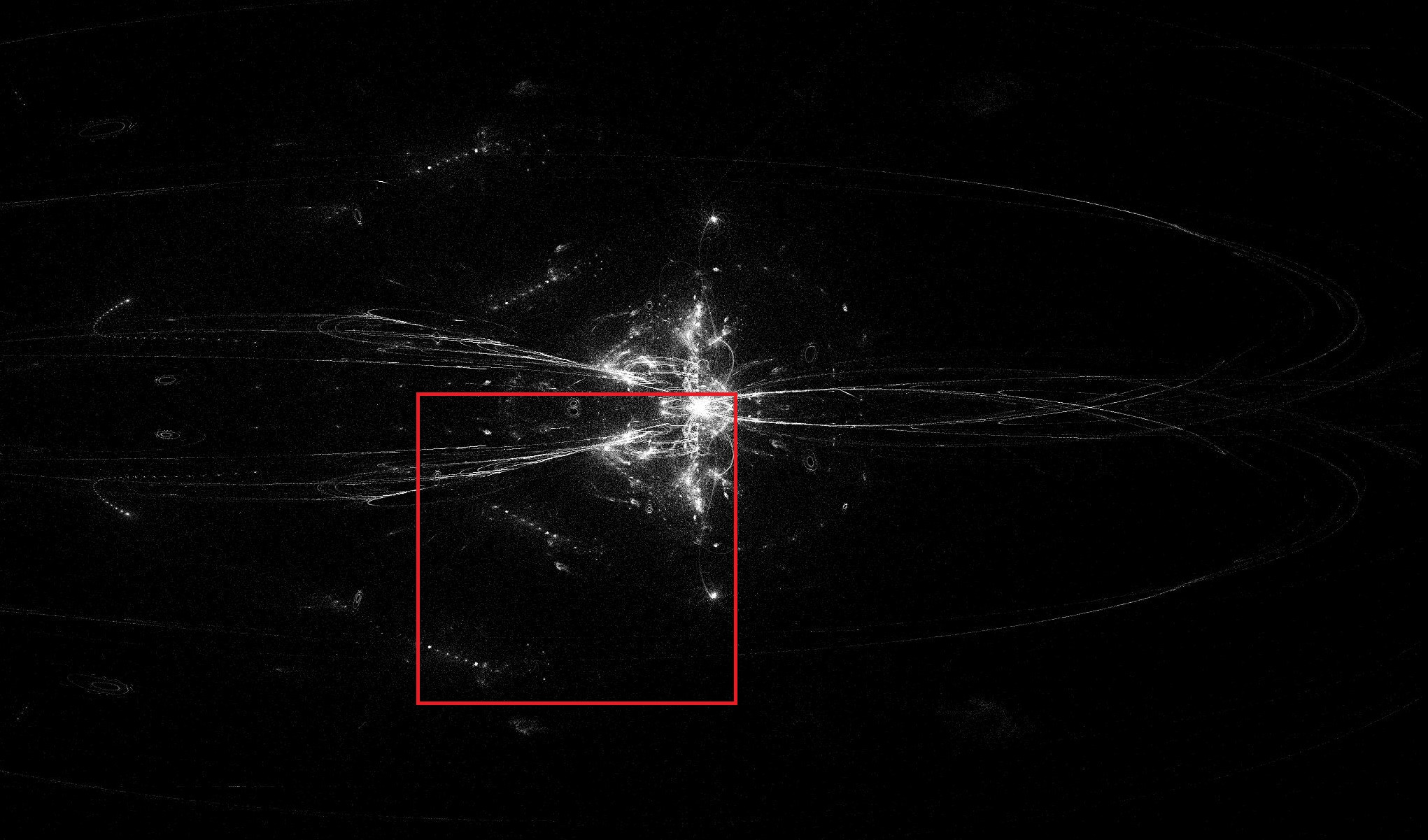 Looking at the image, it seems to have three symmetries: it is easy to see that the system generates some clusters of points in different regions of the space and they are similar, there is rotation and specular images inside the structures generated by the system. The more iterations I add, the more points get accumulated in those areas, so I tend to think that this is an absorbing area and it is not a chaotic area.

Question: can I say that this is a chaotic area, or it is just a nonchaotic absorbing area? or is there another concept that express this kind of cluster-like accumulation better than those ones? Thank you.

It looks like your regions are indeed chaotic attractors or at least chaotic absorbing sets.

Not the answer you're looking for? Browse other questions tagged recurrence-relations dynamical-systems visualization chaos-theory or ask your own question.

6
Recreational math problem: $f(x)=\frac{x^2}{2x+101}$
3
Intuition behind dense orbits
0
Making something a control parameter or a variable when analysing a dynamical system

3
What is the shape of parabolic critical orbit?
24
Why is this family of dynamical systems able to produce spirals and clusters of points?
0
Making something a control parameter or a variable when analysing a dynamical system
3
Is the “sensitive dependence on initial conditions” of chaotic systems referring to the seed, control parameters, or both?
2
Are multiple kinds of attractors (chaotic and otherwise) possible within a single system of differential equations?
12
Why do chaotic systems need dense periodic orbits?
1
What is the meaning of volume of dynamical system