The need for rigorous proofs in Sets

I am a $10$th grade student who is studying Elementary Set Theory. In a lot of questions, I come across, the solution or rather the proof requires being proved by identities or by assuming an element of a set, i.e $a \in \{A\}$ and so on. What I am unable to understand is why we require rigorous proofs for Sets Theory and to broaden the scope of the question why do we require rigorous proofs at all in Mathematics?

Because we don't really know something is true until we prove it. Here's my favorite example of this:

Question: Given a circle, what is the number of regions determined by n points on its perimeter?$^{[1]}$

We begin by looking at different cases, starting from when $n=2$:

The pattern seems clear, doesn’t it? The number of regions appears to be doubling every time we add an extra point. So we suspect that with $n = 5$, there will be $16$ regions. Let's check to make sure: 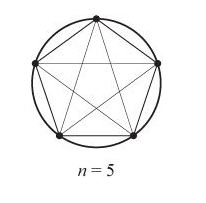 That was tedious to do, but clearly we're right!

Okay, so for $n\geq2$, we have that the number of regions with $n$ points, $R(n)$, is given by $2^{n-1}$. Why bother looking for a rigorous proof of this when we can just accept that it's true and get on to more interesting results in mathematics? We have papers to publish and 80 years to live, so we shouldn't waste time proving minutiae that are obviously true. 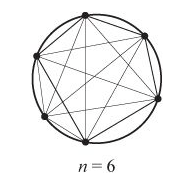 And that’s why mathematicians need proof. We require proof because things aren't always as they seem. Mathematicians won't accept something as true just because it's true for all numbers less than $2\times10^6$. We need cold, hard, logical proof that something is always true, because for all we know, a claim might turn out to be false when $n = 2\times10^6+1$. Or we might think that a general idea is true, and say so with a condescending "obviously," when in fact, it turns out that sometimes the math isn't what we expect.

Not the answer you're looking for? Browse other questions tagged elementary-set-theory soft-question or ask your own question.

16
Why do statements which appear elementary have complicated proofs?
50
What are good books/other readings for elementary set theory?
29
Why do introductory real analysis courses teach bottom up?
10
What are the advantages of proof-relevant mathematics?
9
Suggestions for high school?
1
Why are certain sets defined?
1
Proof of two theorems in elementary set theory
3
Multiple simple questions from someone who just started self learning mathematics