Why an ordered pair gives a torus?

I saw a video (Who cares about topology) that explained the inscribed square problem. The problem say's that you have a simple closed loop in the plane, prove that there's at least one square such that all vertices are in the loop.

But I didn't understand a part of it.

In the video they say that if you take an ordered pair of points that are in the loop, you can map it to a specific point in a torus.

Then he show's that the same can be say for unordered pairs, but in a Möbius strip.

What's the problem with that?

Why a torus and not a Klein bottle?

A simple closed curve is homeomorphic to $S^1$ (Circle).

So, for the pair of points $(a, b)$ it's possible to draw a circle, where a point in this circle corresponds to $a$ (or a point to the curve), and for each point in this circle, there's another circle that represents the points of $b$ (The same curve).

Again, to see why the torus, but more visually. 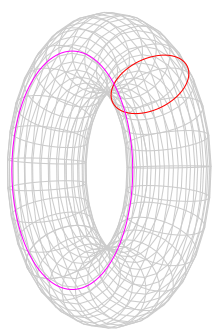 So, you chose first a point from the purple circle ($a$), and then another point from red circle ($b$), thinking that both of those circles are the same than the simple closed curve.

Not the answer you're looking for? Browse other questions tagged general-topology klein-bottle or ask your own question.