I am trying to understand geometrically the ramification of primes in a finite separable field extension.

We can picture both $X$ and $Y$ as algebraic curves and $X$ as a ramified cover of $Y$. I am trying to understand the precise geometric meaning of all the previous definitions in terms of this geometric picture. 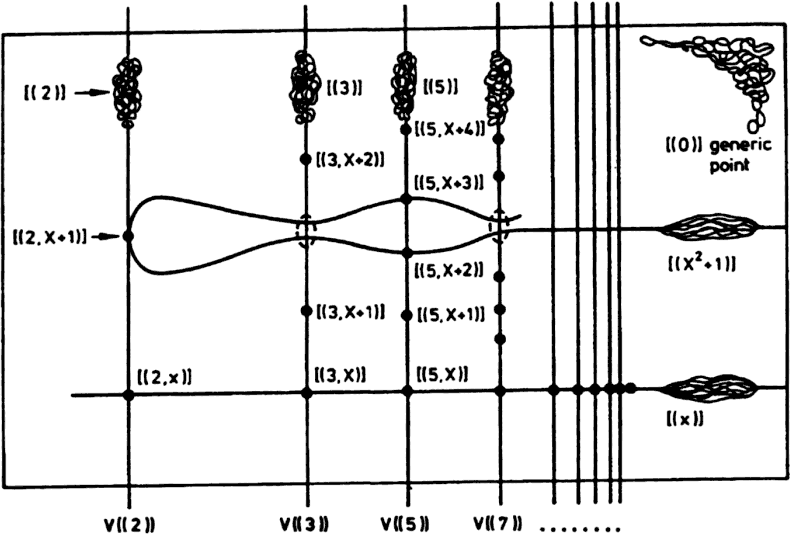 The picture above $(2)$ matches this interpretation perfectly, since $(2)$ ramifies in $\mathbb{Z}[i]$. And so does the picture above $(5)$, since $(5)$ splits into two primes in $\mathbb{Z}[i]$. But now I have a problem with the picture above $(3)$. There should be only one point, namely $(3,X^{2}+1)\in X$, but I guess Mumford just doesn't draw it. But even if he did, how would he draw this point without creating a singularity on the curve? Because, being the spectrum of a Dedekind domain, $X$ should be a regular curve, right? So how would we draw this point?

But if you draw this point in the naive way, introducing a singularity, suddenly the residue degree seems to make some geometric sense to me: it seems to be the number of parameters that we need to describe the curve around the corresponding point. How much of this naive impression is true? Is this just a coincidence? Because algebraically this doesn't make much sense to me. One should be able to describe the curve locally with a single parameter, because all the local rings are DVR. I will try to summarize all these doubts in the following question:

What is the precise geometric meaning of the ramification index and the residue degree?

Finally, if possible, I would like to hear some clarification comments on the source that started all these doubts (initially I was naively happy with my professor's interpretation): Neukirch's Algebraic Number Theory. In chpater I, Section 13 (One-dimensional Schemes) he draws this ramification situation:

I have several problems with this picture.

Neukirch says that this picture is only a fair rendering of the algebraic situation when the residue fields in $A$ are algebraically closed, but this doesn't help much to answer the previous questions.

Thanks for the spending the time to read this long question. I am quite confused with this issue and I wanted to express my doubts as clear as possible.

From my perspective, inertia does not really have a geometric flavor. In other words, looking at $\mathbb{Z}[i]$ and its fiber over $(3)$ is hard to picture because it is very far from our usual intuition of topological spaces. If I really need to imagine what is going on, I would say that the fiber has two points (indeed $\mathbb{Z}[i]\otimes_{\mathbb{Z}}\mathbb{F}_3$ is of dimension 2 over $\mathbb{F}_3$) but these two points lies in an algebraic extension.

Perhaps a better way to have some geometric intuition is to start with more geometric objects than $\mathbb{Z}[i]$.

So here are the different fibers :

See, this is not easy to picture it : if we draw only real points, these inert primes should have empty fibers. If we draw complex points, well, $\mathbb{C}$ being algebraically closed, there is no inertia...

Here the map $X\rightarrow Y$ is of degree 2, so a prime in $Y$ is either split, ramified or inert. Of course if the degree is greater than 2, the fiber over each prime may be a bit of everything. For example, look at $X=\operatorname{Spec}A[x]/(y-P(x))$ where $P$ is your favorite polynomial of degree 3 or 4, and draw horizontal lines.

Now let's have a look at the second picture. I remember that when I first met them, I asked myself questions similar to yours.

The idea of this diagram is to represent the behavior of a solution of an equation $P_{y_0}(x)=0$ where $y_0$ varies.

If we want to add inertia, we could imagine points like those of Mumford's picture : inert primes do not make embranchment points, so there should be several line which does not meet through a single point (single because we have only a single prime to represent several points in an algebraic extension). This is what you see above $(3)$ in Mumford's picture for example.

I believe the following holds: Given any finite extension $K:=\mathbb{Q} \subseteq L$ with rings of integers $\mathcal{O}_L$, we get a canonical map

The "geometric" picture seems to be: Over $U$ it follows the number of closed points in the fiber is constant and the fiber rings are reduced. Outside of $U$ this is no longer true.

You find a related question here: