Is there an approach to this problem that uses the Theorem of Descartes circles? or some other slightly general method? I have looked at scores of links about these topics on this site and elsewhere, and can use Descartes' curvature theorem for easier problems where we are given 3 tangent circles, find the 4th. I don't know how I could apply it here and I didn't really follow one of the articles about extending it to more circles. Extension of Descartes' "Kissing Circles" Theorem Maybe it is just that my circles are not mutually tangent?) I would also like to be able to toss in another tangent circle somewhere and still be able to find the surrounding tangent circle. I wouldn't be able to do that by the symmetry method that I have used. 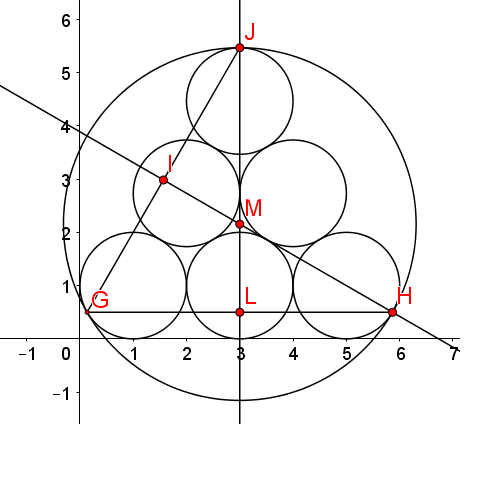 Problem Statement: Each of 6 circles is radius 1, and the bottom row of 3 circles have the same y-coordinate. Two identicle circles are closest packed right on top of the first row. A third identicle circle finishes the stack on top. Find the equation of the surrounding circle that is just tangent to the three corner circles. See figure.

I was successful by the following method. 1) Observing symmetry, I could calculate the point coordinates of J. 2) I let point G(x,y) and H(x,y) be unknowns. 3) I set up 4 equations and solved them simultaneously.

Once I had point J, G, and H, finding the circle center and radius was easy enough.

Aside: Tangent circles, in close pack configuration, has interested me for a long time because it is relevant to pharmaceutical vials in various trays and loading equipment.

What I would do for a general solution Let's name the circles with radius r $C_{1-6}$ from bottom left to top right and $C$ the big one.

The center $M$ is easy to find since we know its distance from known circle centers. That's all u need to define $C$'s equation

$^*$I need to also prove that $M$ is a center as lema. If the above are true then its the only thing missing for the proof to be full

P.S. Also yes this does not correspond to the kissing circles theorem cause thy are not mutually tangent. These has relation to Apollonian circles. https://sites.math.washington.edu/~julia/teaching/445_Spring2013/DescartesAndTheApollonianGasket%20(1).pdf