Is there a fundamental reason that switching the order of the limits in an integral results in the negative, i.e., $$\int_b^af(x)\,dx = -\int_a^bf(x)\,dx?$$ As far as I can tell, this is just chosen as a convention so that the rule $$\int_a^bf(x)\,dx + \int_b^cf(x)\,dx = \int_a^cf(x)\,dx$$ works out. But I was wondering if there was some more fundamental reason for this, perhaps somehow relating to signed measures or something.

The reason I'm asking is that we're trying to figure out how to define things like $$\sum_{n=4}^1n$$ in the computer algebra system SymPy (see this discussion). The natural thing, for me at least, is to define this as 0, since it represens a summation over an empty set ($\{x\,|\,4\leq x\leq 1\}$). But it seems that some authors define this as $-\sum_{n=2}^3n$, so that the convention $\sum_{n=a}^bf(n) + \sum_{n=b + 1}^c f(n)= \sum_{n=a}^cf(n)$ works out (namely, Karr in "Summation in Finite Terms"). That got me thinking about integrals, and whether in that case the rule is also defined simply for convenience, or whether there is actually a fundamental motivation behind it in the definition of the integral.

I know that summations are just special cases of integrals (at least in the Lebesgue sense), so learning why things work for integrals would help me understand how things should work for summations.

In order to deal with this question one has to distinguish (i) integrals with respect to a measure and (ii) integrals over a chain. For integrals over real intervals$[a,b]$ they are pretty much the same, therefore the difference does not become visible in everyday notation.

(i) After constructing Lebesgue measure $\mu$ on ${\mathbb R}$ and the integral with respect to this measure it makes sense to consider expressions like $$\int_{[a,b]} f\ {\rm d}\mu\ .$$ Here $-\infty<a\leq b<\infty$, and the interval $[a,b]$ is just a measurable set, but has no forward or backwards orientation. (I use the roman ${\rm d}$ to indicate that the "unsigned measure" is meant.)

It is a fact that for reasonable $f$ and $a\leq b$ one has $$\int_{[a,b]} f\ {\rm d}\mu =\int_a^b f(x)\ dx\ .$$ Therefore we tend to replace the notation on the LHS of this equation by the notation on the RHS even in cases where only the Lebesgue integral makes sense.

Go back to the definition of $\int_a^b f(x)\,dx$ as the limit of a Riemann sum. Look at how $\Delta x$ was defined. Therein lies your answer.

I want to answer your question with Lebesgue integrals, as you ask, but the fact is that the machinery for the measure does not take this into account at all (the measure of a subset of $\mathbb R$, using the standard measure or the counting measure, is always positive). I remember having a similar issue with signed area when learning about line integrals (absolute value signs always rub me the wrong way). The answer is that it makes the addition formula hold, even in the Lebesgue sense, in the following way:

I've chosen the limits on the last definition to be consistent with our addition rule, because I can now rearrange to get

which looks identical to the first addition rule, except now $a<b$, so one is a backwards sum. Thus: 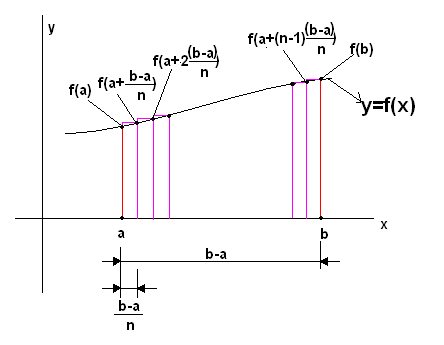 And also we can find the same result with sum of endless small rectangulars areas.

Thus we can write

If we rewrite the sum from end to beginning.

Let's change limits in the integral from $b$ to $a$.

If we use the result that we got above in tag 2.

We can combine with Equation $(1)$ and we get the relation that we wanted to find.

You want that integrals should be additive in the sense that $\int_a^b + \int_b^c = \int_a^c$, i.e. area below graph between a and b, plus area between b and c, equals the total area a to c.

and permuting entries in the first expression gives

Not the answer you're looking for? Browse other questions tagged integration summation lebesgue-integral convention or ask your own question.