Proving formula to find area of triangle in coordinate geometry.

Given 3 points, $A$, $B$ and $C$ in anti clockwise order, I have to find the area of the $\triangle ABC$. The formula is area $=\frac{1}{2}(A_x*B_y+B_x*C_y+C_x*A_y-A_y*B_x-B_y*C_x-C_y*A_x)$. Here $A_x$ is the $x$ coordinate of point $A$, and $A_y$ the $y$ coordinate. Why does this equation work to find the area of a triangle? What is the principle behind it? Why must this be done in an anti clockwise manner? Do note that doing in a clockwise manner will yield negative results(as I experimented). Why does this happen too?

It is an application of cross product, since

Note that it not necessary to take into account the order if we consider the absolute value.

For the calculation you should consider for example

Take also a look here how to calculate area of 3D triangle?

Things are a bit more interesting if the origin is exterior to $\triangle{ABC}$ as in the example illustrated below: 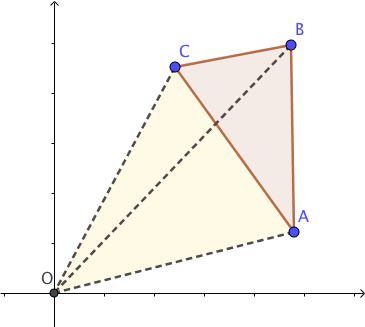 The above isn’t a formal proof, of course, which would require dealing with every possible arrangement of the three points, but it should give you an idea of how the formula works. It’s in fact a special case of the “shoelace formula” for the area of a non-self intersecting polygon, as Landuros commented: you go around the polygon and compute the algebraic sum of the signed areas of the triangles defined by successive vertices. Just as with the above triangle, the excess area that is added due to using triangles with a vertex at the origin gets canceled when you traverse edges in a clockwise direction relative to the origin.

Not the answer you're looking for? Browse other questions tagged geometry triangles area plane-geometry or ask your own question.

0
Computing circumcenter of triangle in 2D with MATLAB
2
solving equation of circles
5
How do you find the equation for the angle bisecting line given three coordinates that make up an angle?
1
A high school coordinate geometry problem
0
How to Do Trilateration?
1
Calculate 3D triangle area by determinant
0
Solving an equation set while finding the coordinates of 3rd corner of a triangle
0
Find third triangle vertex given other 2 and lengths, without trigonometry
1
Given 3 points formed a triangle, test whether the 4th point in the triangle's circumcircle?
1
Triangle inscribed in a circle,2 points fixed and 1 moving. The track of centroid makes a circle but how do I prove it without cartesian coordinate?