intuition behind cyclicality of the trace?

I know how to prove this. I was wondering, are there any intuitive ways to understand why this must be true? One reason why I don't see it intuitively is that I don't really understand intuitively what the trace represents (e.g. geometrically).

First, note that $AB$ and $BA$ are conjugate if either $A$ or $B$ is invertible, and conjugate matrices have the same trace (e.g. because the trace is the sum of the eigenvalues). But the subspace of matrices $(A, B)$ such that either $A$ or $B$ is invertible is dense in the space of all matrices (this is true with respect to various topologies; the usual topology over $\mathbb{R}$ or $\mathbb{C}$, and the Zariski topology over any field), which means the identity must hold in general.

See also this answer for other applications of this idea.

This approach may be a little circular because, depending on your definitions, the easiest way to prove that the trace of two conjugate matrices is the same might be to prove that $\text{tr}(AB) = \text{tr}(BA)$. Here is a definition which does not have this problem: if $V$ is a finite-dimensional vector space, then $\text{End}(V)$ can be naturally identified with the tensor product $V^{\ast} \otimes V$, and then the trace of an endomorphism is given by applying the dual pairing $V^{\ast} \otimes V \to k$ ($k$ the underlying field).

One way to define the trace is that it's the linear coefficient of the characteristic polynomial $\det (tI - A)$. This is a nice definition for several reasons, including that it's manifestly invariant under conjugation (once you know that determinants are invariant under conjugation). You can then prove, in various ways, the stronger fact that $AB$ and $BA$ have the same characteristic polynomial, which implies that they have the same trace (and is equivalent to the claim that they have the same eigenvalues, with the same multiplicities). See this blog post for proofs and discussion.

This approach suggests that one intuition for the trace is that it is the derivative of the determinant, suitably interpreted.

This proof involves the most category theory but it is also arguably the most beautiful. The intuitive idea is to think of taking the trace as "feeding a linear operator back into itself," so it looks like placing a linear operator in a circle in some sense, and then cyclicity follows from rotating the circle. This argument can be made fully rigorous; see this blog post and this blog post for the relevant pictures. After setting up appropriate notation and proving various lemmas, the proof of the cyclicity of the trace looks like this: 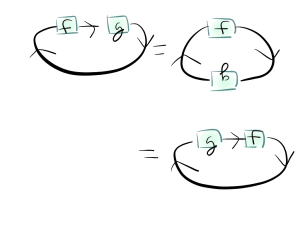 Among other things, approach #3 strongly suggests that the correct name for this property is cyclicity and not commutativity, because it clearly indicates that there is a generalization to cyclic symmetry for more than $2$ matrices: for example $\text{tr}(ABC) = \text{tr}(CAB)$ but is not in general equal to $\text{tr}(BAC)$.

Not the answer you're looking for? Browse other questions tagged matrices intuition or ask your own question.

2
$\mathrm{tr}(AB)=\mathrm{tr}(BA)$ proof
21
How to prove $\operatorname{Tr}(AB) = \operatorname{Tr}(BA)$?
9
Physical or geometric meaning of the trace of a matrix
8
Proof of Cayley-Hamilton Theorem in infinite fields only?
3
Intuition of the cyclic trace property of matrix products and relation to the determinant?