Constraining the results of a division between two "poles"

I often have to do calculations that pertain to musical intervals, i.e. the ratios between two pitches. E.g., the interval that commonly we call a "major third" (c-e, d-f# etc.) can be expressed as a 5/4 ratio (in so-called "just intonation").

Say I wanted to calculate the pitch that we arrive at after stacking a few such major thirds on top of each other:

Doing my maths with pen, paper and my head most of the time, none of this is a problem. I simply halve, double, etc. the nominator or denominator, and that's it (here: double the denominator).

But how would we solve such a problem in an automated way? I admit to using Excel once in a while to work on my music theory stuff (besides a dedicated application called "Scala" which is of little help in this specific problem). Suppose you only had Excel available as a tool, how would you go about it? How would you constrain the result of a division between two poles? Any advice is appreciated!

Here is a screenshot of a bit of Excel sheet that used a variation on this formula. [Corrected from original posting.] Hope it helps. (In case you're wondering, the formatting for the fractions is a custom format string, #######/#######. 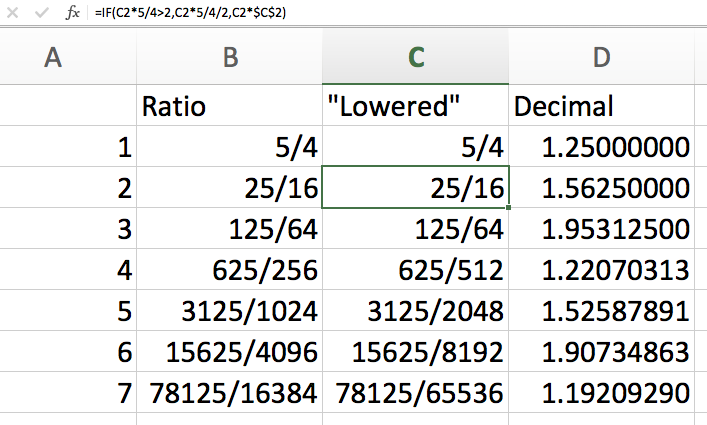 You could also do this using the frequencies, instead of just the ratios, if you divide by $2$ when the result is twice the original base frequency or greater. 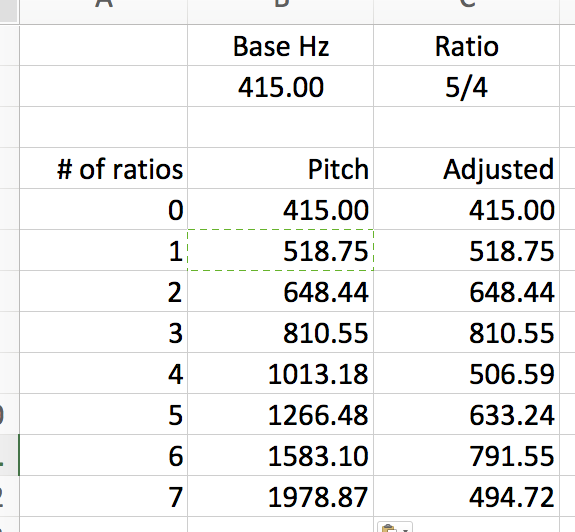 On terminology: Given a frequency ratio, you're asking to canonicalize the ratio. That means you are finding its canonical form, or in other words, the canonical representative of its equivalence class modulo $2$.

Not the answer you're looking for? Browse other questions tagged fractions music-theory or ask your own question.

24
Why isn't a harp in a logarithmic shape?
6
What is Octave Equivalence?
59
How many 7-note musical scales are possible within the 12-note system?
0
How to tell / quantify how much a number is close to some simple integer ratio?
0
Is there a proof that no rational number splits the octave equally?