Are these two logical statements equivalent?

Translate the following into logical notation:

Nobody is despised who can manage a crocodile.

It states the answer as being $\forall x (M(x) \rightarrow \neg D(x))$. But would it also be acceptable to say:

Yes. They are equivalent.

The first equivalence comes from the familiar relation between the two quantifiers; the other equivalences should all look compelling given what you know about about e.g. the equivalence of $\neg(A \to B)$ and $(A \land \neg B)$.

(Careful: what I've just said is supposed to be motivational, give you a sense of why the equivalences hold. A proof in e.g. a natural deduction system will be more complicated since you can't apply connective rules directly to the innards of a wff inside the scope of a quantifier!)

Nobody is despised who can manage a crocodile

I would say that it would be a more direct translation, since it maintains the structure of the sentence being translated.   Vis: "There does not exist somebody who is despised and can manage a crocodile."

They are, however, both equivalent in first order predicate calculus, and some lecturers will prefer you to avoid leaving expressions with negated quantifiers as a matter of style.   So $\forall x~(M(x)\to\neg D(x))$ ie "Anybody who can manage a crocodile is not despised," is also viable.

Though so is the contraposition: $\forall x~(D(x)\to\neg M(x))$ ie "Anybody who is despised can not manage a crocodile."

Well, anyway, what ever final form is preferred by your lecturer, it never hurts to show your working in an exam or assignment.   (Indeed it is preferred that you do so.)

One nice way to see the two statements are equivalent is by using Venn Diagrams.

We can represent the sentence $\forall x (M(x) \rightarrow \neg D(x))$ in a Venn diagram as follows: 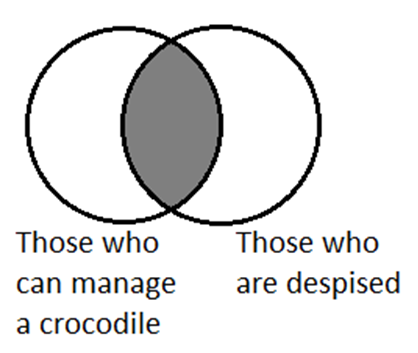 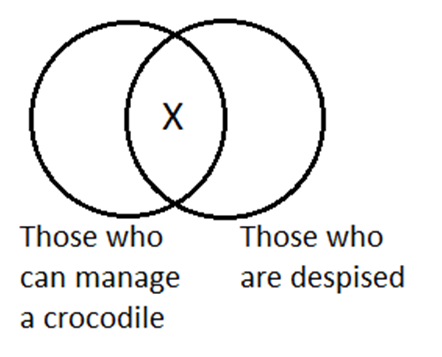 This time, we put an 'X' in the intersection, indicating that there is at least one object there, capturing $\exists x (D(x) \land M(x))$

Not the answer you're looking for? Browse other questions tagged logic predicate-logic or ask your own question.